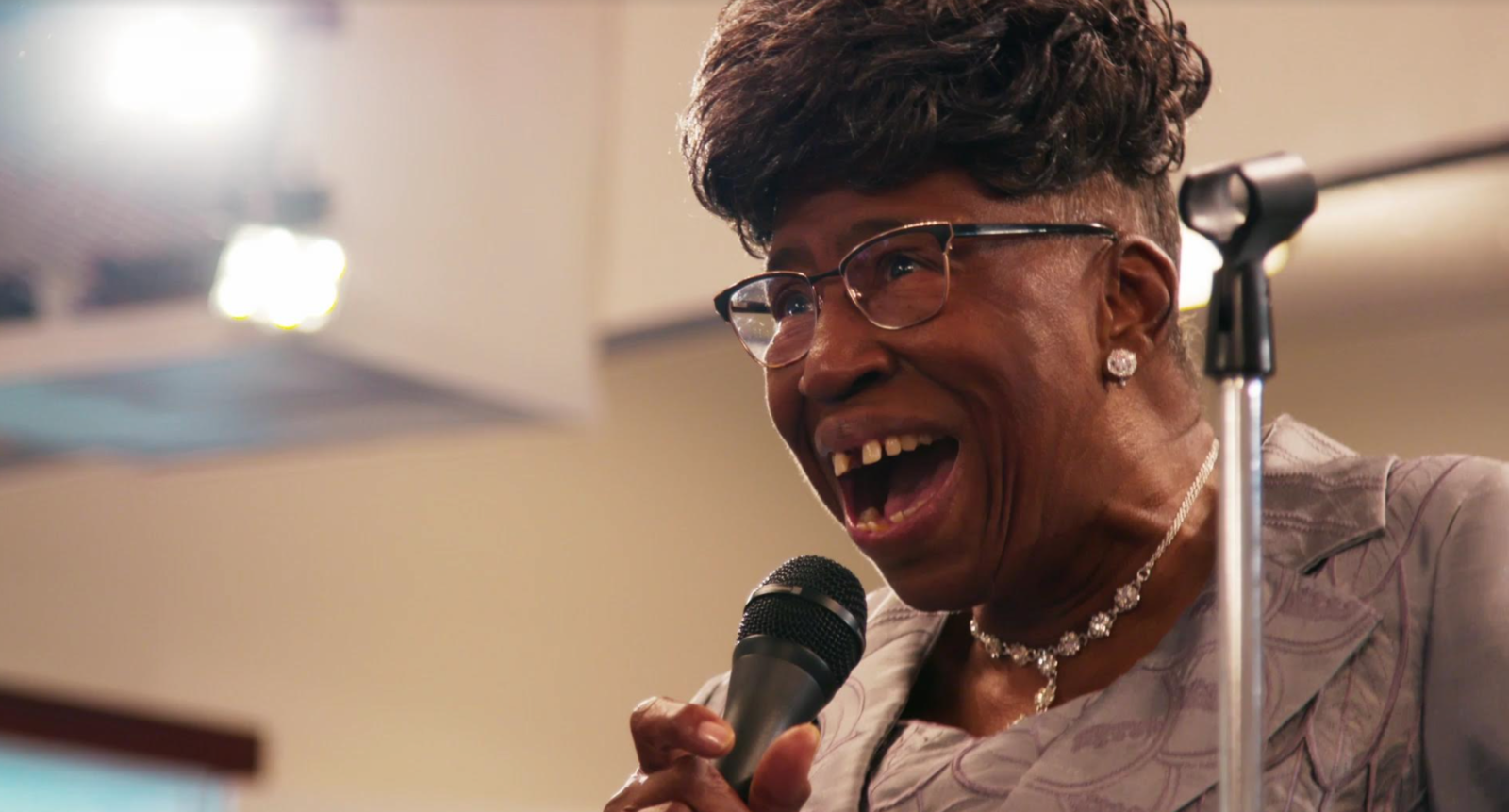 The new documentary by Spiritual Helpline, Stay Prayed Up, follows gospel sensations the Branchettes as they record their album of the same name. The leading lady is Johnston County, North Carolina, native Lena Mae Perry, who is 83 years young and known to everyone as some form of “mother.” She’s accompanied by pianist Wilbur Tharpe who has long, noble fingers that dance over the keys of the piano. They’re receiving help for the album by local artist Angela Kent, the local North Carolina music group the Guitarheels, and guitarist Phil Cook, who is part of Spiritual Helpline Records.

The Branchettes formed as a group of women founded by Perry and the late Ethel Elliott, who would travel and tour from church to church spreading the gospel through soulful and traditional music. Some have left, and others have gone on, but Lena and Wilbur are dedicated and grateful.

Though the group got its start in the 1980s, the name and Perry herself hearken back to the 1950s when Perry’s childhood was spent in the pews of the Long Branch Disciples of Christ Church. She sang as a child and then joined her church’s Sunshine Band that would tour other churches on special occasions. Perry grew up in a musical family and home and carried that with her throughout her career.

“I don’t show off too much when it comes to dealing with God,” Perry says at one point in the film, her arm extended defiantly and her finger pointed towards the air. “He’s got to be in the midst or I need to go somewhere and sit down.” Perry’s faith is a throughline in the documentary, but even more telling is Perry’s effect on those around her.

Early in the film she talks about having to tie tobacco on sticks to dry it out as a child. She said she thought her life was hard, but it wasn’t. I’m here to report that it definitely was, but Perry internally reframed the rhetoric and changed her complaints to praise of God for letting her see another day.

Perry is like a flame that draws in those who are like-minded. She’s kind, she’s a hard worker, and she’s compassionate. She strives to be everything that the phrase “Christ-like” entails, which is a refreshing take in a world where many claim to operate in the name of Jesus without a clear handle on the Golden Rule: Do unto others as you wish them to do to you.

Phil Cook is the creator of Spiritual Helpline, the recording company that is responsible for producing the Branchettes album. From the moment you notice him on the screen, vibrating as the music nearly leads him to tears, you can feel his authenticity. Born in rural Wisconsin, he jokes lovingly about the staunch hymns of his youth. As he started to travel and perform with his band, he became exposed to true Southern gospel music. He found he had so much to learn and he seems to be dedicating his business to doing just that, along with creating resources for other artists to thrive.

This is notable to me, because when we talk about allyship, a big topic is the idea of “take it and make it better” that can sometimes happen when white people learn about something in another culture. Now, the definition of better is clearly subjective, but it can cause friction. I grew up a church girl and knew every song that played. There’s something very personal and very proprietary about that type of music. Perry says of Cook that she loved him. “He can sing, and he falls right in line with the other children.” Sure, Cook is in his forties, but with her being aged 83, I’m sure everyone is “children.”

The point is that Cook seems to listen and is glad and happy to do it. He has not just an admiration for Perry, but a respect. He respects her talent and the craft and does what he can to forward the mission without taking it over. In a very sweet scene, he tells the camera guys to start recording the moment Perry and Tharpe step into the room. As soon as they do, they deliver on Cook’s expectations immediately. He’s ecstatic that others get to share on what is surely a masterclass in gospel music.

As a main character Perry is surely worthy. She’s humble, maybe to a fault, but she’s not shy and she’s not quiet. They call themselves a “noisy crew.” At one point she tells Cook to check on the mics because she’s so loud. Cook replies jovially, “That’s why we’re recording this album — because you’re so loud!” and Perry laughs. It’s these small moments where the music is so ingrained in them that it’s second-hand.

During a rehearsal session they debate about whether a song should be in G or C. Perry knows she’s right but allows a bit of trial and error. When the correct note is finally played and everything clicks into place, she doesn’t gloat — she’s just happy. She’s spending her life doing what she loves, and as long as she wakes up every morning she’ll continue to do so.

There are a few talking heads from people who have known Ma Perry for their entire lives. There are people she’s sang with and for, but the true storyteller is the music itself. It’s almost a mini-concert as we hear long snippets from gospel greats. “I Don’t Feel No Ways Tired” and “Nothing But the Blood of Jesus” are loud and impromptu but so solid. They don’t over-rehearse, and the lack of rigidity allows for beautiful piano solos and soulful melisma.

All in All, Stay Prayed Up is a beautiful documentary with soothing and engaging music and wonderful characters. The documentary released theatrically on Friday, June 17, 2022, and will be available OnDemand, July 5.