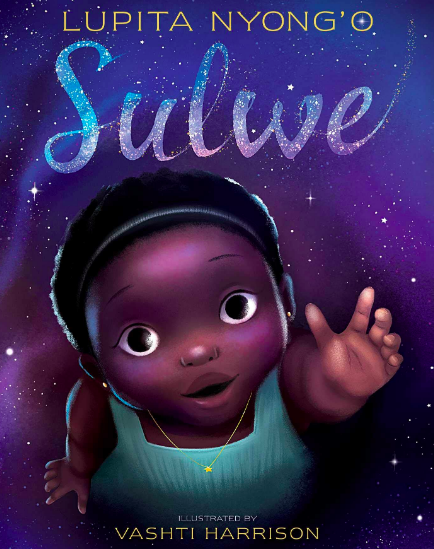 Oscar award-winning actress Lupita Nyong’o’s first picture book Sulwe is a poignant and beautifully illustrated story that acts as a mirror for dark-skinned Black children who are poorly represented in literature.

It sends a powerful message of self-love and offers a window into a perspective that’s often ignored. But most importantly, it critiques how we, as a society, need to change not only our language but also challenge our internal biases.

After being teased by classmates for her midnight-colored skin, Sulwe, who comes from a multihued family, goes on a mission to obtain light skin like that of her sister, Mich. She tries everything from rubbing her skin with an eraser and putting on her mother’s makeup to eating food that is “bright” and “light” to achieve “the color of high noon” skin tone that she wants to gain acceptance from her peers. When those skin lightening attempts do not work, Sulwe prays that she will wake up in the morning with light skin, only to arise the next morning to see that she’s still dark.

Not even her mother’s words of, “Brightness is not in your skin, my love. Brightness is just who you are,” can console her. One night a star sent by the Night comes down from the sky and takes Sulwe on a starry adventure, telling her the story of the sisters, Day and Night.

Sulwe learns that at the beginning of time, the sisters weren’t viewed the same. Night was also mistreated for her darkness by humans, called “ugly,” “scary,” and “bad,” while her sister Day was praised. Night runs away, leaving them with only her sister Day, to never see darkness again. But when Day grew too long, the humans wished to have Night back to get the “deepest rest.” Day showed her sister that there was elegance in her darkness, and that’s when she was the most beautiful.

Illustrator Vashti Harrison magnificently captures the narrative down to the smallest detail. Sulwe isa Luo term meaning “the star,” and the character dons a star necklace throughout the story to signify that she’s been carrying brightness with her the whole time, not only with the jewelry but also her name. The glow in Sulwe’s eyes and the sparkle coming from her star necklace are tiny details that seem insignificant but actually support the broader meaning of the story.

Vashti even incorporated Lupita’s Nairobi blue Prada gown worn at her first Oscar appearance in 2014, drawing Sulwe wearing the same dress and headband. That was the same night that Lupita won her first Oscar, making history as the first Kenyan to receive an Academy Award.

Sulwe is partially a memoir, based on Lupita’s real-life struggles of being a young dark-skinned girl growing up—strife she spoke on in her 2014 speech heard around the world about Black beauty at the 7th Annual Black Women in Hollywood luncheon, where she was honored for her role in 12 Years a Slave.

In that speech, Lupita began with reading a portion of a letter from a fan who confessed that she contemplated purchasing African pop singer Dencia’s Whitenicious, a skin lightening cream, until Lupita appeared on the Hollywood scene and saved her. Lupita then told her own story of a time when she felt “unbeautiful” and how her mother and supermodel Alek Wek were her saving grace.

“When I was a teenager, my self-hate grew worse — as you can imagine happens with adolescents. My mother reminded me often that she thought I was beautiful, but that was no consolation. She was my mother. Of course, she was supposed to think I’m beautiful. And then Alek Wek came onto the international scene. A celebrated model, she was dark as night, she was on all the runways and in every magazine, and everyone was talking about how beautiful she was. Even Oprah called her beautiful, and that made it a fact. I couldn’t believe that people were embracing a woman who looked so much like me as beautiful.”

She finished her speech explaining that beauty wasn’t something a person could obtain or consume (“You can’t eat beauty,” as her mother told her); instead, she, just like Sulwe, had to be it. You have to have compassion for yourself as well as for others. This is what the story of Sulwe provides — an empathetic look rather than a judgmental one.

Colorism, discrimination based on skin color, is ever-present, especially within the Black community, which often denies its existence. Narratives from dark-skinned individuals are met with apathy or denialism. Some reduce it down to having a “preference,” ignoring that preferences can be steeped in prejudices.

It’s more than not finding someone attractive. Dark-skinned people often receive harsher sentencing in the criminal justice system than their light-skinned counterparts, they are two times more likely to face the death penalty, they are highly susceptible to facing job discrimination, they are seen as less smart even if they have a degree, and much more. Even in our language, we continue to use “dark” as synonymous with “evil,” “scary,” “horrible.” Whether unconsciously done or not, the negative impact is severe for dark-skinned individuals. We have to confront the images that we are exposed to regularly to dissolve our prejudiced thinking.

Sulwe is one of the many books written by Black authors who are pushing for representation to boost the self-esteem of young Black girls and boys. The story of Sulwe is a much-needed piece of literature that’s carving out space for Black children to see themselves and the brightness that they already hold inside.

Sulwe is currently available on Amazon or wherever books are sold.