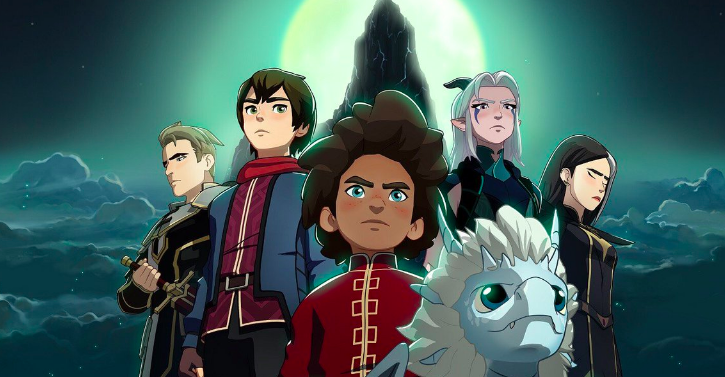 The Dragon Prince on Netflix is, without a doubt, a top contender for best fantasy computer animated series.

Since its premiere in 2018, it has managed to capture the attention of many viewers for its wide range of characters and diversity. The creative minds of Aaron Ehasz and Justin Richmond have together created a work that allows its audience to dive ever deeper into the fictional world of Xadia. Magical creatures, mystical elves, a mysterious otherworldly being, and strong female leads all together make this a fantastic series. Currently, it has three seasons out, and audiences are eagerly awaiting its fourth to pick up where it left off.

The show has a slow burn to it. It begins by establishing its characters firmly in the world of Xadia where its inhabitants are currently at war with their neighbors — the human territories are at war with their magical counterparts. While the characters begin to come into their own, each individual must understand their place in an ever-changing society. This must-watch animated series pushes forward the concept that vulnerability, compassion, and friendships are the most powerful abilities any of them can possess.

The Dragon Prince provides an array of vastly impressive and drastically different characters. The king, Harrow, is voiced by Luc Roderique, a single Black father, whose wife passed away. Alone, he raises his two sons, Ezran and Callum. The main protagonists include: Ezran, a 10-year-old prince, voiced by Sasha Rojen; Callum, stepson to the king and voiced by Jack De Sena; and Rayla, a moon elf voiced by Paula Burrows. Each one of these voice actors bring something special and authentic to these characters. These unlikely heroes run away in an attempt to make right what their kingdoms had wronged.

The cast is not complete without its supporting characters. At times, they even steal the show with their interesting narratives that pull on our heartstrings. Viren, voiced by Jason Simpson, serves as the king’s closest advisor and friend who is also a dark mage. He sends out his children, Claudie and Soren, to search for the princes. Claudie is a dark magic apprentice voiced by Racquel Belmonte. Though her magic is in the dark arts, she still manages to care deeply for everyone around her. Her loveable and adorable brother, Soren, is voiced by Jesse Inocalla.

No ensemble is complete without the antagonist of the series. It would be nearly impossible to state who exactly the villain is, but that is what makes this show so binge-worthy. The war that Xadia is currently experiencing happened before our heroes are even on the scene. They are in effect burdened with their fathers’ choices. As unclear as his role as the evil character is, Aaravos, voiced by Erik Dellums, presents a suspicious entity whose history is unclear to anyone who is currently alive.

While experiencing this visual feast, a few aspects manifest themselves as simply noteworthy. As the title suggests, the dragon prince stands out as the cutest blue baby dragon on the show and is a must-see for dragon lovers. The gorgeous artwork, designs, and landscapes are worthy of note, and the realistic story arcs for each character accurately depict real situations. The narratives feel authentic and believable. The adventures they go on both reinforce our ideas of the fantastic world while also finding ways to surprise and challenge our understanding of what is possible.

The fantasy world presents a more beautiful interpretation of characters and acceptance. Gay elves who adopt a child are not ostracized. Lesbian queens can rule a kingdom together and have a child without prejudice. Then that very child can rule her mother’s kingdom with wisdom and fair judgment for her people. People with disabilities are not seen as incapable as the prince’s aunt, General Amaya, demonstrates in the series. She is able to run an army without verbalizing her commands.

Though the world is fractured and ravaged by war, the show manages not to pin or divide people based on their sex, sexuality, or disability. It allows characters to see the similarity and build friendships instead of seeing what makes them different. Characters are forced to make difficult choices in their lives for the greater good, yet sometimes, it hardly seems worth it for their own families.

With the release of Season 3, the narrative only gets more complicated. The folklore is further developed, and the backstories are enriched with every episode gearing towards the season finale. The next season will hopefully further our understanding of Aaravos and the fate of the dragon prince. This is a must-watch for any fantasy fans out there who are searching for a new series.