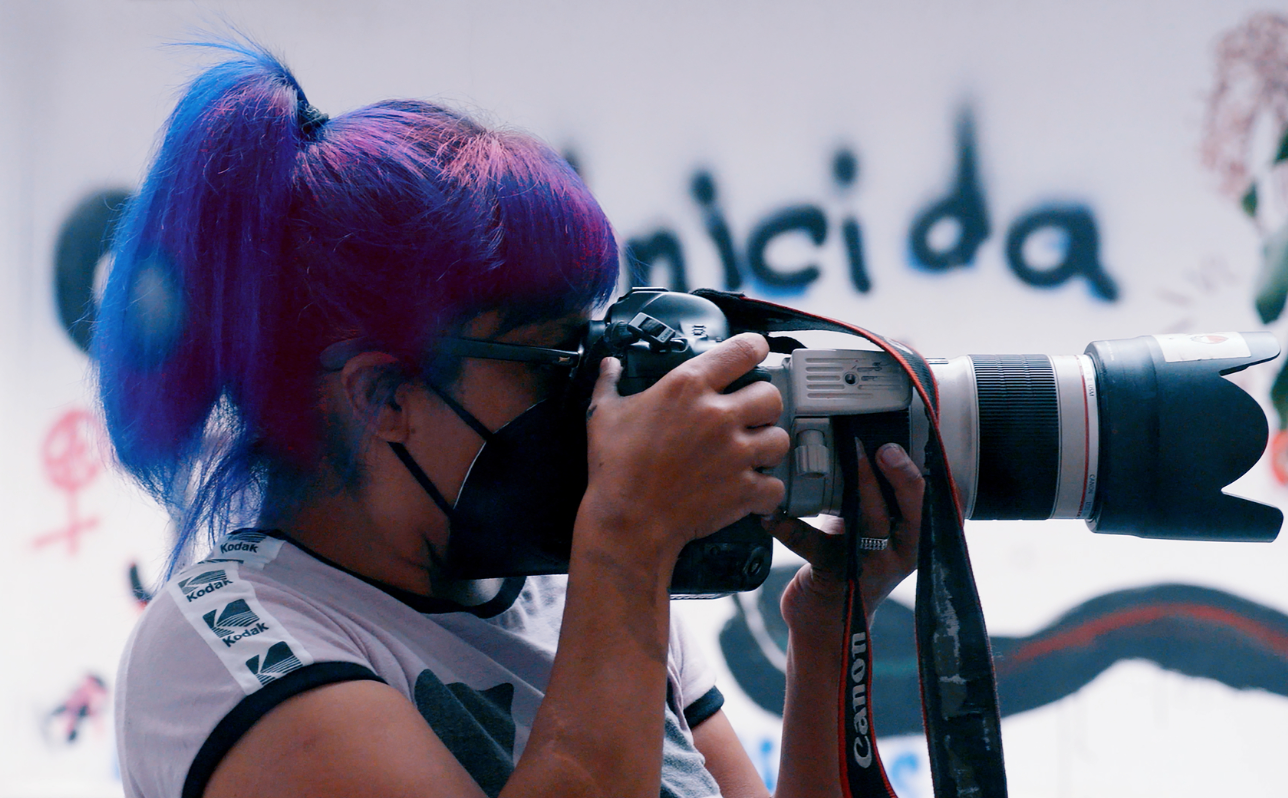 I seem to have a knack for finding the most upsetting documentaries to review.

For some incomprehensible reason, I guess I thought that, after reviewing a documentary covering one of the world’s worst nuclear disasters, it would be a blast to watch another one, this time about the death of fact-based journalism: Endangered.

And this is not to say that Endangered’s director/producers Heidi Ewing and Rachel Grady (Jesus Camp, The Boys of Baraka) have made a bad product. On the contrary, this might be one of the most arresting films I’ve seen all year. Like all good art, it will stay with me long after its runtime is complete. This is to say, however, that this is uneasy viewing.

Besides following journalists and photographers as they run into various roadblocks preventing them from reporting the facts of a situation, the movie also takes place in 2020, arguably one of the worst years in recent history.

Endangered has it all: the COVID-19 pandemic; the George Floyd protests; Trump’s stolen election claims; and the January 6 insurrection that followed. If you wanted a yearbook of all your worst recent memories, this documentary is it.

And yet, despite this — or, more likely, because of it — this film is a masterpiece.

Sure, the formatting and structure are not revolutionary. We simply watch people go about their lives and occasional captions give us the facts behind one situation or another. And, yes, the videographer has a penchant for recording people’s animals going about their own lives as, I’m not sure what? Establishing shots? It’s pleasing aesthetic without much substance behind it. I’m not offended at that, just curious.

But the film is masterful because, in highlighting these events, in taking us back to that year, it reminds us how necessary a free, truthful press is.

Endangered follows four journalists from four different countries. There is Patrícia Campos Mello of Folha de São Paulo in Brazil, Carl Juste of the Miami Herald, Sáshenka Gutiérrez of the Efe News Agency in Mexico City, and Oliver Laughland, an English reporter for The Guardian living in America. Of the four, Patrícia and Sáshenka tend to have the most compelling stories, as their lives appear to be in actual danger being women reporters.

For Patrícia, the problem is that, through her reporting, she has made an enemy of the populist, far-right president Jair Bolsonaro. He heard about her articles detailing a “disinformation campaign” he ran during the 2018 election cycle and, in turn, he claimed that she used sex to gain information. I would quote him, but I’m certain what this acting president said to news cameras is actually too graphic for this particular website. Later in the film, we watch Patrícia’s attempts to sue the president for slander. Since, by this point, we have also learned about the high mortality and disappearance rate among Latin American journalists, we also have a queasy feeling that it might be best for Patrícia to just leave it alone, if only for the sake of her safety and that of her young son’s.

For Sáshenka, the problem is that she is a woman journalist in Mexico, the Latin American country with by far the largest share of reporter deaths and an equally, disturbingly high number of “femicides” per year.

Though she is not the specific target of a powerful politician like Patrícia is, Sáshenka is still a victim of the anti-media, anti-women attitude the police of Mexico City seem to have. At one point later in the film, we see the aftermath of her getting detained while covering the 2020 feminist uprisings in Mexico City. Sáshenka has been blocked from taking photos, separated from her crew, and, off-camera, shot with a paintball gun in the chest sometime before or after having been grabbed by the neck and slammed into a wall. In a later video diary, she recounts the event, but the entry is largely silent. Mainly, it’s Sáshenka collecting her thoughts while she smokes a cigarette and her eyes redden.

The other journalists in the film — photographer Carl and reporter Oliver — have equally compelling insights, though their personal narratives are less interesting. This is not to say uninteresting, mind you, just less pressing than the visceral fear we feel for the documentary’s Latin American women reporters.

We follow Carl and Oliver, one in Florida, the other all over the Midwest, respectively, as they look at the effects of Trump’s anti-media campaign. Carl says in his thirty years as a journalist, he has never seen this level of intimidation directed towards the press — especially from police and political forces. Oliver spends much of his time talking with MAGA conservatives — the ones who will actually speak to him — about reality and their perception of it. To them, he is a member of the dishonest, disloyal Liberal Media dedicated to taking down the best president they’ve seen in years. To him, they are victims of information vacuums, the product of getting one’s news from memes on Facebook.

During the Oliver and Carl portions, we learn about American “news deserts,” counties with only one local newspaper or none at all. We see the shuttering of a Youngstown, Ohio, newspaper, which makes that city the largest in America with no local paper. A conversative woman to whom Oliver speaks doesn’t mind this outcome. She feels it’s a natural consequence of liberal-run papers not reflecting her or their constituencies’ views.

Meanwhile, Carl’s Miami Herald files for bankruptcy and is bought by a hedge fund. As a result, they close the newsroom and Herald journalists must work from home indefinitely. Towards the end of the film’s run, Carl asks a documentarian how long until the movie is released. We don’t hear the answer, but we do hear Carl say he’s not sure if he will still be at the Herald by then. As his son says, only time will tell.

This is one of the best movies I’ve seen this year, and I highly recommend it.

It ends with the slightest glimmer of hope, an ember of, if not joy, then resilience. All four journalists explain how and why they do what they do. The truth must get out there. It can be a dirty job, but someone’s gotta do it.

I say the film is masterful because I feel that, years from now, it will be a perfect time capsule not just of 2020 but of an era wherein “fake news” as a phrase became a weapon, a cudgel of demagogues with which to smash their supposed opponents in the always nebulous, always nefarious media, especially when those folks started reporting facts they didn’t like.

It may not be easy, you may not even fully agree with it, but you will be better for having seen it. Like the best reporting, it gives us uneasy realities with no simple answers.

In that sense, it respects us enough to give us the truth.