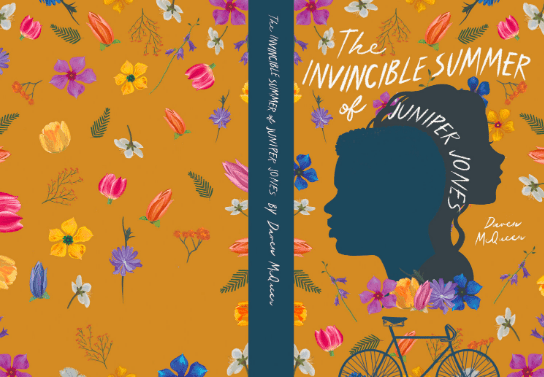 As the world continues to vibrate with the truth of what it means to be Black in America, many people are examining media in ways they never have before. Some are thinking more critically about what they read and watch, becoming more intentional about how they show their support with views and dollars. Fellow Black people have come together in monumental and historic support of Black creators and activists. And white people, well…they’re at last becoming aware of Black creators and activists. We’ve all gotta start somewhere, I suppose.

As for me, my agenda here remains consistent, and I will continue with what I have been trying to get people to do in every book review I’ve ever written: Read. More. Black. Authors.

At this particular moment in time, The Invincible Summer of Juniper Jones is not an easy read, but it’s a powerful one, especially in the YA genre. While this is a novel of historical fiction, the feelings of discrimination, injustice, racial isolation, fear, resilience, and hope are as true as any textbook.

The story takes place in the mid-1950s. After getting into a fight back home, mixed-race teenager Ethan is sent by his single white father to Alabama to live with his aunt and uncle. Isolated among family who doesn’t know how to interact with a Black boy and townsfolk who simply do not want to, Ethan tries to lay low as he adjusts to the stark cultural differences between life in his northern home of Arcadia and down south. But how does he adjust when every step he takes is under the reproachful eyes of bigotry?

One ray of hope and reprieve lies among the hostility — Juniper Jones, a chattery redhead who sees Ethan as a friend, rather than an interloper. Once she sets her sights on him at the malt shop, her eclectic brain begins concocting a plan for the greatest summer of all time. She’s determined to show Ethan every bright and sunny thing Ellison, Alabama, has to offer. Yet despite her cheerful nature, she cannot protect him from the realities of being a Black boy in an all-white Southern town where segregation still has its stronghold and Confederate flags fly high.

Daven McQueen does an excellent job of personifying bits and pieces of history that often get lost in the academic and post–Civil Rights era discussions. The picture McQueen paints of Ethan’s daily reality deftly captures the spectrum, from microaggressions to life-threatening racial tensions — interracial marriage, biracial children, North and South divides, colorism, and the endless array of nuance that comes with these depictions. Ethan’s story prioritizes the feelings and emotions of a young Black boy trying to navigate these complex socio-political hurdles.

Although the setting wonderfully establishes the time period of the story, I felt a constant reminder that this is a picture painted of a time that is not far in the past. The majority of the story takes place in 1955, but the opening begins with an older Ethan in 2015. It served as a constant reminder to me that so many Black people who are alive today experienced the racism present in the black-and-white photos of history books, the archetypal depictions of racism that so many white people are quick to label the “distant past.” Yet so many of Ethan’s experiences still mirror the present-day reality of Black boys everywhere, from white people crossing the street when he passes by to the unspoken but blatant discomfort of older white women having to occupy spaces with him.

ALSO READ
Review: 'Scenes from My Life' by the Late Michael K. Williams

This book is also a glaring reminder that the white people responsible for perpetuating the blatant hatred of the ’50s and ’60s did not just disappear. They are a lot of people’s parents and grandparents, and we need to remember what that means for all the marginalized people they’ve been interacting with for decades. While McQueen’s depictions of accountability and white responsibility were often appropriate, the treatment of the “good” white characters did feel somewhat overly generous at times, particularly with the eponymous Juniper Jones.

Juniper was a textbook manic pixie dream girl, and I’d be lying if I said I wasn’t at least mildly annoyed with the way the book frames young white women as, at worst, naive but always ultimately having Good Hearts™ to accompany their very ethereal-sounding beauty. It seems that in many cases, the younger and more doe-eyed the white girl, the more likely she is to be treated as a martyr for demonstrating basic human decency towards Black people. I wish this book had been more honest about the active and malicious forms of racism that white girls and women have perpetuated, especially for this time period. Instead it took the common route of glorifying young white women as the epitome of innocence and “good whiteness,” complicit to racism only in their moments of passiveness. So if you’re a Black woman who is uninterested in these fantastical depictions of white girls, particularly from the perspective of a Black male character, this may not be the book for you.

But if you’re willing to stick it out through some of these shortcomings, I still highly recommend it. Will it be hard to read at times? Absolutely. Will the narrative hit especially close to home in this summer of 2020? Definitely. But there remains something powerful in the feeling of being seen, and this book beautifully captures the particular type of anger I’ve been feeling lately as a Black person in America. The hope that is often mirrored in this story of a society on the precipice of the Civil Rights movement, the hope for revolution and change, resonates hard.

The Invincible Summer of Juniper Jones is a gripping depiction of how the past remains with us. It is a narrative deeply threaded with historical reality. Most importantly, McQueen’s debut novel brings to the forefront a common desire that is being echoed by Black voices across the globe today and always — the desire for peace and safety for our Black boys.