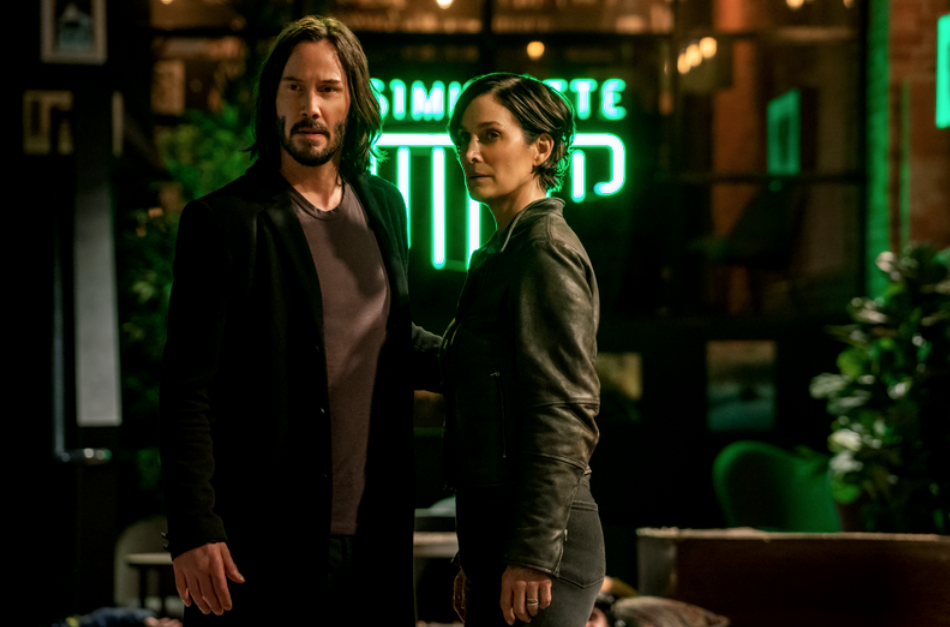 “This feels so familiar,” Bugs (Jessica Henwick) says as The Matrix Resurrections opens on an almost identical scene to the original Matrix film. Agents surround the same Heart O’ the City Hotel where Trinity (Carrie-Anne Moss) first blew our minds with her slow-motion leap back in 1999. Just as the audience is familiar with these visual cues, so is Bugs, and we all know something is off. Agent Smith is Black (Yahya Abdul-Mateen II’s first appearance on screen) and Trinity (not Carrie-Anne) gets caught, rather than flying through the air into an impossibly small window and escaping back into the Real World.

For the next chunk of The Matrix Resurrections, the visual echoes back to the original trilogy taking place in what appears to be an entirely new timeline where The Matrix is a global blockbuster video game trilogy and Keanu Reeves’ Thomas Anderson is the nerdy rockstar designer who changed the narrative. Thomas is shocked when his business partner (Jonathan Groff, who doubles as Agent Smith) says their distribution company wants a fourth Matrix, not the new game he’s been designing. Trinity (Carrie-Anne Moss) is now Tiffany, a disgruntled housewife with three children and a cameo husband fans will chuckle to recognize. Thomas is secretly fascinated with her but too shy to make a move.

Also, this version of Thomas clearly has severe anxiety issues, barely able to contain his nerves, and seeking out his analyst (Neil Patrick Harris) for more of the blue pills he must take daily after his near-death after trying to fly off a building, believing he was Neo from his video game. That is until Bugs finds “Thomas,” shows him her white rabbit tattoo, and tries to convince him that he is, in fact, Neo, and he’s been plugged back into the Matrix for almost 60 years since his supposed death. To make matters worse, the “new” Morpheus (Yahya’s true role in this film) is like the “new” Oracle in The Matrix Revolutions, just different enough to make Neo continue to doubt his reality.

This was the moment where I started to get as stressed and upset as “Thomas,” wondering whether director Lana Wachowski had created this new chapter just to mess with us. Even when Neo is brought back into the Real (albeit very different from the original) World, I wrote this note: “But is any of this ‘real’ or is it the video game part four? How can we know for sure?” The past two years of pandemica have blue-pilled me into knee-jerk cynicism. But then I remembered that Wachowski actually likes her fans, considers us a part of her extended community, and wouldn’t have revived this franchise to cause us pain. So, I chose the red pill and settled into the beauty of this fourth and most fabulous Matrix film, and it was a homecoming in so many ways.

“Nothing comforts anxiety like a little nostalgia,” and Resurrections leans right into Alice’s looking glass with easter eggs aplenty from the first three movies, some in your face, and others cleverly tucked into the corners of rooms. But what is markedly different in Resurrections is the openly celebrated queerness that dominates the entire film, where the cishet actors (as well as white ones) in the cast are in the minority.

Once upon a time, The Matrix trilogy was a secret allegory of the transgender experience since its creators were both closeted trans women. It’s only recently Lilly Wachowski revealed this to be an intentional fact of the film. So with this information out of the closet, the open critique of the binary — from code to gender — in Resurrections is truly a wonder to behold. As Lilly and Lana Wachowski have become de facto moms/aunties to generations of queer folks as we (myself included) found our real selves with the help of The Matrix‘s metaphors, in Resurrections we see how Neo and Trinity have similarly become imaginary parents in this regard, raising several generations of Real Worlders through the memory of their heroic acts of martyrdom that did fundamentally change that world.

In our nonfiction world, it wasn’t until Resurrections that I realized how much my heart was broken that Revolutions ended with Neo and Trinity dead. To see them brought back in Resurrections in such a thoughtful, meaningful, and beautiful way was a healing experience — a concrete step toward wholeness and with it hope for a potentially magical new future, not the hellscape we’ve all been imagining as we enter the third season of pandemica. I didn’t realize I was crying until I felt the drips off my chin; I was fully immersed in this strange world I have loved since opening weekend 1999.

Resurrections tackles a lot in its 148 minutes, including introducing an entirely new inclusive cast (racial representation gets an A+) with the bonus of several familiar characters, some with their original faces. The same philosophical questions of identity and self of course arise, as well as important critiques of commercialism, consumerism, and that wicked force of capitalism that treats human bodies like coppertop batteries. It also manages to lovingly touch on themes of grief, loss, and trauma in compassionate ways, reminding me of the Sense8 clusters that are marked by shared empathy. “Why does this story feel like a memory?” Trinity asks Neo, and this one line resonates on multiple layers. All the motifs in Resurrections touch on the very essence of being human, but arguably the most important is the transformative power of love. It’s easy to forget that at its core code, The Matrix has always been a powerful love story. But in Resurrections, this fact takes on an entirely new meaning.

Yes, Trinity and Neo have romantic love, and it’s one of the only heteronormative constructs left in the Matrix franchise. But theirs is also such a deep and universal love that it has become a binding agent, for the Matrix within the story, but also in the Real World, as it continues to create chosen families along with the intense love Neo and Trinity feel for each other. They might not have created children with their genitalia, but they have filled the Real World with their rescued children, even in the decades they were presumed dead, through the mighty force of their love and their sacrifices for their chosen family. There’s nothing queerer, or more life-affirmingly glorious, than helping build home and community for people who have been abused by a destructive, parasitic system that wants to force them to be who they are not and pretend to like it.

The Matrix Resurrections isn’t just a badass revival of a beloved sci-fi franchise, it also has impeccable comedic timing that hits exactly the right notes to bring us deeper into this exquisite new worldbuilding while also honoring all the storytelling that came before. Even better, I love how Keanu Reeves and especially Carrie-Anne Moss were given permission to age on screen and they weren’t CGI’d into creepy youngface oblivion. Representation in this movie helps reinforce an entirely new bar for Hollywood.

“That’s the thing about stories. They never really end, do they? We’re still telling the same stories we’ve always told, just with different names, different faces,” Agent Smith says. The Matrix Resurrections is both a trip down memory lane as well as an entirely new take on the franchise. Even if future films only revolve around Trinity and Neo painting the sky with rainbows, I am joyfully and unconditionally along for that ride.

Sezin Koehler is a multiracial Sri Lankan American, uncertified Scream Queen, and Frida Kahlo devotee who writes about foreign films, horror, social justice, and representation for Black Girl Nerds. You can also find her on Twitter ranting about politics (@SezinKoehler), or Instagramming her newest art creations and tattoos (@zuzukoehler).

Hey Indie Creators! Your Song Could Win $15K and a Spot in ‘The Matrix Resurrections’ Campaign