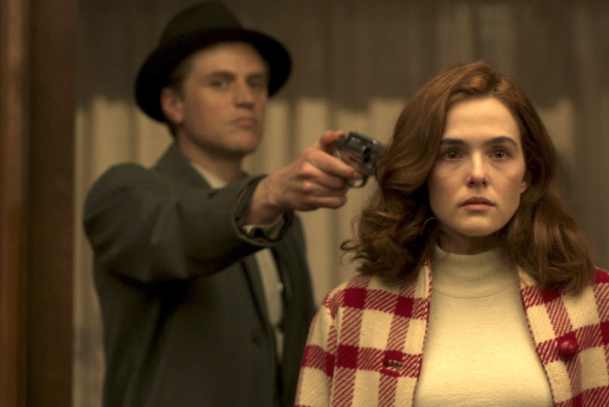 In the age of extensive effects, massive budgets, and huge names, The Outfit director Graham Moore chose a quieter approach that is no less thrilling. The Outfit is a period gangster movie set in mid-’50s gangland Chicago. Filled with twists and turns, The Outfit will leave you guessing until the very end and keep you enthralled with capable performances from a plethora of talent.

We follow Leonard “English” Burling (Mark Rylance) as he attempts to run an above-board mens’ bespokery. English has moved to Chicago following an apprenticeship on Savile Row, where he learned to be a “cutter” (not a tailor, as he makes sure to clarify several times throughout the film) and ran his own shop. He relies on his trusty receptionist, Mable (Zoey Deutch) with whom he has an amicable relationship. Business is good except for one hiccup; most of English’s biggest clients are part of the Boyle gang.

In fact, English’s first client was gang leader Roy Boyle (Simon Russell Beale). English speaks of Mr. Boyle fondly, especially when dealing with Boyle’s son and future gang leader Richie (Dylan O’Brien). Richie is hot-headed, entitled, and prone to self-sabotage. He feels the need to prove himself, especially in the face of his partner, Francis (Johnny Flynn), who seems to hold his father’s affection, despite not being “family.”

The group use the bespokery as a way to communicate with The Outfit, a crime syndicate that formed and spread after the death of Al Capone. The discovery of an FBI bug in the shop (reflecting history where the first bug was placed in a tailor shop) and the possibility of a rat, turn what is usually an ordinary night of cutting fabric and drinking himself to sleep, into a night that will change the course of the life of English and of everyone involved.

When I first heard of the film, I read that it was based on a play and would be shot in a similar style. It was a relatively short shoot from March 2021 to early April. The film is a tight 1 hour and 46 minutes and used wisely by Moore. There is never any lag, only tension and wondering what on earth is going to happen next! Francis at one point says, “If the devil came through the rough, I wouldn’t be surprised,” and he’s not too far off. What sets the reveals apart is they are 100% earned, and you never feel as though the film was taking advantage. It was nearly immersive in the way it allowed you to choose sides and become attached to these characters we’d only known for mere minutes up to this point.

Moore’s direction is extraordinary. Nothing is over the top, not even Richie who is by far the most volatile. O’Brien gives him a “naughty newsie” vibe that works with the type of character we assume Richie to be. He’s strong and brave but also has an inkling of a heart, and it terrifies him. He can’t stand to even imagine he could be the butt of the joke, and his demeanor switches on a dime. Even in a character that could be so far over the top that it becomes camp, O’Brien can reel in baser instincts and hone a character that lives just outside the lines of decency. Mable appears to be a cookie-cutter damsel in distress, but her role is fleshed out, and she provides a few of her own twists that fall into the mix.

The other supporting characters do a serviceable job with a special mention for Nikki Amuka-Bird as Mme Violet La Fountaine. When I originally heard about the film, I balked. How could you tell the story of gangland Chicago without recognizing the Black gangs? Though her part is small, it’s focused and just as hard-hitting. Her glance is just as menacing as any other gangsters trying to get their piece of the pie.

If Moore has a gift for wringing emotion and meaning from the mere lift of an eyebrow or an askance look, then Rylance has a gift for delivering with pristine precision and authenticity. He gives English a type of Downton Abbey reverence when addressing his customers, frequently referring to them as Master. He is diminutive and wants nothing more than to make beautiful, classic suits and be left alone. He’s asked constantly why he moved to Chicago, and he constantly evades the answer. As the narrative unfolds, you’ll see there’s more to the cutter’s dislike than blue jeans. Rylance is quiet, but it makes him no less affecting. It’s a beautiful performance that shines in a film meant to showcase it.

When you think of gangster film legends, you might think of The Untouchables or Goodfellas and what often comes with that is bloody violence, action-packed shootouts, and raging arguments. But just like in life, being a gangster can hold the same stakes in more quiet environments. English’s bespokery is the sole location for the film, and it’s this theatrical-like setting that allows for intimacy when needed and a feeling of confinement in other moments.

When a car arrives, it’s shone as bright lights cascading through a high window. When clandestine conversations are had, they go to another section of the three-section shop and speak closely and quietly. It has a way of including the audience in the conspiracy while we sort through clues to figure out what’s really going on.

I could find very little fault with the film. There’s something to be said about how to best include any sort of diversity in a film primarily about white men, but I do believe concessions were kept in mind. I especially like that Mable was not just a pretty place setting. She had agency and was her own character.

If anything, I could have settled for a bit more about English’s background. Also, the actual outfit seems pretty inconsequential to this whole thing, but that very well may have been the point. Overall this is a stunning film with very few faults. Even if a gangster movie isn’t your typical genre, this movie will still delight and entertain you. Keep in mind, it is a thriller, and while it offers up a few laughs to break the tension, it’s a quiet film filled with wonderful performances.