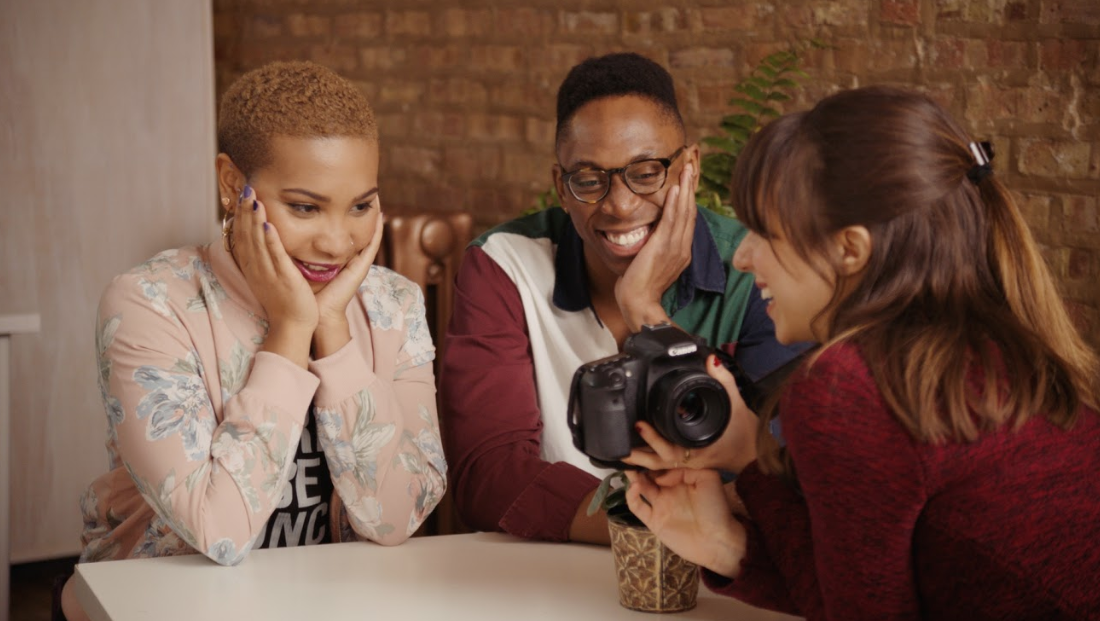 Kyra Jones’s work The Right Swipe takes a hard look at the way many date in our modern society.

Jones is the co-creator, co-writer, and co-executive producer of The Right Swipe. Her business partner is Juli Del Prete, who is also credited with writing, producing, and creating the show. The web series articulates the particular subculture of marginalized identities and sexualities on dating apps.

This series explores the ways in which dating online has become more common. How often is it that in social media, films, and news stories, the only things worth posting are those about conventional beauty, skin shades, sexualities. Often those standards leave out queer people of color. This perpetuated vision of what is common can make viewer believe that there is something wrong with them if they do not perfectly fit those images.

The talented Kyra Jones stars in The Right Swipe as India, with her long-time bestie and comedic friend Julia Del Prete, who plays Margo. India’s new-found lover Elijah is played by Patrick Agada. Margo’s attractive “boyfriend” Danny is played by the oh-so-loveable Sam Douglas. The final piece of this luscious group is Collin Quinn Rice, who plays Eden.

This marvel of a spectacle could not have been accomplished without the help of Sarah Minnie (producer), Sarah Conley (producer), Justin Casselle (director), and Jana McLain (cinematographer). No series can be produced or completed without support and guidance.

Kyra Jones’s vision complicates the basic standard of romantic comedies by being inclusive of all kinds of beauty. Her work is able to appeal to many communities by including individuals who are not considered mainstream. Jones isolates the subculture in the larger society and magnifies it for audiences who might not be as familiar with those communities. She is also putting the spotlight on those cultures in order to be able to make them the beauties of this series. In an interview conducted by email, Jones told us, “We have a character who is a nerdy Black filmmaker, a queer Asian poet, a trans man looking to return to dating apps after transitioning, and more. India and Margo never tell these men to change who they are, but instead how to show off the best parts of themselves.”

The way people date and meet people in our communities has changed. The usual or perhaps outdated axiom, “we met at so and so” has evolved to “we met online.” The Right Swipe reflects with clarity that vision. More queer individuals have met, for the better or worse, through online dating apps, and that trend does not seem to be slowing down anytime soon. It perhaps allows individuals to feel safer in a society that does not often value them. This series is taking into account this change in the rom-com.

This radical, impressive web series has many positive aspects to it, and a few that stand out include its music and its graphics. The music that is produced magically blends in and stands out in ways that effortlessly prompt the theme of humor and romance. The music montage that plays in the background when a stream of guys are being interviewed flows and emphasizes how clueless these guys are when dating. The music selection also helps to emphasize the more sexual aspects of the show without over-sexualizing.

The graphics also help to promote the message and theme of the show. The few rules that are established early on in the episodes are highlighted and emphasized with the help of graphics. These graphics are amusing and help to more clearly define the meaning of the rules. There are even interesting transitions that use graphics. These visual illustrations are colorful and stylish and are placed in the most effective ways. There is no loss in the visuals in this series. The blending of music and graphics together help to give this show an edge over other less creative works.

The Right Swipe might, for some audiences, seem trivial by reducing its content to a mere social push for a more comprehensive understanding of underrepresented voices. However, for those who have a thirst for more representation, this show will deliver a nuanced understanding of dating. This show has the potential to stand out for how it can make marginalized groups of people feel. It can give voice to the voiceless, allowing those to be seen who do not often get to be seen. This show might be able — if given the chance and the opportunity — to encourage us to see ourselves a bit more in the overlooked communities, cultures, and in these characters.

This might feel like a radically different experience to view a show that does not follow what is standard to see from the mainstream media, but this is a new year. This show might even, for some, compel us to connect with not just its humanistic storylines, but its characters as well.

You can catch The Right Swipe here: bit.ly/therightswipeTV