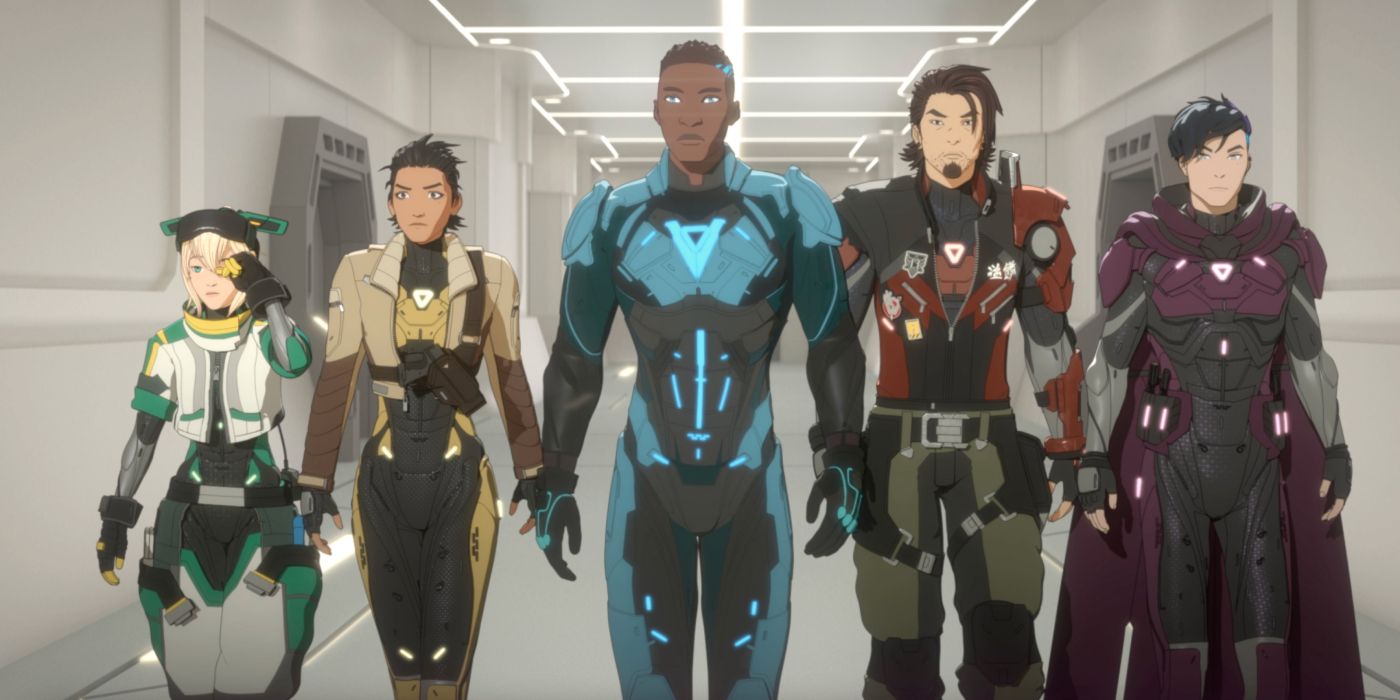 Rooster Teeth’s sci-fi mecha anime, gen:LOCK, returns for its second season on HBO Max. Written and directed by Gray G. Haddock (RWBY), the show’s first season aired back in 2019 on Rooster Teeth’s FIRST platform, as well as Cartoon Network’s Adult Swim. New and established fans are sure to enjoy this second installment.

gen:LOCK is set in 2068, a dystopian future. Two dominant factions that have very different plans for the future are at war — the Polity, which stands for freedom, and the Union, which hopes to create a monoculture. Polity’s military, the Vanguard, responds to an attack by the Union, an event referred to as the Battle of New York.

The first season follows a young Vanguard pilot, Julian Chase. After a terrible accident during the Battle, he is all but dead. Dr. Rufus Weller, head of Polity’s Experimental Science Unit (ESU), saves Julian with gen:LOCK, a technology that allows a person’s consciousness to be digitized. This allows them to power giant mecha called Holons as if it were their own body. Only a select number of people are suitable for the program, and the Polity begins recruitment.

Weller’s recruits include the Iranian combat pilot Yasamin Madrani, the teenage Scottish hacker genius Cammie MacCloud, former Russian special forces Valentina Romanyszyn, and the rebellious Japanese sergeant Kazu Iida. This team led by Julian learns to mindshare, which makes them stronger in battle. However, their memories are transferred to each other, and eventually, they know almost everything their teammates have experienced in their lives.

By the end of the season, the team learns that the Doc kept a backup copy of Julian’s brain while experimenting with the program. The Union got ahold of that copy and corrupted it, creating a sort of evil twin, called Nemesis.

The second season begins with the war against the Union and their Nemesi (copies of Julian’s mind). It seems like a hopeless situation. Some are more optimistic than others, though all the characters know that this war will likely never end. The gen:LOCK team’s purpose is to fight for the future of humanity, or what’s left of it at least.

With Nemesis invading his mind, Julian has an identity crisis. Jordan is tasked with conveying complex emotions using only his voice, and he gives a heartfelt performance. What Julian goes through this season is particularly traumatic. The first season touched on the psychological effects of Julian killing a version of himself, but since then, he’s had to repeatedly face his sinister copies.

The biggest draw to this series is the characters. They’re strong with distinct personalities that don’t feel one-note (with the unfortunate exception of Miranda). Each has their own trauma to deal with on top of beginning their new life as Holon warriors. This season has a lot of flashbacks that offer some insight into their lives before the gen:LOCK program. We also learn what started the war.

While I appreciate the art and storytelling of anime, it’s not a genre I typically watch. I believe that this series could be a great introduction to the world of anime as it draws inspiration from classics like Ghost in the Shell. It’s definitely encouraged me to seek out more films and shows instead of simply writing anime off as something I just haven’t been able to get into so far.

gen:LOCK’s design is very dreamlike. Certain locations are glowier than others, but there’s a consistent cinematic look throughout the series. This season especially has a glitchy aesthetic that sets the tone of uneasiness, frustration, fear, and impending doom. It reminds us (and the characters) how fragile life and technology are in this world, and the side effects of their coexistence.

As someone who isn’t usually into anime or dystopian settings, I was blown away by the first season of gen:LOCK. Its second is as entertaining and compelling as its first. We learn more about the characters, their past traumas, and their growth as a team. The action sequences remain epic and continue to reflect the characters’ personalities as they evolve.

In an interview with Season 2’s writers, Maasai Singleton told RTX, “The way we wrote Season 2, it’s like we were mind-shared the whole time.” And it shows.

Season 2 of gen:LOCK premiered on HBO Max on November 4.