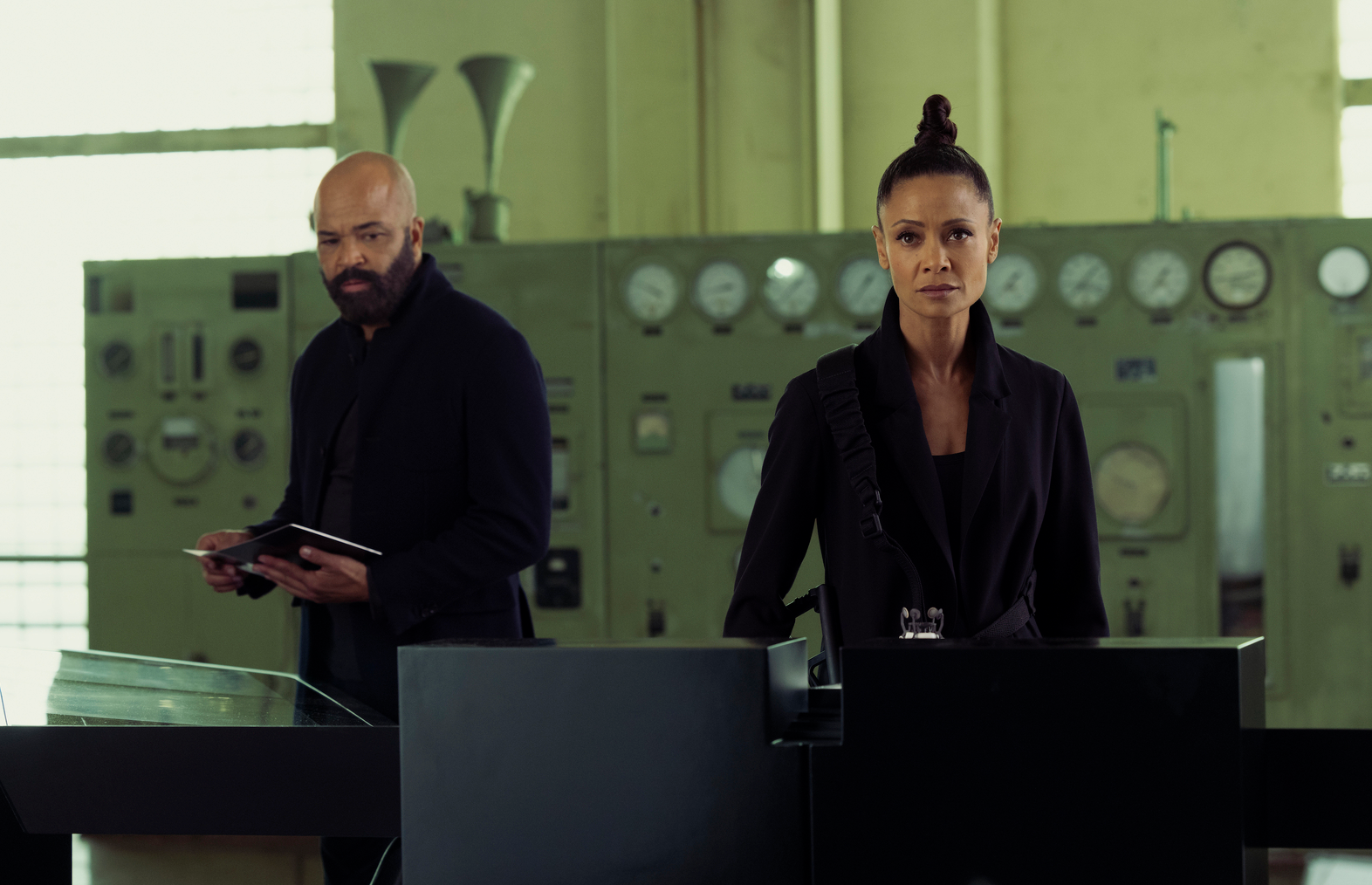 “Have you ever questioned the nature of your reality?”

This query is a narrative thread that has followed Lisa Joy and Jonathan Nolan’s Westworld since its first episode, becoming the central theme of its fourth season as we experience the transition between two competing world orders.

In classic Westworld fashion, these world orders are presented out of sequence, a new maze for viewers to solve. In one iteration, humans restore their reign over self-aware androids as well as the corporate overlords who weaponized AI tech for social control. In the other, robots rule supreme over colonized humans, controlled by nanotech parasites. Which is which? And what is real?

These are the two questions plaguing (pun intended) not just the audience, but also the main players in Westworld’s newest season, some of whom we’ve known for a long time as well as important newcomers who represent the future of humanity.

In order to understand where we’re at in Season 4, we have to go back to the beginning of Westworld’s complicated, time-bending narrative. The first season introduced us to Delos Parks, a theme park for the rich and sadistic where they can act out their most depraved fantasies on humanoid robots called Hosts — that is, until the hosts become self-aware and turn on their makers.

Season 2 follows the Hosts’ new struggles for independence and escape from the monstrous worlds humans have created, while reckoning with all the violence they remember living through for the three decades of Delos Parks’ operations. By Season 3, the Hosts have been liberated, and in the process revolutionary Host leader Dolores (Evan Rachel Wood) has discovered the violence against Hosts was also used as a tool of social control for humans. She seeks to free them too.

Unfortunately by Season 4, Dolores’ self-sacrifice didn’t stop one of her other Host avatars Charlotte Hale (Tessa Thompson’s fabulous turn as an android super-villain) from proceeding with her revenge against humans, subjugating and torturing them in retaliation. It’s a tragic place to end up. But one of Westworld’s core themes has always been about trauma, and specifically post-traumatic stress.

Because they are synthetic beings, the way that Hosts remember is akin to someone with PTSD having a flashback. Flashbacks aren’t just simple memories; they are a full-body remembering of a terrible event. The level of disorientation is so extreme that the flashbacks untether your hold on reality and time itself. Seeing the Hosts go through this again and again is both painful and a powerful on-screen reflection of the difficult-to-describe phenomenon of real-life PTSD flashbacks.

By Westworld’s fourth season, the PTSD narrative deepens, and we witness how different people deal with severe trauma. Some fully repress these memories, like Dolores’ newest iteration Christina. Some perpetually go through every crisis permutation to figure out the best outcomes, like Bernard (Jeffrey Wright). Like William, the degenerate Man-in-Black-turned-Host, some pretend their pasts aren’t as bad as they were. And like Charlotte Hale, some wish for others to experience the same horrors they survived; they will not give themselves the gift of healing and would rather hold on to a victim/survivor identity long after it’s stopped serving them.

For Dolores’ newest version Christina — a blank slate of her old self — her journey to self-awakening mirrors trauma therapy. Like a caterpillar turning into butterfly, you must psychologically dissolve and re-embody in mind and flesh to accept fundamental truths about yourself to at last become an empowered being. “We are reflections of the people who made us,” Teddy Flood (James Marsden) says to Christina. It’s an agonizing and powerful sentiment.

But it’s not just the universal themes of trauma and post-traumatic stress that keep Westworld relevant in its fourth go around. Season 4 features an entire infection and plague narrative that mirrors not just our ongoing real-world Pandemica, but also cleverly introduces a new game park Temperance, set in the roaring 1920s and post-Spanish flu era.

Charlotte Hale uses ProhibitionWorld as the vehicle to release the nanobot parasite that essentially colonizes humans, transforming them into android-adjacent Hosts. With the tables turned on humans, robots can now enact any and all whims on these newly compliant beings, just as humans used to with Hosts.

But there’s a twist: Some humans, called Outliers, are breaking out of their infected state and returning to the consciousness of free will. Worse, Hosts who have contact with these Outliers end up losing their minds and killing themselves as the nature of their own realities becomes clouded beyond resolution.

Charlotte Hale has created a new world for Hosts to escape their human-based forms, but the Hosts seem to rather want to die than join her unique vision for android futures. All the while a small group of uninfected humans continues to fight to restore some semblance of autonomy outside of Charlotte Hale’s control.

The danger of AI becoming self-aware isn’t new, but the manner in which it happens in Westworld’s fourth season is indeed fresh. Ryan Britt of Inverse does a deep dive into the Hosts’ dilemma of the season, writing, “The idea of a humanoid robot grappling with its essential form, and thinking about choosing something else unconnected to the tactile experience of ‘humanity,’ isn’t a clean analogy for anything in real life. This is hardcore science fiction, insofar as the entire premise of the dilemma is doubly speculative.” Yes, metaphors do abound in Westworld 4, but it also takes us way past allegory into territory uncharted on screen until now.

As in previous seasons, Westworld has fantastic, fresh worldbuilding that ultimately comes crashing down to set a foundation for a new iteration to emerge. Season 4’s ending, though, is exponentially more apocalyptic than previous seasons with a massive body count that includes most of the human population. It’s a terrifying commentary on the nature of colonial projects: how they are often violently built over the bones of previous attempts, and rarely for good.

But in this ultimate reset at the end of Season 4, there actually is new hope for more humane worlds, for humans and Hosts alike, that would be explored in Westworld’s fifth and potentially final season if HBO greenlights a renewal. I sincerely hope they do. Westworld is an immersive world that I love spending time in and reflecting on long after an episode or season has aired.

The fact that Westworld has explored all the layers of humanity through the lenses of androids is a brilliant move that deepens with every viewing. The PTSD aspect of the Hosts’ layered memories makes these robots more realistic than most flesh-folks portrayed on screen, allowing for some of the most moving performances of the year, from actors like Evan Rachel Wood, Thandiwe Newton, Aaron Paul, Tessa Thompson,  and the inimitable Jeffrey Wright.

As bleak as many aspects of this season might have been, Westworld closes with a welcome sense of hope that the next worlds emerging from the ashes might finally be ethical and sustainable, putting these violent delights behind us at long last.

All four seasons of Westworld are streaming on HBO and HBO Max.