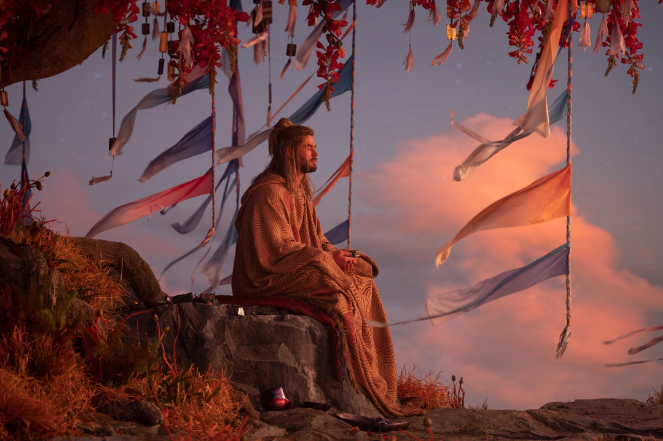 The Thor film franchise takes an interesting approach to the franchise with its latest installment Thor: Love and Thunder. Once again directed by Taika Waititi (Waititi also directed Thor: Ragnarok to great success), the film takes what worked in Ragnarok and pushes it right to the edge. As soon as you think you might find fault with something in the film, something else happens that allows you to rest confidently in Waititi’s embrace.

Naturally, as with other Thor movies, we start with a scene that includes characters we’ve never met and quickly introduces our villain, Gorr the God Butcher (Christian Bale). The film is nestled in the sweet spot right after Avengers: End Game, when Thor (Chris Hemsworth) has teamed up with the Guardians of the Galaxy (or as Thor calls them, the “Asgaardians” of the Galaxy). They’re gallivanting across said galaxy, protecting worlds from collapse with ’80s inspired dance fight sequences. Newly minted right-hand man, Korg (Taika Waititi) plays along and watches Thor Van Damme his way to icon status by saving the world. Sure, he leaves some collateral damage in his wake, but it’s the thought that counts.

Though he feels accomplished in saving worlds, Thor still feels unfulfilled. It’s been years, but he’s still feeling the absence of Jane Foster (Natalie Portman), his former love who left him with a note. He decides to leave the Guardians and embark on a quest to find himself.

I will say, the film started out very silly. It’s truly the one word that is appropriate, and it gave me a bit of pause. But Waititi has a way of being able to balance humor and emotional weight. As a straight man, Chris Hemsworth was able to have fun with Thor’s stoic nature.

Thor’s charm rests in his obliviousness to his own hubris. In the beginning scenes of Love and Thunder, Hemsworth seemed just a tad too “in on the joke.” Thor’s lack of true self-awareness is what makes him endearing — it’s a much needed flaw in an otherwise appealing package. Additionally the tone of the film didn’t wholly seem to match with the slapstick.

That said, once we get into the main thrust of Love and Thunder, all of this gels. Again, a strength of Waititi is to play it all the way to the edge of the cliff, maybe even hang off of it with a pinkie or a fingernail, but when it counts he knows exactly when to pull back and refocus. Thor comes down just a bit, and the levity of the film is elevated just a bit.

It can also be said that Jane Foster acts as a nice balancing rod for the tone. She’s going through some pretty harrowing things, but she’s still got her wits about her while also employing her trademark childlike curiosity to all of the things science can’t explain.

I’ll admit, I was not a fan of Thor and Thor: The Dark World. They were overly serious and honestly, boring. Jane was there, but for me she lacked presence. Portman wasn’t given much and what she was given was akin to someone playing a cop’s wife. There’s no way to not look selfish when all you want is your partner and all your partner wants is to save the world. Love and Thunder gives her a special kind of agency and impact that was sorely missing from the first two films. Her goal isn’t to help Thor, it’s to help herself and to equally work together to help others.

Without spoiling too much, we know that after eight years apart (Thor knows the timeline down to the minute), Thor and Jane are finally reunited, though not under the most desirable circumstances. A new villain has arisen, and he’s in possession of All-Black the Necrosword, which is deemed the God Butcher. Gods across the galaxy are being hunted and killed, leaving the people they protect vulnerable. After the sprawling town of New Asgaard, under the competent rule of King Valkyrie (Tessa Thompson), is attacked and the children are abducted, Thor teams up with some surprising allies to rescue them and defeat the foe. The plan is not without its complications, and watching the team work together to amazing musical choices is a fun and exciting ride. The movie is just under two hours, but the time is used so well you don’t even notice.

At one point our group of heroes go to Olympus to solicit the help of other gods. This scene works wonderfully because while it does show the silliness of the gods, it also expands the universe and creates nearly endless plotlines as we move into the next MCU phase. There’s also an ongoing love triangle, but not between who you would expect. Thor, his original hammer Mijolnir, and the newly gifted Stormbreaker present a very real conundrum for Thor. These moments help to maintain the balance between the comedy and tragedy of the film. Where The Dark World was an overly serious movie about overly silly topics (gods, men in tights, father/son angst), these past two films have made the silliness the focal point and snuck in serious moments, making the emotional elements much more effective and satisfying.

Christian Bale is nothing less than his brilliant self as Gorr. It’s an intense character, and it is a bit all over the place, but Bale commits. Gorr claims to have good intentions, and we know he’s being corrupted by the sword (obvious shades of Wanda and the Dark Hold come to mind), but it’s not always a smooth transition. He doesn’t harm the children, but he has no problem frightening them. This is a bit strange since we learn his love for his daughter is the impetus of his rage. There are some choices that Bale makes that can easily be explained and others that make me wonder if I was missing a scene. Gorr’s motives are pretty straightforward; it’s the execution that’s wildly erratic and necessitates a second viewing to fully appreciate his character — one I would happily endure.

Waititi’s direction is another standout for Love and Thunder. His use of color and music set the theme so well for his vision of the Thor movies that it feels like they should have been this way all along. Where before the tone around the films was staunch and self-important, now there’s a fourth-wall-breaking tonal wink that invites the viewer in. This recognition and respect given to the audience means a certain amount of grace is given for some of the film’s heavy-handedness and minor missteps. After a scene near the end of the film, I exclaimed, “All is forgiven!” and a person near me in the screening agreed. It’s not that Thor can do no wrong, it’s that we expect him to and he’ll get away with it because ultimately the good outweighs any bad.

Of course, stay turned for not one, but two post-credit scenes that you will not want to miss. Thor: Love and Thunder will blast into theaters July 9, 2022.