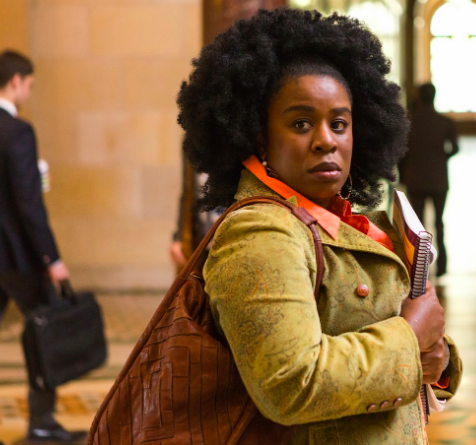 Aduba delivers a message about disadvantaged D.C. youth that must be heard

Orange Is the New Black’s Uzo Aduba delivers a powerful performance in one of her best works yet as she takes on the role of Virginia Walden, single mother to a 15-year old boy named James who begins to lose himself to the inner-city lifestyle of Washington, D.C., street life. As she sees her son fall short of his full potential, Virginia makes the decision to enroll him in private school. This is a decision she soon realizes she cannot afford. With the threat of private school tuition costs, she takes initiative to challenge the system that she feels is set to suppress her son and other disadvantaged youth like him. Unfortunately, change that roots from systematic oppression cannot be undone without obstacles from unjust lawmakers, opposers, and negative forces within Virginia’s own community.

In Miss Virginia, Uzo Aduba tells the real-life story of Virginia Walden Ford, a single mother from a low-income community in Washington, D.C. who struggled to provide for her child. Virginia worked for advocacy and change for her son and other at-risk children. She worked to build a scholarship program to benefit at-risk youth and ultimately lead them to a greater future.

These statistics are significant because viewers see them come to play in the film. Before the character dynamics arise, the audience automatically sees the D.C. living environment. In the film’s opening, the audience sees D.C.’s inner-city homes. Viewers are introduced to the lifestyle. The effect of this allows the audience to understand that the environment in which these children live is what often shapes them into who they are. Although Virginia’s son skips school and misbehaves, his behavior alone is not responsible for his downfall. He already comes from a broken home and disadvantaged lifestyle from the start. These disadvantages are a trajectory to Virginia’s son’s misbehavior, as she feels. These factors are what fuel Virginia to pull her son from his school and enroll him in a private institution.

Similar to what is present in the film Miss Virginia, experts, too, agree that the environment can influence one’s actions. According to research from “The Science of Adolescent Risk-Taking: Workshop Report,” youth who grow up in environments containing economic issues and limited role models are more at risk for factors like poverty, teen pregnancy, and violence. Viewers see these statistics play out in the film when James tackles abuse from his classmates at his public school in an inner-city neighborhood versus the upscale private school in a less urban environment where the education system was tamed.

Uzo Aduba’s performance as Virginia brings Walden’s advocacy to life as we see her character’s emotions shine through while she fights for her son James’s well-being against disbelieving instructors at his school, all the way to the corrupt lawmakers in the District. This raw emotion Aduba has while portraying Virginia shows that Virginia is not only passionate about providing an adequate education for her son but making sure other students in James’s situation do not go through similar obstacles that interrupt their education. Walden’s story speaks for others not only herself. There are many individuals who struggle to escape the systematic lifestyle that runs the current education system.

Miss Virginia gives a voice to the voiceless children who would otherwise remain a part of the system. This five-star film takes an alternate route by addressing an ongoing issue that proves if disadvantaged children did not grow up in the wrong zip code, their lives would not be predetermined by the circumstances of their environment. Children are indeed a product of their environment. Importantly, not all lawmakers create policies with the best interests of children in mind. This film exposes that rationale while revealing the mindset of politicians and how they serve the people. What’s unique about this film is that Virginia is able to rise above those who deemed her powerless, all to carry out her message that “no child should be cut off from education.”