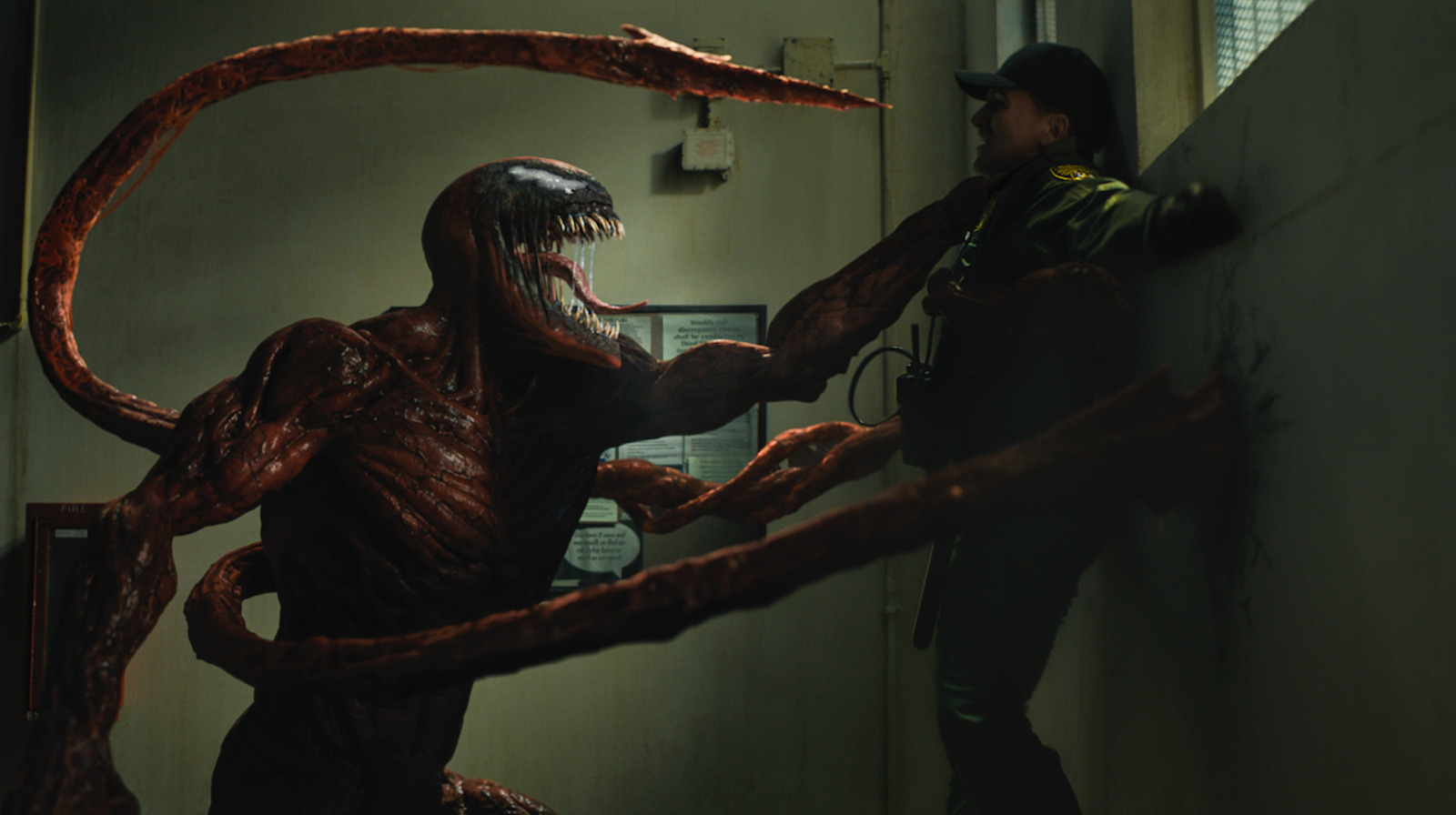 Let There Be Carnage picks up where we left Eddie and his blossoming relationship with Venom. The two bicker back and forth, mostly about Venom’s hunger for human brains. One of Eddie’s established rules is to not eat people, so his symbiote pal must sustain himself on chocolate and live chickens. They’ve clearly got some things to work out.

When Eddie goes to interview the notorious serial killer Cletus Kasady at San Quentin, Venom’s impeccable memory helps Eddie decipher the cryptic drawings all over Kasady’s cell, detailing where victims’ bodies are hidden. This discovery leads to Kasady being sentenced to lethal injection. In their final (official) meeting, Venom lunges at Kasady after Kasady taunts Eddie about his failures. The killer bites Eddie’s hand in retaliation, getting a taste of his unusual blood. Now Kasady has his own symbiote — Carnage.

Cletus Kasady is a compelling villain because he’s not some otherworldly being (at first) — he’s just a serial killer. The film opens with a haunting piano score and a flashback to young Kasady at St. Estes Reform School — a quick peek into his origins that will be fleshed out later. This is mostly to establish his strong bond with Frances, who is taken away to Ravencroft Institution. Kasady is sort of like Marvel’s Joker in that he loves chaos and violence. Unlike the clown though, he does show real emotion when it comes to his long-lost love Frances (aka Shriek). He also has an obsession with Eddie, though it isn’t completely clear why.

As shown in this clip released ahead of the premiere, the “birth” of Carnage during Kasady’s execution really leans into horror territory. Carnage’s sinewy, fiendish, blood-red design ensures the psychotic symbiote stands out in comparison to Venom. In the first film, Riot had abilities that made him a formidable foe, but Carnage is on another level. His several spikey limbs easily rack up casualties everywhere it goes.

Kasady’s girl Shriek is all about his new look and abilities. She, too, craves revenge after enduring a life of abuse and institutionalization. Unfortunately, there’s no backstory outside of the glimpse of her at the reform school. We learn Kasady’s dark origins via the postcard he sends Eddie, detailing his violent childhood through crude drawings. Given the tight 90-minute runtime, it’s not surprising details of Shriek’s life pre-Kasady are missing, but it’s still disappointing. Shriek can manipulate sound energy by way of catastrophic, high-pitched wails. And if you’re wondering how Carnage, a symbiote very sensitive to sound, handles Shriek’s super-sonic scream, the answer is…not well.

The only love story that rivals Carnage and Shriek is Eddie and Venom. The codependence between them is comical, and honestly, rather sweet. In the trailer, Anne’s new guy Dan comments that the unstable duo need couples therapy. That’s a lot of what Let There Be Carnage is about for them — finding a balance and maintaining a “we” identity. Venom gets the best lines in the film. It’s always ready to comment whether it’s the awkwardness of talking to Anne about her engagement to Dan or Kasady’s mental instability.

Tom Hardy’s dedication to the role (or roles since he also voices Venom) and the story is evident in his performance and involvement in writing the screenplay with longtime collaborator Marcel. It makes a film more effective when the star really cares about their character and contributes to the story, a la Ryan Reynolds with Deadpool and Margot Robbie with Harley Quinn.

Venom: Let There Be Carnage is a satisfying sequel to its 2018 predecessor. Carnage and Shriek are welcome additions to the franchise, though Shriek definitely deserved more screen time. The sleek visuals and amped up action sequences are the film’s strongest elements. It pushes PG-13 to its limits, but there’s no denying that an R-rating would give it that extra oomph. If you didn’t like the first Venom, then this probably isn’t for you. But if you did, you’ll love Serkis’ chaotic sequel.