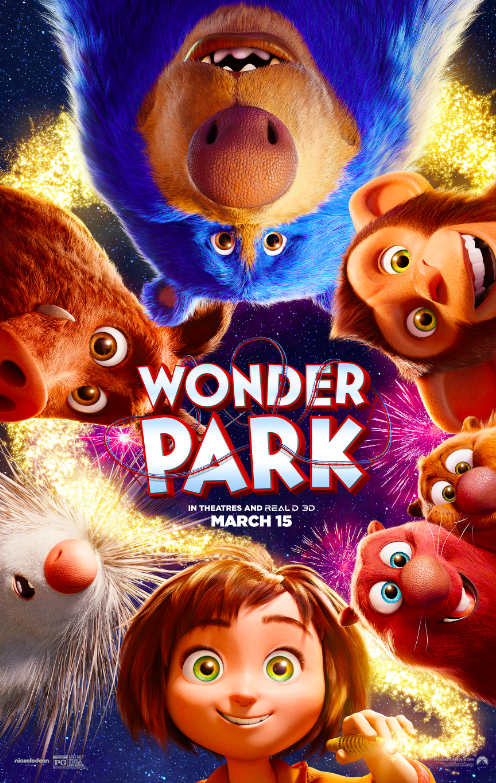 Paramount’s Wonder Park, is a fun animated film filled with creative wonder, adventure and many feel-good moments. Directed by David Feiss, Wonder Park tells the story of a really interesting kid, June (voiced by Brianna Denski) better known as ‘Junebug’ by her closest family and friends. June has a vivid imagination. While June is misunderstood by most, she’s unapologetically creative. With her mom, (voiced by Jennifer Garner), as her biggest fan, June allows her imagination to go wild. June’s mom inspires her to let her imagination run free and wild. It is June’s mom who encourages her to cultivate and sculpt in her mind vivid, talking animals and lively creatures in a place called Wonderland. As a result, 10-year old June has imagined a fantastical place that she spends her days constructing and designing in her bedroom and all throughout the entire house.

June is a wonder in her neighborhood amongst her friends and peers due to her vivid imagination, fun ideas, and experiments. Until one day her mom is diagnosed with a very unique life-threatening illness and has to go far away and receive treatment from medical specialists. Her mom’s absence proves too much to bear for June. In grief, she slowly begins to retreat from using her imagination and building Wonderland. Her vivacious persona begins to dull and her bright light slowly becomes dim.

One fateful day on her way to Math summer camp, June escapes the school bus and happens upon a real-life Wonderland. After further discovery and inspection, it becomes quite evident to June that the very Wonderland that she has discovered is the very place that she has literally imagined in her own mind. June soon sets out and discovers that dark times and having a painful experience does not mean that you have to dim your light. Once June is able to prove that she is, in fact, the creator and has a blueprint for Wonderland, her and her newfound talking animal friends embark on a quest to save Wonderland from dark forces and Chimpanzombies before it’s too late.

A Discerning Parent Who Does Not Limit Her Child

Wonder Park has many inspirational themes within the storyline for both adults and kids. From a parenting perspective, I appreciated how June’s mom did not suppress her daughter’s unique personality, creativity streak and innate desire to build and create things. Even if it meant that these creations would trickle from the bedroom all throughout the house. At the start of the film, June has rallied all of the neighborhood kids in to take part in her creation of a rock/roller coaster that glides through the neighborhood. They rally behind June because she is so full of creative power and tenacity that her fabulous ideas make their world even larger too. While her invention works, she destroys the neighborhood in the process. In the aftermath of the destruction, her own dad (voiced by Matthew Broderick) calls her “a lunatic of a kid”. It is her mom who encourages her to keep imaging fun and fantastical things despite her daughter’s quirkiness.

Representation For Girls Who Build & Girls Who Code

June is a builder. She doesn’t mind getting her hands dirty, experimenting and creating new things. She has a unique way of thinking. This is one of her greatest assets. Seeing her tinker away at creating Wonderland is a great form of inspiration for girls who love to build things and girls who code. As she and her furry friends fight to save the real-life Wonder Park, June’s prowess at understanding advanced scientific formulas is evident. Her ability to bring life and light back to Wonder Park using her intelligence showcases a beautiful visual for future engineers, architects, and scientists.

The Power of the Imagination, Creativity and Shining Your Light

When June discovers Wonder Park in the woods, she comes to learn that her choice to burn the blueprint of this fantastical place in a fire back home, actually created darkness in the real, life Wonder park. After a series of events, she comes to embrace the notion that she has the power to bring light back to what she created. She learns the life lesson that challenging times are meant to be overcome. Her mom’s illness is not an easy reality to accept. However, she chooses not to allow her inner light to dim. June and her friends fight to resist the darkness.

Overall, Wonder Park is a fun, kid-friendly animated film that will resonate well with younger audiences. This animated film is full of adventure. Through June we witness the power of the imagination. It becomes evident that if you can truly imagine a thing, it may very well become your reality.