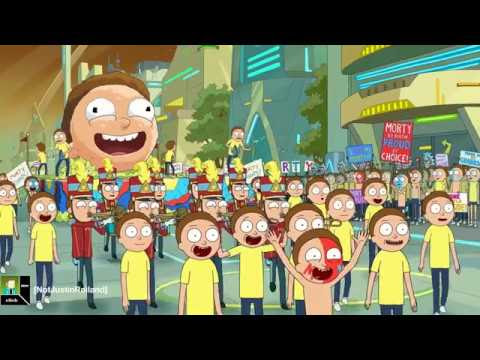 Wow. I mean, how do I even begin to describe this episode of Rick and Morty.

It starts with Rick and Morty excitedly preparing for a trip to Atlantis. They get interrupted by a Rick and Morty from another dimension, who are looking for donations to help rebuild the Citadel of Ricks. Yes, the exact Citadel our Rick and Morty destroyed in the first episode of this season. Rick makes that clear to the other Rick and tells him to skip his ass up outta there, which they finally do.

Morty wonders aloud what life must be like for the Ricks and Mortys still living in the Citadel; Rick says he doesn’t care and they rush off to Atlantis to have fun with the mermaids. But we as the audience don’t follow them; instead, we get to see “Rick and Morty’s Tales From The Citadel” (as the title card puts it) and the whole episode focuses on the interlocking stories of Ricks and Mortys living their day to day lives in that dimension.

As the audience, we’ve been duped. And had this been done badly (South Park’s season two opener comes to mind) it would have been an irritating waste of time. But here, it’s absolutely worth it, if for nothing else just to see what an entire city of just Ricks and Mortys would look like.

And for the record, it’s fascinating, even if the metaphors don’t quite work, like Cop Morty and Cop Rick investigating Mortys on the bad side of town called “Mortytown.” It’s where the Mortys who aren’t good enough to have a Rick live. Cop Morty harasses them, tries to run over a Morty just for saying “Mortys are human,” and regularly refers to them as animals, much to Cop Rick’s growing discomfort. That storyline’s obviously a Training Day parody, but also appears to be a statement on race relations and police brutality, which…doesn’t quite work, for various reasons. (I love the fact that creators Dan Harmon and Justin Roiland tried, but maybe trust actual black writers/creators to write those stories?)

But all the other storylines run much more smoothly, especially Politician Morty’s run for President, and Factory Rick making Simple Rick’s wafers. And everything ties together (albeit very uncomfortably) at the end.

Overall, this was a spectacular episode. The events that occurred could be just a one-off fan service thing—Rick and Morty don’t really have need to be around the Citadel so it’s not like they’ll be running into these characters anytime soon. Still, it’s guaranteed at least one of these characters is going to come back to us in a pretty big way and I can’t wait to see that happen.