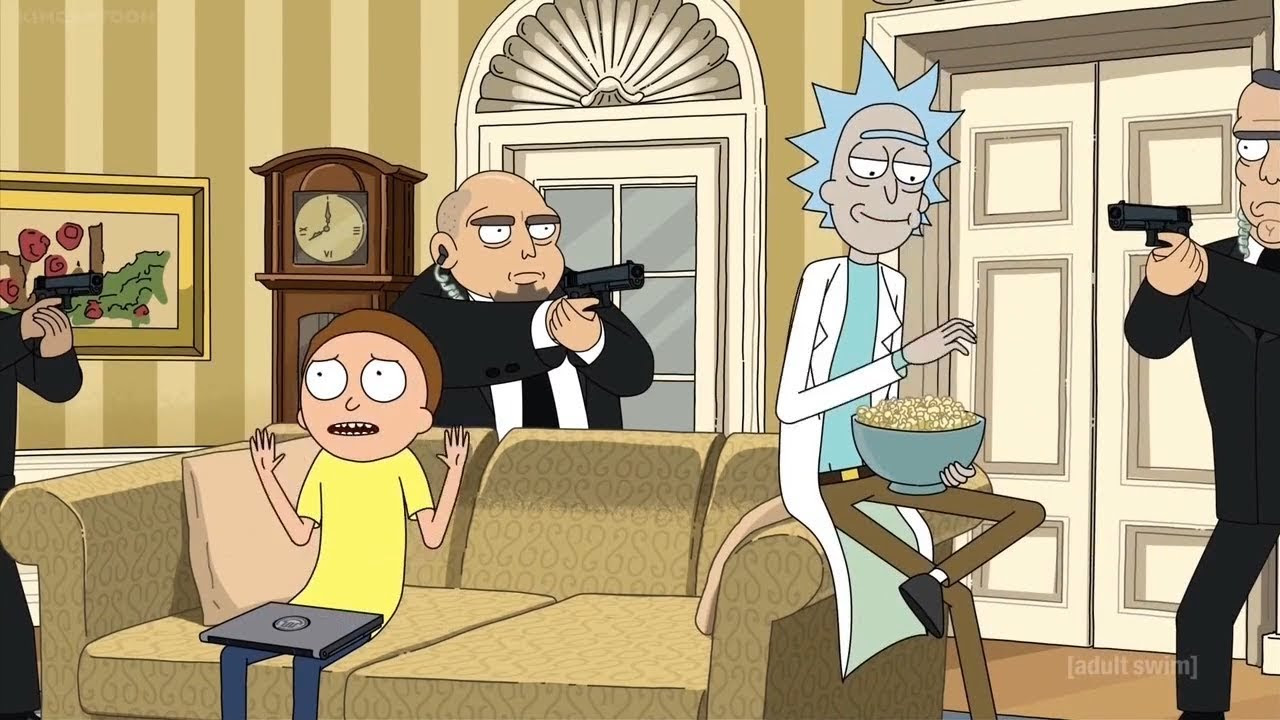 Hmm. I’m not sure how I feel about the season three finale of Rick and Morty.

The episode starts off with the discovery of a monster in the White House. Rick is watching Morty play Minecraft and making fun of him for it, as per usual, when the Secret Service shows up at their door telling them the President requires their presence and all that. At the White House, the President explains that there’s some alien monster loose in the “Kennedy Sex Tunnels” and he wants it taken care of, denies Morty’s selfie request, then leaves.

Rick and Morty head into the tunnels and take down the monster in like two seconds, but then start complaining about the whole situation, Rick noting that the Prez treats them like Ghostbusters. Morty suggests talking to the Prez, but as Rick puts it, “yeah let’s set some boundaries with a spoiled control freak who thinks he runs the world.” Sounds awfully familiar…

They decide to just chill at home and not tell the Prez they’re done for like a month so he’ll leave them alone, but they don’t realize the President has cameras everywhere and he’s seen the whole conversation. He’s even able to watch them at home via satellite, something he lets them know when he calls them to chew them out. They get into an argument and Rick basically tells him he needs Rick and Morty more than they need him and to not push it or he’ll regret it. The Prez doesn’t take this well, and this begins an epic dick measuring contest between Rick and the Prez that just gets more and more absurd.

In the meantime, Beth and Summer go shopping. Summer’s happy about Beth’s new relaxed take on the skimpy clothes Summer wants to buy, saying, “It’s great, it’s like you’re a different person!” Beth finds this alarming. She calls Rick and brings up the offer he made in the previous episode. See, in that episode, he had offered to build her a clone that would take care of the family so she could Eat Pray Love her way through the universe, a happy clone that would take care of everyone and then just be disassembled when she decided to come back. Beth now asks Rick, “Am I that clone?” He says she isn’t. She brings up that if she were the clone he wouldn’t tell her, which he doesn’t deny. He just says that her being happy doesn’t necessarily mean she’s a different person. She agrees with him, which makes him ask her if she’s just saying that because she’s convinced she’s a clone and she doesn’t want him to know that because she thinks if he thinks she’s self-aware he’s going to terminate her. She hangs up and starts screaming.

(I found this storyline actually more interesting than Rick/Prez trying to out alpha each other, because, just like with the best Rick and Morty episodes, I couldn’t tell which direction the show was going to go with this plotline. Is she actually a clone that eventually learns to love and be loved by the family? Is she actually Beth who will slowly go insane until she finds a definitive answer? The writers could make either one work.)

Back to the episode — she can’t figure it out on her own, so she goes to visit Jerry. She tells him what happened and asks for his help — she says he knows her better than anyone else, even Rick, so if she was a clone, he’d know. He reminisces about the date that led to their first kiss, then kisses her, telling her she’s the real thing. And she says she must actually be a clone because she remembers hating that night, but loves watching him talk about it, and that she’s lucky to have a man love her as much as Jerry does. She and Jerry jump into each other’s arms.

Rick and the Prez’s dick measuring contest escalates to the point where they’re trying to kill each other in the Oval Office, destroying White House property while doing so, until Rick finally overpowers him and demands he give Morty the selfie he asked for earlier. Prez concedes, except Morty’s disappeared. He’s sick of the aforementioned dick measuring, demands to know why Rick told Beth she was a clone, and lets Rick know that Beth and Jerry have decided to get back together and they’re now hiding from Rick so he doesn’t kill the Beth clone.

Rick lets the Prez win the fight and finds the family anyway, finally putting the Beth matter to rest once and for all (“Beth you crazy bitch, YOU’RE NOT A CLONE”). But Beth and Jerry are back together regardless, and Rick is finally resigned to the fact that he can’t make everyone do what he wants. He’s not God, and he doesn’t want to be like the idiotically stubborn Prez, willing to let the literal walls crumble around him just to prove a point. At some point, you have to step down and admit you can’t always have your way, and that happens to Rick here.

So as far as a season finale goes, there’s good and bad here. Rick gets to lose a battle, which is always good for him and the show. (We don’t want this character as Mary Sue’d as House ended up becoming.) But…Jerry and Beth back together? Really? After all the growth that happened on both their ends? I’m worried that that will have all been for nothing.

Review: ‘Rick and Morty’ Season Six May Be One of Its Best