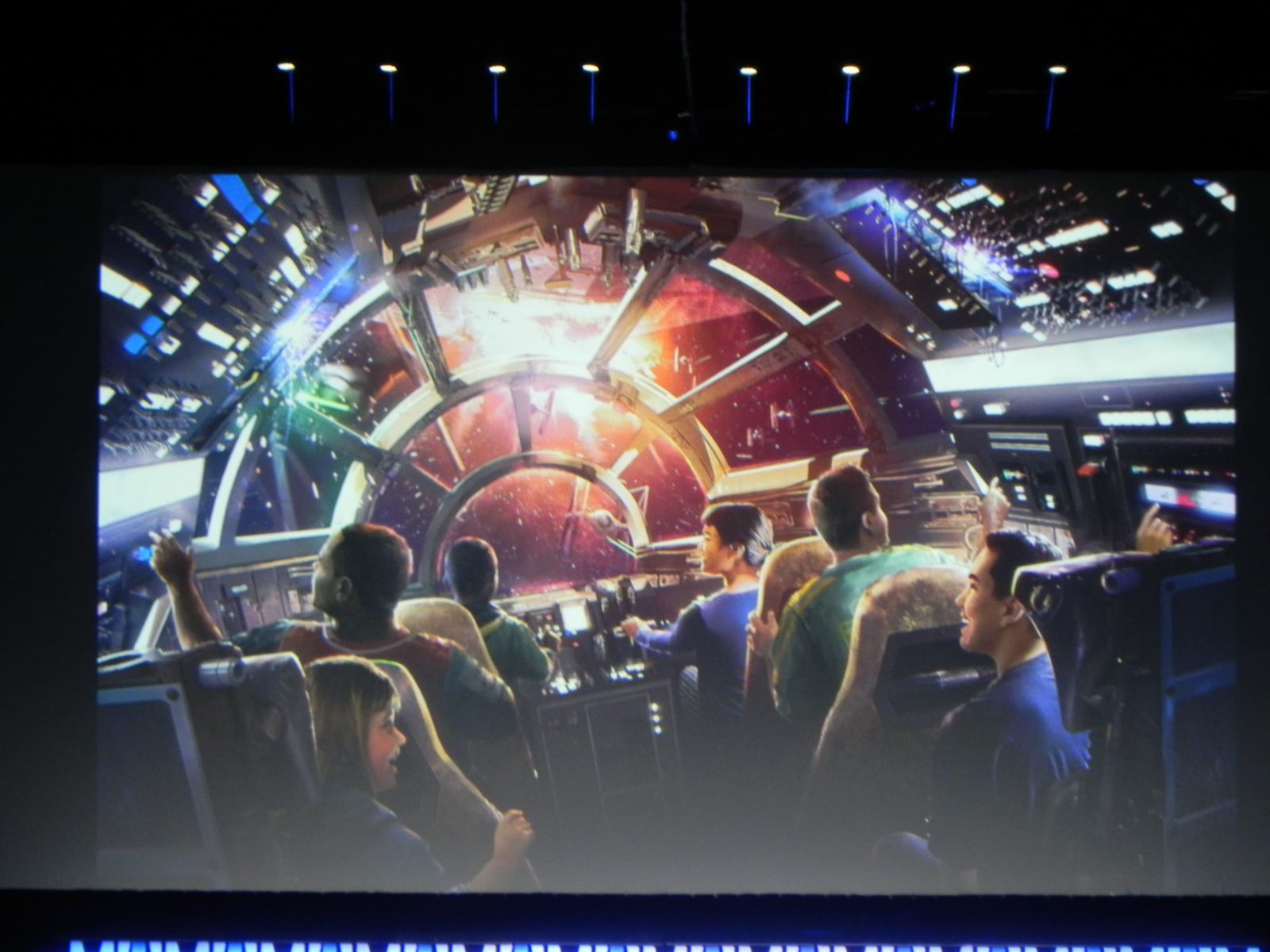 The Star Wars Celebration kicked off Saturday, April 13, 2019, with another huge reveal.

Lucasfilm, in conjunction with Disney Parks, unveiled the complete plans and dates for the new Star Wars Galaxy’s Edge addition to Disneyworld and Disneyland parks. They followed that with reveals of the anticipated game Star Wars Jedi Fallen Order. Throughout the day, we observed so many great cosplay costumes that the Star Wars Celebration Cosplay Competition was a bit lackluster. There were some highlights worth mentioning, however. Here’s a rundown of the main events with a few additional bits of information that we picked up at the Star Wars Celebration. 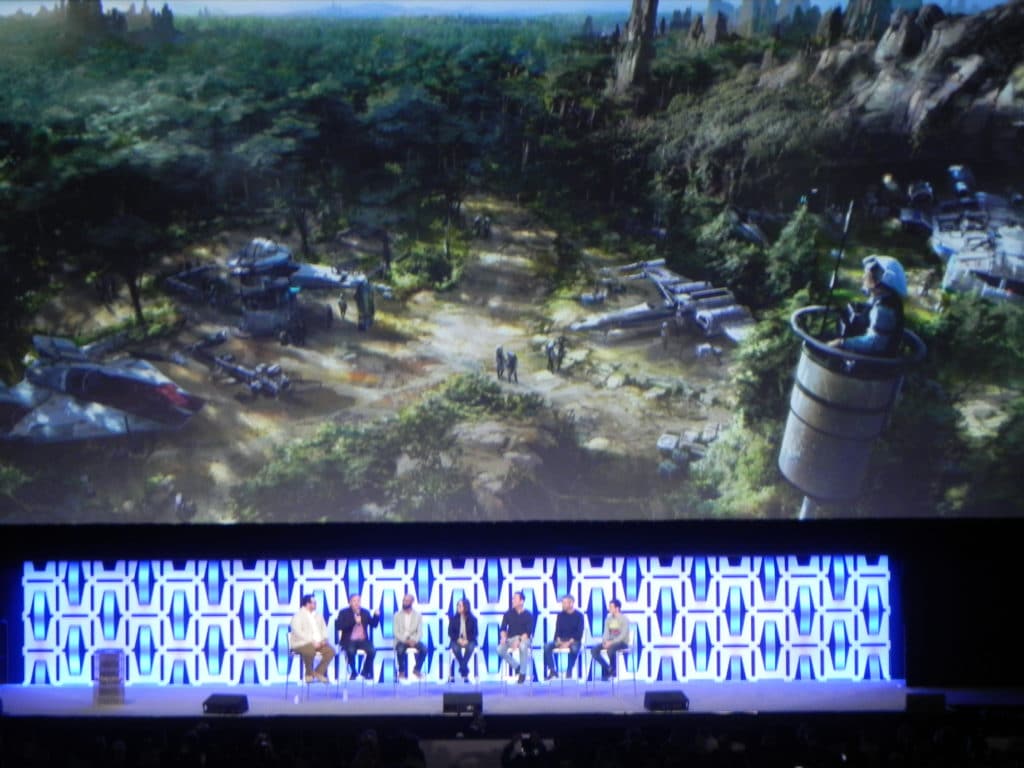 Ready to Be A Part of the Star Worlds World?

Host Josh Gad took the audience on a hilarious reveal of the new additions to Disney’s theme parks. Gad had the help of Scott Trowbridge, (ready for his title, take a breath) Portfolio Creative Executive for Walt Disney Imagineering, the design and production division for Walt Disney Parks, Experiences and Consumer Products; a division of the Walt Disney Company. They announced that the parks would be based on the Star Wars stories that fans loved and they would include some of the sights and sounds that we all love and remember from the Star Wars world. However, these known elements would be merged into a new planet named Bantu and will take place on an outpost called Black Spire.

So, on Millennium Falcon Smuggler’s Run, you and your friends will man and fly the Millennium Falcon as it comes under attack by Stormtroopers. Someone gets to be Captain, and Engineer, along with other duties. At Oga’s Cantina, you can hear new music by the Cantina Band and DJ RX-24 (known as Rex). They have even brought new foods to try, (Gad joked about “space meats”) that have a Middle Eastern spin on them. You can also get BLUE MILK, and green milk too. The Coca Cola company has replaced Pepsi as the official beverage of Star Wars with newly designed bottles made just for the parks.

Coming soon to a galaxy near you: specially designed @CocaColaCo bottles will be available exclusively at @StarWars: #GalaxysEdge beginning May 31 @Disneyland and August 29 @WaltDisneyWorld! https://t.co/tGGrNbpnCg pic.twitter.com/PARP1JYyl2

Black Spire Outpost is where guests at the park can explore the swag in a market that is just like the ones we see in the stories. The outpost will be full of Easter Eggs for fans to seek out while they wait. The most anticipated shop, however, is a custom lightsaber shop where you can build your own lightsaber.

One of the most immersive parts of the park is the First Order and the Resistance Rides. You can choose which side to be on and will get to join the fight as a member of the team. Throughout this ride and the entire park, there will be places with you can interact and surprise voices of the original beloved characters like Hondo Ohnako, RX-24, Nien Nunb, and a surprise reveal — Yoda voiced by Frank Oz. The Disneyland Park version of Galaxy’s Edge in California is slated to open May 31, while the Disneyworld version in Florida will open August 29.

Get Your Game On, Jedi’s

Star Wars gamer fans found the latest information from EA Games and Respawn on a new game due out in fall. Star Wars Jedi: Fallen Order is a new action adventure game featuring the voice of Cameron Monaghan as Cal Kestis. Cal is a Jedi who has survived the slaughter of everyone with that magical set of abilities. This third person game that follows Cal as he masters his powers, including the use of a lightsaber. He must also stay away from the Inquisitors who are out to eliminate the Jedi wherever they may be.

A single player, story-driven title in the Star Wars universe was exactly what we were looking for, and we know the fans have been eager for one, as well,” said Steve Blank, Director, Franchise Content & Strategy, Lucasfilm Story Group. “Focusing on Cal stepping back into the shoes of a Jedi post Order 66 opens up a lot of gameplay opportunities and rich story threads to develop for this new character and his backstory.”

Star Wars fans are the most serious about their cosplay. Just walk the Exhibit Hall floor and you will see all of the artistry, skill, and love of the fandom that goes into every costume. Some were intricately sewn like the Elizabethan Padme, and others are a mashup of imagination like this Stormtrooper from The Whiz.

Star Wars fans showed how they can combine their favorite cultural components to create the perfect costume as well. Check out This Jedi Prince or this combination of a Chinese Dragon with an AT-AT Walker. There were so many different variations that I never did see some versions of Stormtroopers that were based on Marvel characters. I have to say that of what I did see, the Disney Princess mashups were the best. My favorite is this Darth Maleficent.

All in all, the second day at the Star Wars Celebration was a full one that tired out this writer long before dusk. You can see more pics and get more news from the weekend on the Star Wars Twitter page.

Disney+ ‘The Mandalorian’ Unveils New Photo Stills from the Series!