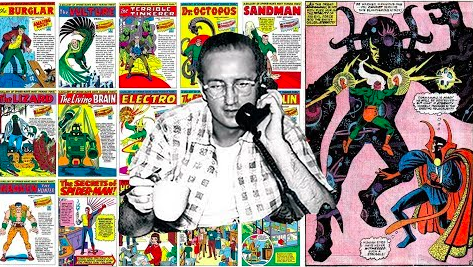 Today it was announced that the legendary comic book co-creator of characters such as Spider-Man and Doctor Strange — Steve Ditko has passed at the age of 90. It was reported that he passed away in his apartment in late June, but only today was it made public.

Ditko studied under Batman artist Jerry Robinson at the Cartoonist and Illustrators School in New York City and in the 1950s he began his professional career as a comic book artist working alongside legendary creators like Jack Kirby.

He’s also created works such as Squirrel Girl, Mr. A, Captain Atom and the villainous character Mysterio. An announcement was made late May that actor Jake Gyllenhaal will play the master hypnotist and magician who is an arch-enemy of Spider-Man.

Steve Ditko was true to his own ideals. He saw things his own way, and he gave us ways of seeing that were unique. Often copied. Never equalled. I know I’m a different person because he was in the world. pic.twitter.com/2GFSA86Btj

Ditko has received an outpouring of comments on Twitter from Paul Dini, Edgar Wright, Scott Derrickson and Neil Gaiman.

His legacy will last forever in the history of comics.