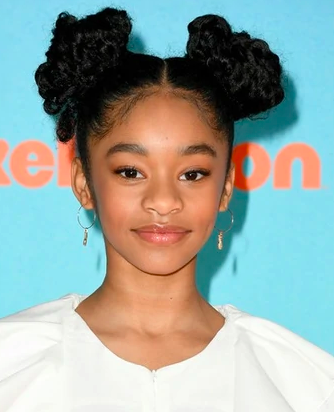 Actress, model, dancer, and now superhero, Akira Akbar is a fresh new face making her mark in the industry. Being a performer is not new to Akbar. She’s held an interest in entertainment since early childhood, and her perseverance is paying off. Get ready to catch Akira Akbar star alongside actors Priyanka Chopra and Christian Slater in the Netflix action-comedy We Can Be Heroes.

We Can Be Heroes, which is Akbar’s second feature film role, is centered around children of superheroes who are taken away to a government safe house as alien invaders kidnap their parents, who happen to be the superheroes on Earth. In an effort to save their parents from the aliens, the children must team up, discover the strengths beneath their powers, train, and rely on one another to outsmart the invaders. Akbar plays the character Fast Forward, who is the daughter of Crimson Legend (played by J. Quinton Johnson) and Red Lightning Fury (played by Brittany Perry-Russell), and the sister of Rewind (played by actor Isaiah Russell-Bailey). Similar to her brother Rewind, Fast Forward has the ability to manipulate time by a few seconds. Fast Forward expedites time while Rewind reverses time by a few seconds. Both skills prove to be beneficial when conjoining powers at the end of the film.

Akbar is no stranger to making television and movie appearances. She’s had roles in Grey’s Anatomy, This Is Us, and Criminal Minds. So naturally working on a superhero film with action and adventure was another positive experience for the young star.

What was your experience like working on your second feature film role in We Can Be Heroes, especially a superhero movie that was filled with so much action?

It was so amazing. I love doing that. Also, being able to train and do my own stunts is super fun. It was just amazing, the whole experience.

What was your favorite part about playing Fast Forward in We Can Be Heroes?

Definitely working with everyone. Being on set for three months is really hard. Working with a bunch of kids is amazing, they make it so much more fun.

You’ve made appearances in a number of notable works like Captain Marvel, This Is Us, and Netflix’s Family Reunion. What were some of your favorite projects to be a part of?

I mean, all of them. They’re such different roles, I can’t really choose which one I really loved. I loved every single little perspective out of each and every character I played. That’s the best part about acting — being able to play different characters. The fact that I did play very different characters is so amazing.

You got into the entertainment industry at a young age. Can you talk a little bit about how you got your start?

My mom used to own a hair salon, and I would always perform in front of her shop. I would dance and find scripts off the internet and try to read them with her clients. She had this one client who saw me and suggested that I audition for commercials and television. So I did and booked my first audition: Criminal Minds.

Do you have any advice for any kids who also want to get into acting?

Yes actually. Don’t let anyone bring you down and keep going for your dreams because even though you’re not at what you want to be at right now, you will be later.

What other types of movies or TV shows do you hope to do in the future?

I’d really want to do a horror film. I just love watching them so much that I think it would be pretty cool to be in one. That’s what I want to be in right now, so I’m hoping I can do one of those.

Are there any talents you hope to showcase or learn for any future acting roles?

How is life outside of acting? Is it easy being able to balance school and finding time to have fun?

Well, you know COVID has slowed a lot of things down so it’s kind of easy to do some things. We are working again, so I’m trying to get my homework out of the way and then I do acting. If I don’t, then I do some homework on set because they do make you do three hours of homework on set. It’s pretty easy juggling school and acting at the same time. On the weekends I hang out with my cousins. I have fun while I have time off.

We Can Be Heroes is available now for streaming on Netflix.