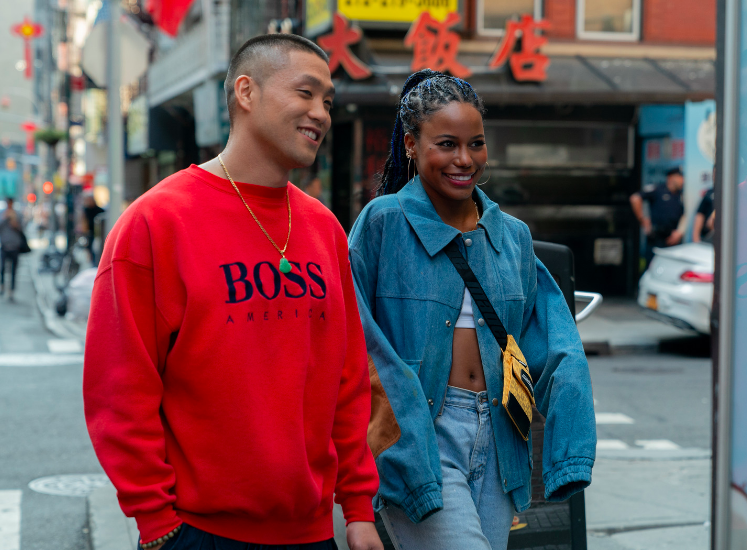 With spring just around the corner, it’s the perfect time to get lost in a story of young love. With New York City as the backdrop, Boogie is a great escape for anyone who is feeling those stay-at-home blues. BGN had an enlightening conversation with the film’s female lead Taylour Paige.

What attracted you to playing Eleanor?

Well at first I was actually like, “No, guys, a high schooler? I’m trying to step into my woman!” [Laughs.] I’d had an audition for something else and didn’t get that role, but the casting director sent my tape forward to Eddie and they just offered me the role. It feels good as an actor when you get offered a role. I’d just finished Ma Rainey and had just a few days to decide. I said yes and had two days before we started shooting to prepare. I love that Eleanor is written to be strong, assertive, and self-possessed. She has self-worth and doesn’t take any s**t. I wish I was that way at 17 years old, you know?

She’s pretty impressive. Was her strength the quality that attracted you most to embodying her?

Yeah, also that she’s fiercely protective, but cares deeply. I loved her fashion sense. I thought it was just a cool take on the love interest. I also dream of living in New York.

Eddie Huang wrote and directed this film, which is inspired by his growing up in Queens. What was the best part about working with a director who also wrote the script?

That’s always a blessing because they know what they want. They’ve written the script, taken time to rewrite and edit. It’s nice to get the truth of the story from the source. The motif here is cultural empathy, and I think it’s really cool to have worked with someone who lives a really colorful life. So I was just excited to work, just another color in the box. I love working with people who care about the work.

I’m a New Yorker. I love Queens, and it was so refreshing seeing authentic portrayal of Queens on screen. What was shooting in New York City like for you?

A dream! I love New York City. I’ve never gotten over the fact that I was always supposed to go to New York. I’d looked at colleges in New York, and just last minute, I didn’t end up going. I always knew that I would get there, but it was a dream. I’d just hope and try my best. Then this opportunity came! I respect New York. It’s just the best. If you grow up in New York, it’s like it’s own kind of college in my opinion. I felt very happy to be there, truly grateful.

Eleanor is such a great person. She’s focused, she knows who she is and what she wants. Why does she believe in a guy like Boogie?

She saw Boogie. She saw his potential, she saw his pain and loneliness and how he was sabotaging his gifts. Even when she says, “I want you to fight for yourself as much as you fight for being Chinese,” she’s saying, “I want you to fight for your spirit and your magic that’s all your own, that isn’t predicated on the pressure of generational B.S.” You know? Overall, you are a soul that needs to revel in your gifts. They both needed one another. I think about how necessary it is to have good relationships with people who see you and believe in you, listen to you and call you out, that young. Because Eleanor does that, then Boogie, feels that there’s possibility for a good life, for it to be different from what his parents have.

Do you see any parallels between the relationship that Boogie’s parents have and the budding love that Boogie and Eleanor are cultivating?

Boogie definitely didn’t trust women because his mom just wasn’t soft and put a lot of pressure on him. So he just wasn’t as available to the good intentions of Eleanor. She was like, “I just like you and wanna be there for you.” And he wouldn’t even let her in, so it was really hard for her. He would tell her a little bit, but she didn’t really know about anything. Which is what boys, men, they can do sometimes. Boogie put this armor up, and Elenor spent so much of her time trying to chip away at it. It’s just exhausting.

I really loved the love story in this film. A few years ago, OkCupid had some depressing statistics about the dating discrimination that Black women and Asian men face. It was so refreshing to see a Black girl and an Asian boy falling in love and living their lives. What impact do you think this film will have on young women like Eleanor?

Hopefully, just to remember you’re not alone. Being alive and being a kid especially now is hard. I hope they take away to just have compassion because you really don’t know what people are going through. You really don’t know what kind of shoes someone is wearing. If only we could be more compassionate. But also, it sounds very cheesy, but all of our differences are what makes this world a more interesting place. We didn’t come here to be homogenous; we came to experience variety and learn from one another. I hope that kids will feel more and more safe to be who they are and check in with themselves and take moments to discover how they want to live their lives on their own terms.

What aspects of this character gave you joy?

So much! I loved being challenged to just sit in the role and not make being in New York a “thing.” I also just loved how relaxed Eleanor was — her self-possession and strength. I loved the challenge of bringing my self-awareness at my age as I portrayed a teenager who had her own level of self-awareness and confidence at her age blending experience from my life, where I’ve come from, and how far I’ve come in my divine feminine presence. Yeah. I just enjoyed the understanding and spirit of the story. Being in New York and taking in the energy of New York, doing another movie, you know all of that, brought me joy.

Taylour Paige Wasn’t Down with the Original ‘Zola’ Script