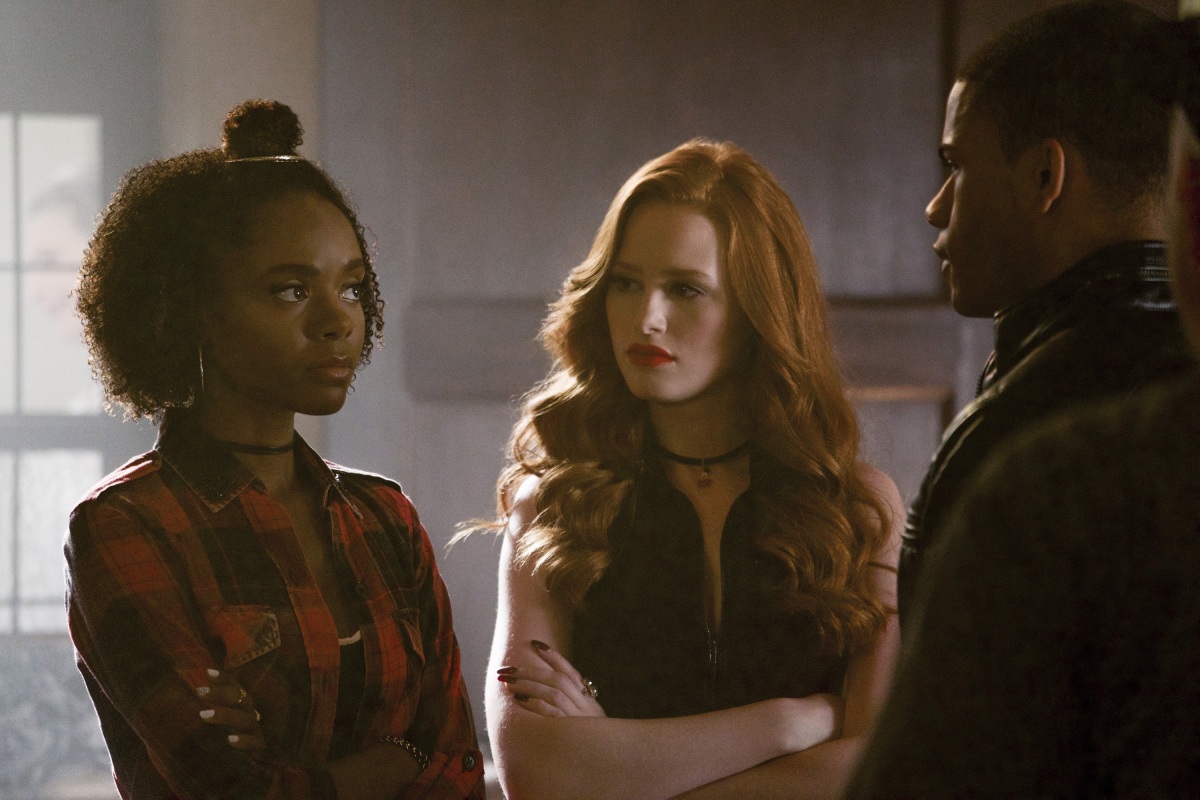 It’s official: self-preservation is not a priority in Riverdale. Surely, these people don’t want to be murdered, but they sure seem to be asking for it. This week’s episode, “Takes from the Darkside”, opens with a challenge: if Riverdale’s residents can go sin-free for 24 hours, the Black Hood will stop his rampage. This is, of course, easier said than done because 1) most of the people in Riverdale are trash and 2) the people who aren’t trash are probably still listed on the Black Hood’s archaic Sinner Roster purely because they’re normal people living normal lives. But you’d think, you’d think, people would at least try not to commit any obvious infractions for a single day. One day!

Throughout the episode, told in three parts (Archie and Jughead, Josie, and Betty and Veronica), I forgot the Black Hood even made this declaration. I’m assuming everyone on the show did as well. Like Mayor McCoy, inundated with death threats and staying at the Five Seasons, demanding Josie return before dark but still sneaking out (leaving Josie unaware and alone) for sexy time with Keller. Like Keller, also leaving his gay son (in the middle of a more-religious-than-not fanatic’s murder spree) after the Black Hood proved bold enough to break into a police station to kill a dude.

Ron Weasley said it best: “She needs to sort out her priorities.”

So Riverdale flunks this test, but what does it matter?  Is a nuke about to drop on Riverdale High? Or will the Black Hood just continue on as he was because no one’s actually looking for him but Betty?

And Betty….I sigh so heavily at Betty. Bless her heart, she thinks she’s somebody. After promising the Black Hood she’s coming for him, she sets her sights on Keller. This isn’t an immediately poor conclusion to jump to (the Black Hood did get into the police station, shoot a dude, and leave), but Betty would have realized Keller was innocent with two minutes of actual investigating. After she embarrasses herself by breaking into his house (“Think of all the locked doors!” she says, after Veronica encounters one locked door in a house she doesn’t live in), Keller simply provides alibis for the murders. But Betty’s determined to stay in his business anyway and follows him to the motel where he and Mayor McCoy are knocking boots.

I don’t sigh as hard for Jughead, who just can’t catch a break. I do sigh but more out of weary resignation that he’s destined to be miserable or more miserable at any given time. This week, he’s delivering “pancake mix” for Penny Peabody. After telling Jughead that FP was attacked, Jughead jumps at the chance to please Penny into helping his dad, too blinded by his determination to help FP that he forgets his father’s warning about her and ends up blackmailed and under Penny’s thumb, suffering through her vengeance for some slight from FP. I’m mostly indifferent to Jughead’s slow spiral into criminality, but I’m glad the show remembered he and Archie are best friends, or something like that, and gave them a chance to spend some time together (and for Archie to be there for him after their wonkiness in previous episodes).

Finally, there’s Cheryl and Josie who might have the most successful of these tales, at least from a 90’s Lifetime movie standpoint (which is a pretty good standpoint let’s be real). If you felt the same warm fuzzies I did at seeing Josie and Cheryl hang out as friends, they soured quickly as Cheryl advanced toward full-on Single White Female. After rescuing Cheryl from Nick, Josie’s now the object of an obsession. Here’s Josie, finally with a storyline and it’s all about Cheryl gaslighting her. Still, I cross my fingers and hope real hard that we’ll get some followup on this. With Josie. On my screen. Next week. (But I will not hold my breath.)

I was decently surprised (and freaked out) by Cheryl listening to Josie’s new song while sketching a picture of them together, a quiet confirmation that Cheryl left one, if not all, of Josie’s alarming secret admirer messages. Cheryl’s codependence is well-documented (she and Jason were weirdly close after all), but girl, really? Please seek help. Maybe Cheryl’s intentions were noble in cutting Josie off from a maybe-reformed Chuck Clayton, but she’s tormenting Josie. And with her knowingly false accusation against Chuck, Cheryl may have just landed a spot on the Black Hood’s list. Though, let’s be real, if he’s any good at making lists, Cheryl would have been on it already. So let’s call this a failure for Cheryl.

Despite the tiny matter of anyone actually trying to be on good behavior this week, I’m not as annoyed by this episode as I’ve been with others. “Tales” isn’t the most thrilling, but it’s coherent, continuity from last week is intact, and the disparate plots work with its gimmicky three-part structure in a way it wouldn’t in a standard episode. But as these characters find less and less reason to care about the Black Hood or who he’ll hurt next, I find myself with the same problem.