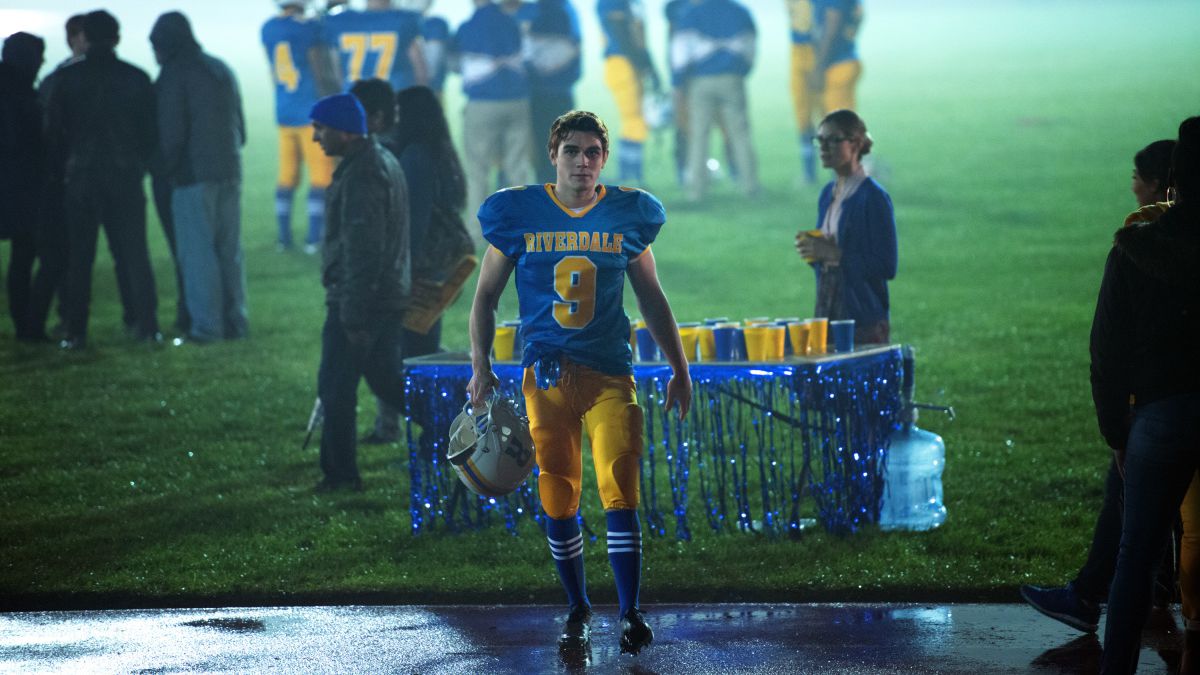 By the end of Riverdale‘s “A Touch of Evil” someone has been arrested for Jason’s murder, but it’s pretty obvious they aren’t quite guilty. It’s too early to even draw up a semi-conclusive suspect list, but we know at least one person in town should be in prison: Ms. Grundy.

The only solace you can find in this arc is that the show is leaning into Grundy being self-serving, but it’s still allergic to labeling her a predator. But she is one, and nothing makes that more obvious than her insistence to Archie that they’ll both go to jail (no just you, lady) and he’ll be expelled (also no) if their riverside picnic, and relationship, are discovered. Yet promos indicate that Archie and Grundy will be played more for titillation than anything, which is…gross. K.J Apa may be just nineteen years old (and very built), but let’s not forget that Archie Andrews is fifteen in this series.

Even if Grundy and Archie weren’t totally skeevy, their entire relationship feels less and less necessary on a narrative level. We know that the two won’t last, as Riverdale will eventually commit to the Betty/Archie/Veronica triangle (and Grundy has to go to jail or at least disappear offscreen eventually). As of now, Grundy and Archie’s relationship is a way for the show to claim edginess — but spending all this time watching Archie profess his devotion while she manipulates him is uncomfortable and, in an episode that scrambles to make up for ground (and characters) left uncovered in the premiere, a waste of time.

After the awkwardness and heartbreak of episode one, you’d think the love triangle would feel more urgent, but the second episode implies Riverdale was just dipping its toe in love triangle water. Despite his attraction to Veronica, Archie’s totally committed to Grundy (ugh). His interest in Betty is purely platonic, and his and Veronica’s affection for her probably won’t allow them to pick up where their kiss left off anytime soon. So the events of the premiere are rather quickly resolved, as a crushed Betty comes around to being friends with Archie and Veronica again. Lili Reinhart does a great job capturing Betty’s heartbreak (she managed to remind me of my own high school era boy troubles), but she’s mostly over it by episode’s end.

That’s probably the most unrealistic piece of this episode. It’s high school after all, and no drama has ever been resolved so quickly there. After Betty confesses her feelings for Archie, him and Veronica kissing is just insensitive enough to warrant at least a month of dramatics in the real world. But this is fiction and there’s something refreshing about there being too much affection between everyone (Betty and Veronica, Betty and Archie) to prolong their fight.

It’s the same with Jughead and Archie, who patch things up, and “Evil” does a lot of good for Jughead. At first, I thought Archie would have made a better narrator, but this week proves Jughead is a better option (though his novel is truly terrible). He’s more aware than his peers, both of himself and them. He’s the first (but surely not the last) to call out Grundy’s murky motivations, and he doesn’t blink at Reggie’s taunting or even at Archie’s meager threat. Compare this to Betty, Veronica, or Archie who are currently trying to figure out just who they want to be, and the difference becomes stark.

This second episode does a better job complicating Archie’s character than the premiere did, without making him into an outright jerk (but he wouldn’t really be Archie Andrews if he was a total ass). He’s vulnerable to Grundy’s manipulation, and even when he resolves to tell the truth about being at the river, he still promises to keep her out of it. But he gets his butt kicked defending Jughead from Reggie and apologizes for his earlier jerkiness.

With the exception of the Pussycats, other characters also benefit from “Evil.” We get a good look at Reggie Mantle’s assholery, and Kevin Keller may just escape gay best friend purgatory after all. Cheryl, in particular, was in need of this episode. After the discovery of Jason’s body, she’s convinced Polly that Cooper killed Jason, but her Queen Bee exterior is momentarily cracked by Betty’s threat to kill her if she doesn’t leave her house (if Betty killed Jason I will just die from loving it so much). She’s further rattled during the football game, where she bursts into tears at the memory of her brother. It’s a good attempt at humanizing her, and even before she’s arrested we can guess Jason didn’t die that day as she tells Veronica “he was supposed to come back.” The melodrama of Cheryl’s “I’m guilty” notwithstanding, her innocence is guaranteed.

Riverdale is doing its best to make this murder mystery interesting, but I still care very little about our murderer and care a whole lot about our characters. Jughead and Archie’s reconciliation scene was so cute and earnest I could barely stand it, and Betty and Veronica’s little vow is adorable and well-intentioned but destined to be broken. Until we get a better sense of Jason Blossom and his links to the rest of Riverdale’s residents, his death feels like a distraction from all the good stuff.