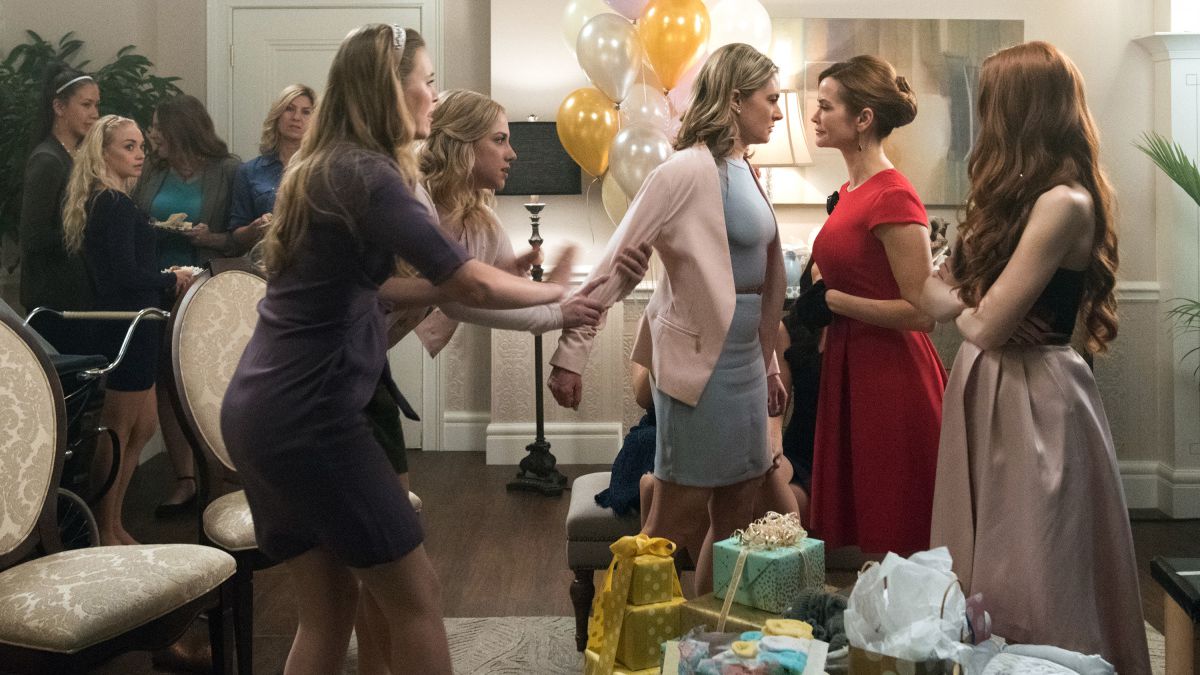 You’d think after a two week hiatus I’d be more excited about Riverdale’s return, but…I wasn’t. The show isn’t without potential, and it’s not totally incapable of meeting it, but the longer the season goes, the more determined it appears to shun all the good things about it and cling even harder to its weakest parts. The previous episode wasn’t all bad, bolstered by its focus on the kids and the bonds at the show’s center, but “The Outsiders” further proves how iffy the show’s instincts remain.

I’ve already gone on record about how frustrating the show’s reliance on the parents is, so I won’t repeat myself except to say that no one is tuning in to see what Fred Andrews is doing. Or Alice Cooper. Or Hermione Lodge. Or FP Jones (though he is, mostly due to Skeet Ulrich’s performance, the most interesting of the bunch). These were barely there characters in the comics, and now they’ve only risen to narrative prominence because of their actors. But Luke Perry, Madchen Amick, and Marisol Nichols don’t warrant the kind of boring takeover the Riverdale parents are currently leading.

Rather than allowing the adults to complement the kids’ stories, the kids are doing that for their parents, and every episode has a new Riverdale PTA feud. This week’s is Fred vs. Cliff Blossom (who wants that damn drive-in for himself). Later, in a plot development no one asked for, we’ll learn that we’ve also got Hiram vs. Fred (as well as Hiram vs. Hermione) because he knows about their affair.

Some effort is made to include the teenagers in this by Archie (rather naively) thinking he and a few friends can replace the construction crew his dad lost. This soon devolves into Moose being attacked by vandals, and Archie going up to the Southside Serpents and essentially asking for a beatdown. He’s convinced FP is sabotaging Fred, even though nothing in the previous episode would indicate he’s that petty. A criminal instructing one of the Serpents to date Kevin to get an in with the Sheriff? Yes. An alcoholic? Maybe, no one seems that concerned when he shows up at the construction site? But petty? No.

It’s a clumsy attempt at producing conflict, one that isn’t even really resolved. Archie bit Jughead’s head off for not telling him FP is a Serpent, but tells Jughead he can tell him anything even though he was a pretty big douchebag about something Jughead was obviously ashamed of. Maybe this could have worked better if Riverdale bothered to offer an ounce of nuance to the main characters this week rather than storing it all up for the supporting character parents.

This is an episode in which no one is interesting, save for Polly who’d handled with kid gloves throughout the hour. Despite all of our assurances that Polly isn’t out of her mind, everyone’s quick to treat her like an invalid incapable of making her own decisions. Everyone’s always talking about Polly or to her, but no one’s listening to her. Even Betty, Polly’s biggest advocate, can’t quite understand why Polly–locked away in a mental asylum and abused by her parents–is hesitant to trust them again, even though she does her best to give them a chance with the baby shower. So it’s something of a relief to see Polly making a decision on her own, even if living with the Blossoms will likely be a nightmare, too.

But it’s more attractive to Polly than staying with her determinedly messy family. I can’t see why anyone continues to have faith in either of the Coopers (or in the Blossoms for that matter). While Betty’s flipping and flopping may make some sense in real life (they are her parents after all), narratively it doesn’t work to watch them repeat the same cycle every week.

There’s some forward momentum this time around, in that Daddy Cooper is tossed after Alice learns he insisted Polly have an abortion. This is incredibly upsetting to Alice, because he apparently has a habit of demanding abortions from the women in his life. When he won’t allow Polly back home, she throws him out which would be more triumphant if we didn’t know what an abysmal parent Alice is even without her husband around. Though she swears she never intended to hurt Polly by shunning her, tossing her into a mental asylum, and demanding she give up her baby…well, that’s exactly what she did.

Is it because Riverdale is run by a bunch of middle-aged writers on a nostalgia kick that I have to spend more time watching Luke Perry brood and Madchen Amick rail than anything else? This show was always taking a risk by adapting the source material as a murder mystery, but staying rooted in the comic characters would be what made it watchable. But “The Outsiders” is an episode devoted almost entirely to the parents, while the kids (the people we’re actually watching this show for) get left behind.