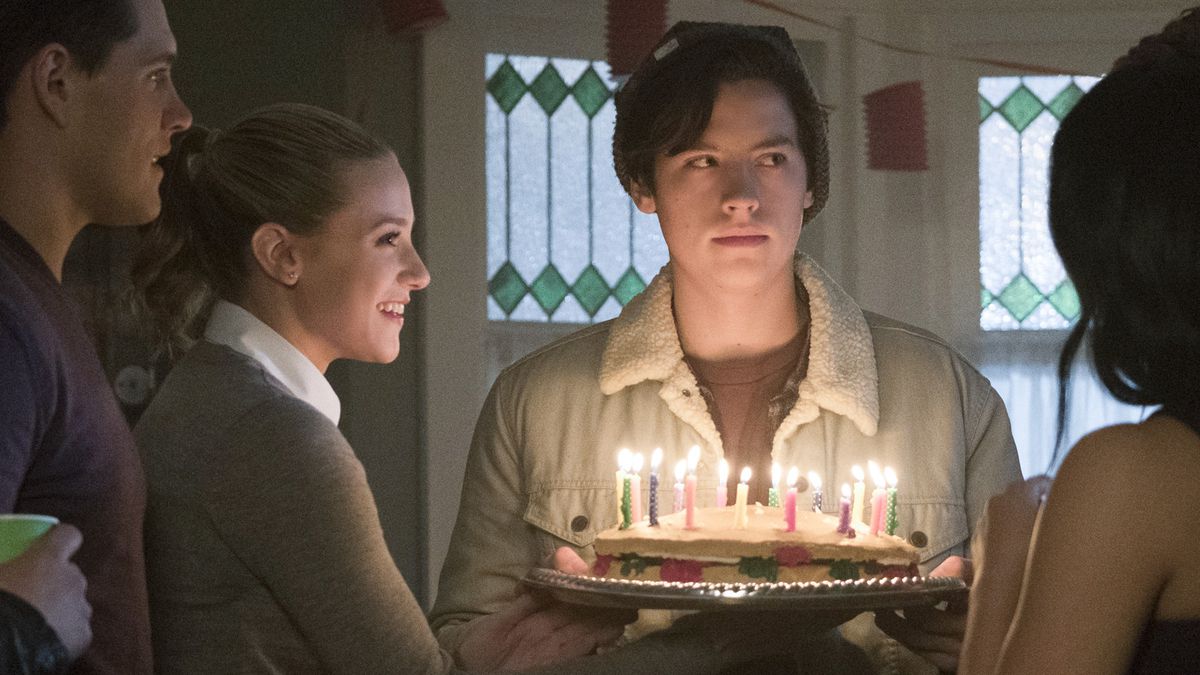 Ah, the party episode. It’s about time Riverdale had one, and it couldn’t have come at a better time. We’re nearing the end of the season, and the show needs to pick up the pace yesterday. After the stability and restraint of “Lost Weekend”, I’m hesitantly optimistic about the show landing these last couple of episodes. For a big party episode it does exactly what it’s supposed to do: Jughead’s birthday gives a glum Archie a chance to let loose, Betty an opportunity to prove her girlfriend bona fides, and everyone an excuse to get together and behave poorly.

Though it’s Jughead who’s supposed to benefit from this cute little gathering, it’s really just for Archie and Betty. Betty wants to show Jughead a good time despite both Archie and FP (the two people who know Jughead best) warning her that Jughead doesn’t like parties. Her heart’s in the right place, so I’ll give her a pass, but still. Meanwhile Archie’s just too thrown by Fred and his mom finally divorcing that he doesn’t care very much about what Jughead wants.

I’m not sure why it’s taken this much for Archie to consider his parents’ marriage over (when Veronica was freaking out over their parents being together Archie barely reacted), but better late than never I guess. This at least gives him something more to brood over than his music, and it’s such a relatable thing for teenagers who may or may not be reconciling with the reality of their parents no longer being the unit they’re used to. The usually open and honest Fred is surprisingly unreceptive to his son’s needs at the moment so of course he leaves Archie and Jughead at home alone where Archie becomes very, very drunk.

Veronica is having a similar struggle as her father threatens to take Hermione down with him unless Veronica testifies to what a good father and husband he is. Though it’s pretty obvious she’ll end up doing it to spare Hermione, it gives Camilla Mendes something to do, and it’s not a bad way of facilitating a hookup with Archie. With so many parental issues floating around this show, someone has to bond over them, and a drunken Archie (humiliated by his altercation with Valerie and the whole class finding out about Grundy) is the perfect person to share Veronica’s woes with.

It’ll also give the show a chance to pick up the love triangle. It’s difficult to say how much of a triangle it’ll really be, but Jughead’s comment about Betty only slumming it with him until Archie notices her makes me think Betty will have a definite reaction to Archie and Veronica becoming a thing. Veronica also doesn’t tell her so she clearly suspects the same thing. It’ll probably be somewhat painful to watch, but at the very least it’ll inject some tension into Jughead and Betty’s boring relationship.

There’s an attempt to add some texture to their coupledom with Betty waffling on telling Jughead what really happened with Chuck Clayton and Jughead letting his insecurities get the best of him, but it comes on so quickly that it’s hard to get a grasp on it. Then it gets resolved just as fast. All it takes is Cheryl (smarting from losing a dance-off to Veronica) and Chuck (still pissed about nearly drowning in a hot tub) teaming up to wreak havoc. Cue Veronica implying Cheryl loved Jason a little too much (I gasped), and Chuck telling everyone about Betty’s trip to the dark side. Jughead just has to punch him, but Jughead’s alternative white boyness is not ideal for physical altercations so FP acts like an adult and kicks Chuck out and advises Jughead to make nice with Betty. Which he does via an earnest chat and milkshakes.

It isn’t strage that Jughead would have some uncertainties about him and Betty, especially when we consider his family. It actually makes perfect sense. It makes even more sense that he doesn’t really like parties (what annoyingly alternative white boy does?), but the show seems worried we won’t get that for ourselves so it has to spell it out with a debrief that’s either very mature for a couple of teenagers or just a rushed resolution.