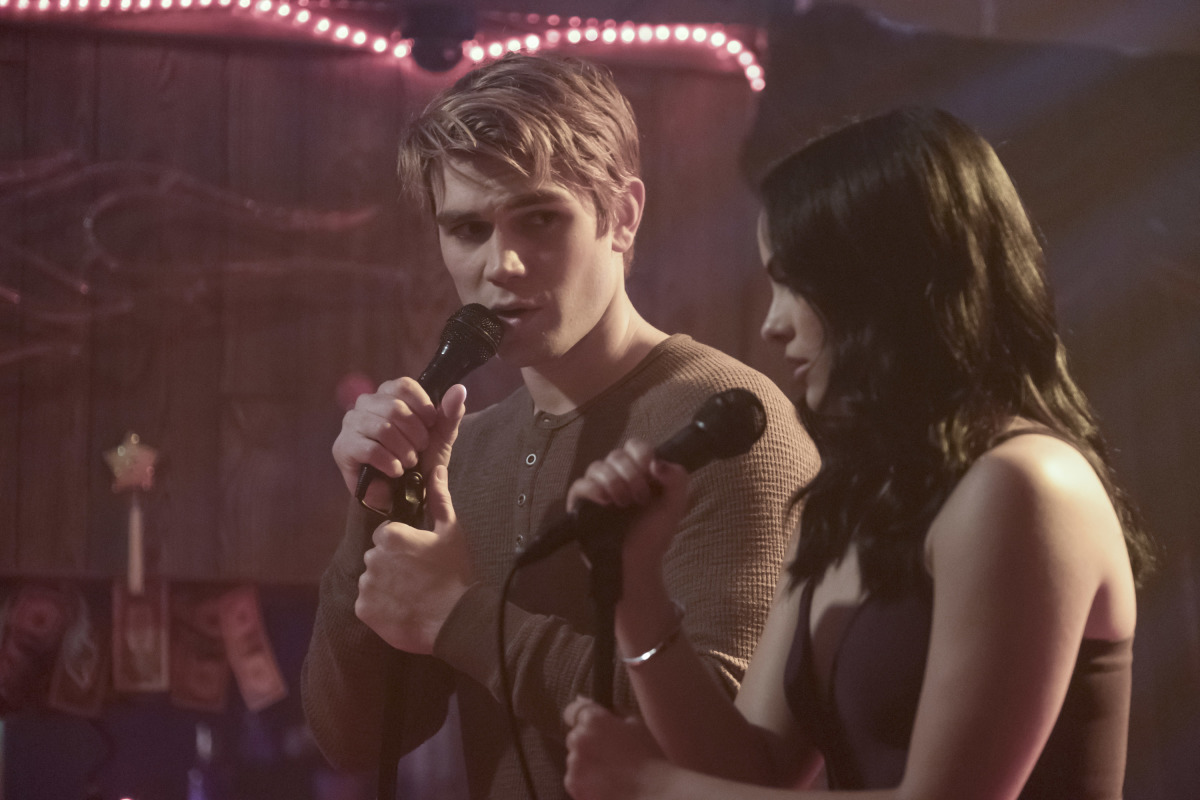 Fact: The Black Hood hates teen melodramas and is punishing Riverdale for being the backdrop of a teen show called Riverdale. Everything he hates is the very reason we’re watching especially people getting busy all over the place. This week it’s Archie and Veronica. The horny teenager is a teen drama staple, and honestly, Riverdale should have been having a lot more of this. Everything is so doom and gloom around here, the brief — very brief — respite is a welcome break. But all good things must come to an end, and soon Veronica and Archie are tiptoeing around each other and the Black Hood after Archie spontaneously declares his love for her and Veronica doesn’t say it back. But thank goodness for smalltown murder mysteries or else they’d actually have to talk about it!

“House of the Devil” is the first episode in awhile in which we’ve been equally focused on the murder and the standard teen melodramas. Riverdale’s never been great at balancing the two, but this episode gives it a fairly good shot despite some mixed results. While Jughead and Betty deal with the Black Hood in the more direct manner of investigating him, Archie and Veronica have coped by defying his puritanical “no sex without marriage/among teenagers/at all” rule. (We will not discuss Archie’s too-long moment of walking around town packing heat). But when Bughead passes the investigative torch, Archie and Veronica look into the house where the Riverdale Reaper slaughtered the Conway family and where the Black Hood sent Betty.

Veronica and Archie investigating together is quite cute, and a welcome change of pace. Sure, they’re only doing it because they don’t want to have a conversation. And sure, they lack the foresight to not accuse people of murder when they’re alone in private areas with them and for some reason visit the Murder House in the middle of the night instead of during the day. But wouldn’t we all do that?

In any case, kudos to them for being a bit more useful in a single episode than Betty and Jughead have managed in multiple. At the Murder House, they learn about a third kid who escaped the massacre, and a little bit of research identifies him as creepy janitor Mr. Stinson. Who, of course, isn’t the Black Hood but manages to shed a sliver of light on Riverdale’s history of seeking justice wherever it could get it.

In the end, we’re no closer to finding the Black Hood (if you’re watching Riverdale for the mystery, then…you’re outta luck aren’t you?), but Archie and Veronica are no more. Their breakup isn’t exactly satisfying, or even particularly heartwrenching. Only because it’s so contrived, based in Veronica’s fear that she’s too emotionally stunted to remain in a relationship with the more openhearted Archie. This, of course, isn’t true, and Veronica will realize it just as Archie and Betty inevitably decide to give their own relationship a shot. I’m definitely here for the show edging its way back toward its comic roots, but could it at least try to let it all unfold in a less predictable way?

Over on the other side of town, Jughead welcomes FP home but is thrown for a loop when FP announces he’s leaving the Serpents. I’m trying, really trying to invest myself in Jughead and the Serpents, but the paper-thin characterization isn’t working. Tall Boy’s just there to be loud and wrong, Toni’s there to be a sound ear, but nothing about the Serpents is interesting. FP’s return provides a welcome jolt so it’s a bit of a relief when he announces, after learning Penny’s blackmailing Jughead, that he’s not retiring after all. But this, unfortunately, means more angsting from Jughead, who dumps Betty in the name of “protecting” her, which might have packed more of a punch if Betty hadn’t done the same thing only a few episodes ago, and if it didn’t suffer from the same contrivances as Archie and Veronica’s split, rushed to this conclusion as if Riverdale’s writer’s room was trying to cover ground it lost in previous episodes.

Because it’s not like Betty requires much protection. It’s Betty. This is the girl who almost boiled Chuck Clayton, who vows to catch wannabe serial killers, the girl who decides she wants to be “Serpent-adjacent” and slings herself around a pole, in her underwear and onstage in front of her friends, perfect strangers, her boyfriend’s dad, and her mother. Maybe this was supposed to be a kinda fun, kinda sexy thing, but I was too busy cringing.

It’s probably because Riverdale’s been so focused on its murders and other shady activities that it hasn’t been able to keep up with the teen melodrama it does best. Cringing aside, I was unexpectedly delighted by this episode (well, except Betty’s interlude with the pole), and even though I’m not feeling how it got there, I’m interested in seeing Archie and Betty navigate singledom, and each other, for the rest of the season.