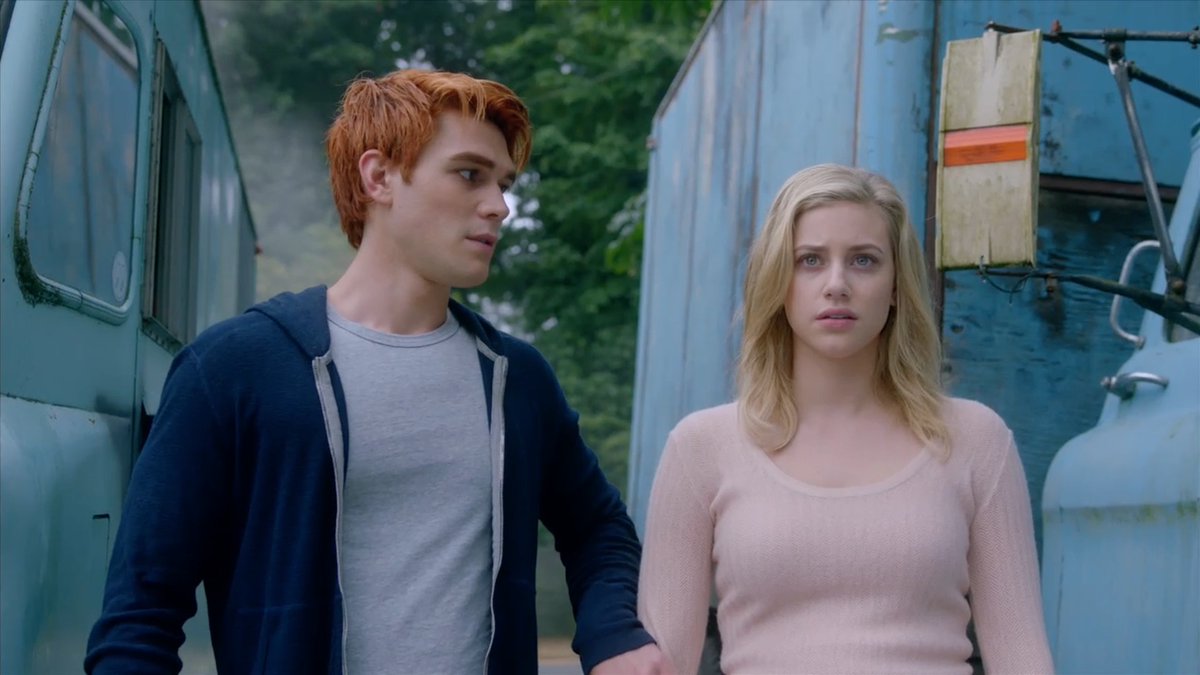 After last week’s strong episode, “Death Proof” undoes most of its good work. Imagine Riverdale at Thanksgiving dinner, surrounded by its strongest narrative conflicts which it sees not as Good Things but as Insufferable Extended Family You Only See Twice A Year For A Reason. Now imagine Riverdale stuffing its face with all the requisite holiday food and fleeing the table — indeed, the whole house — as quickly as possible and promising to see everyone next year.  “Death Proof” is confoundingly allergic to sticking to its guns and letting things play out, burning through story rather than spending any time with it.

After doing as the Black Hood demanded — ruining her friendship with Veronica and breaking up with Jughead — Betty’s no longer worried about what the Black Hood may do to her. Or to them. Now she can warn Polly and confide in Veronica and Jughead (not until the end of the episode for Jughead though, for no reason other than Just Because). The Black Hood doesn’t care who Betty talks to, telling them about him or anything else, all he wants is the Sugarman, who’s supplying all of Riverdale with Jingle Jangle. By episode’s end Betty’s so unafraid of the man she was super afraid of yesterday that she’s coming after him next.

None of these things are bad. All of these things are to be expected, but they come too rapidly, and at multiple points, I wondered if, somehow, we’d skipped several episodes ahead. Just when Riverdale found the beginnings of a narrative groove, it hurried to get out of it. Maybe it can’t stomach the idea of actually testing the relationships between the characters, but running through promising story beats in a span of a scene or two doesn’t make for satisfying viewing.

Not to mention the show’s determination to flip-flop its way through most of its parent-child relationships. It’s true Riverdale often forgets what these kids were mad at their parents about a scene ago, but how could it have forgotten that the last time we saw Cheryl and Penelope, Cheryl was threatening to kill her? Now a recovered Penelope blames Cheryl for Nick attempting to rape her, accepts hush money from him, and prohibits Cheryl from pressing charges. (Oh, yes Nick’s still alive because the Black Hood is good for nothing). There’s a lot to like about Cheryl and Penelope, including Penelope’s (likely shortlived) determination to prove to Cheryl that she loves her. But it’s all out of line with what we saw earlier this season so what we have now is tainted by narrative tomfoolery.

This eventually leads us to the Sugarman, whose Jingle Jangle leads to a raid of Southside High (no one questions the legality of this except for Jughead, but the ACLU would be all over it). Jughead encourages the Serpents to take on the Ghoulies (because, you know, this is their fault) but Tall Boy would rather work with them to take on the Northside because….reasons, I guess. Long story short, the only solution to this problem is Fast & Furious: Riverdale.

I won’t go through the hilarity of Jughead and Archie pretending they’re Vin Diesel’s pasty little cousins or Cheryl’s absurdly cute drag race outfit, but the only point is that it ends up with the Ghoulies’s main man being arrested. And thanks to Cheryl, Betty gives the Sugarman’s name to the police. He’s Jughead’s teacher (everyone is trash), and the Black Hood kills him in jail anyway. And there’s Betty, swearing to the dude who just walked into a police station (and will totally walk out) and killed someone, that she’s gonna make his life hell.

Can we be smarter please?

Not that it matters anyway.  Betty’s not gonna die, and that’s fine. No one’s watching Riverdale fearing for our regulars. The same way no one’s watching The Walking Dead thinking Rick Grimes is gonna kick the bucket. It’s just not gonna happen. But in the misery fest that is TWD, there’s a lot of other things that could happen (and lots of other people who can drop dead). There are other torments that will be lasting and painful, and whatever tension the show can create is based on them.

But Riverdale doesn’t have that. It could, and last week it did. We saw possibilities that would allow our characters to toil and suffer in ways that weren’t death. We saw things becoming personal, and just like that it was taken away so Riverdale could hop/skip/jump over the consequences it put on the table. Last week Riverdale laid its hand on a hot stove. This week? It recoiled and immediately plunged it in cold water.