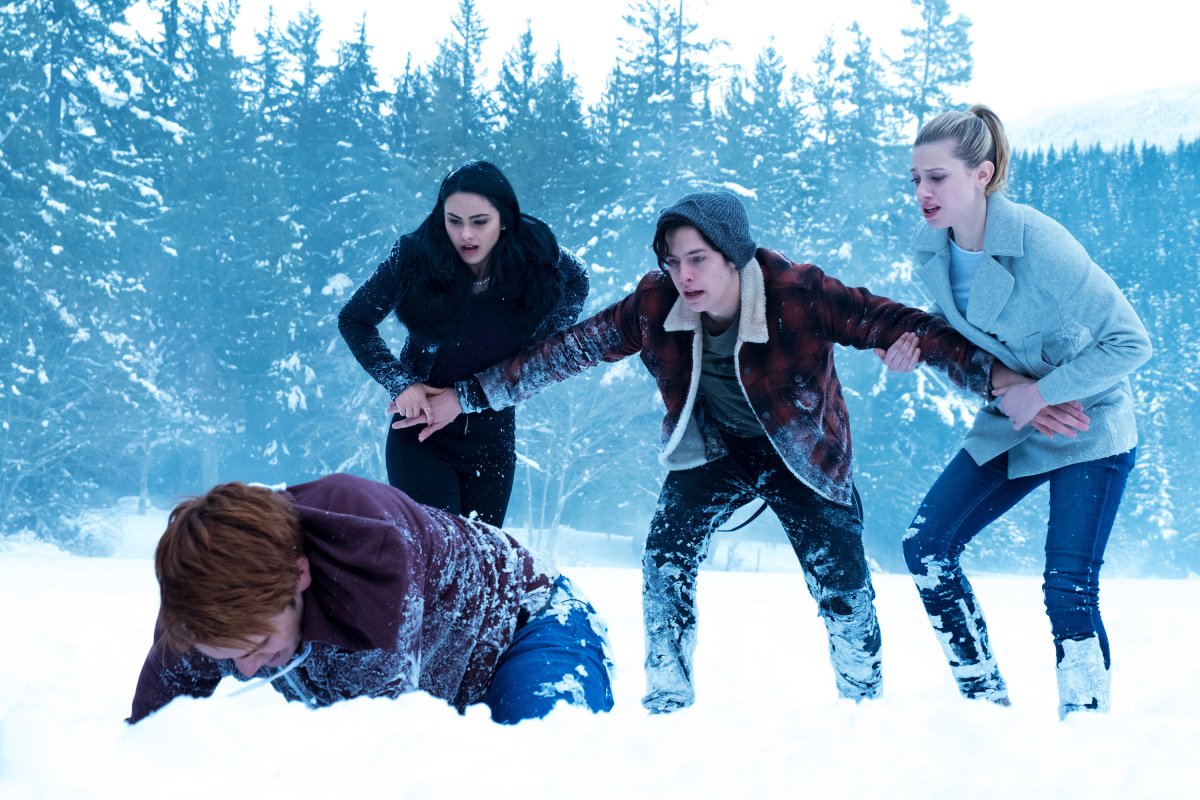 I told you the reason Cliff killed Jason would be boring, and it is but who knew it would be this boring? So Cliff’s maple syrup company was just a front for drug running (cue Beyonce’s dulcet tones singing “cliche, cliche, cliche”), and he killed Jason to keep him quiet. There are like, no good reasons to kill your kid, but this is what you come up with? Thankfully “The Sweet Hereafter” doesn’t spend the whole episode figuring this “revelation” out and instead focuses on Riverdale’s reluctance to accept that one of its scions was a drug-pushing monster.

I also told you that Riverdale’s adult population exists only to make these kids’ lives harder, and that hasn’t changed. Hermione’s preparing for Hiram’s return by being absolute trash, even asking Veronica to use her feminine wiles to convince Archie to convince Fred to let Hiram buy him out. She’s a modicum better than Penelope, who ignores a spiraling Cheryl completely. And the Coopers hover somewhere around the middle, having pieced their demented family back together by pretending nothing (like Polly soon to give birth to her cousins) has happened. Then there’s Jughead, on his way to a foster family in a new school district because his mom can’t/won’t take care of him, Fred has a DUI from a while ago, and FP’s headed to jail.

Once again it’s up to our heroes to pretend to be grownups. Veronica doesn’t do what Hermione asks (like me, Veronica’s written Hermione off completely), and Cheryl burns her house down. Betty gets some candor from Alice and manages to convince Riverdale to stop being so crappy (though how they go from “Go to hell Serpent slut” to taking her advice is beyond me. And Jughead’s embraced by the Serpents. There’s room for all this to be a bigger deal than it actually is, but none of it feels that way. Rather it all feels like an unnecessary epilogue, and it’s lagging conflict proves it.

There’s a brief moment where it looks like said conflict may come in the form of the love triangle’s resurgence. Now that everything else is relatively calm, Veronica and Archie tell Betty about their romance, but she’s totally fine with it. Because she and Jughead are soulmates, you see (*insert eye roll here*). But here’s Archie shooting Betty curious looks and almost admitting he thought he and Betty would get together after all (since when, bruh?). But when Veronica calls him on it, he says it’s just because he wants him and Veronica to have the same relationship as Jughead and Betty.

Obviously, the love triangle will have to come into play again. I’ve been looking forward to it, but I’d hoped it might be a bit smarter about it than just having Archie suddenly questioning his earlier rejection of Betty now that she’s over him. That being said, this is the closest Archie’s come to having a storyline since Grundy was run out of town. There’s a moment when Archie pretty much says that “Yeah, I’m fine but none of my friends are” which is Riverdale in a nutshell: everyone else lives in this noir disasterland, but Archie’s been flown in from an all-ages comic and is wondering what all this murder is doing here when he just wants to be a musical jock torn between two girls.

I give the show some props for Archie’s dramatic rescue of Cheryl, pounding through the lake’s frozen surface to rescue her (bloodied fists and all), but it was another reminder that Archie has no personal stakes here. The show’s been grasping so hard for a way to make him relevant in this new world they’ve created that it’s no surprise he ends up holding his bleeding (dying?) father, shot during a “robbery” likely orchestrated by Hiram. I mean, I don’t care if Fred lives or dies (either way, we’ll probably see Molly Ringwald again, right?), but at least Archie will have something to really angst about next season.