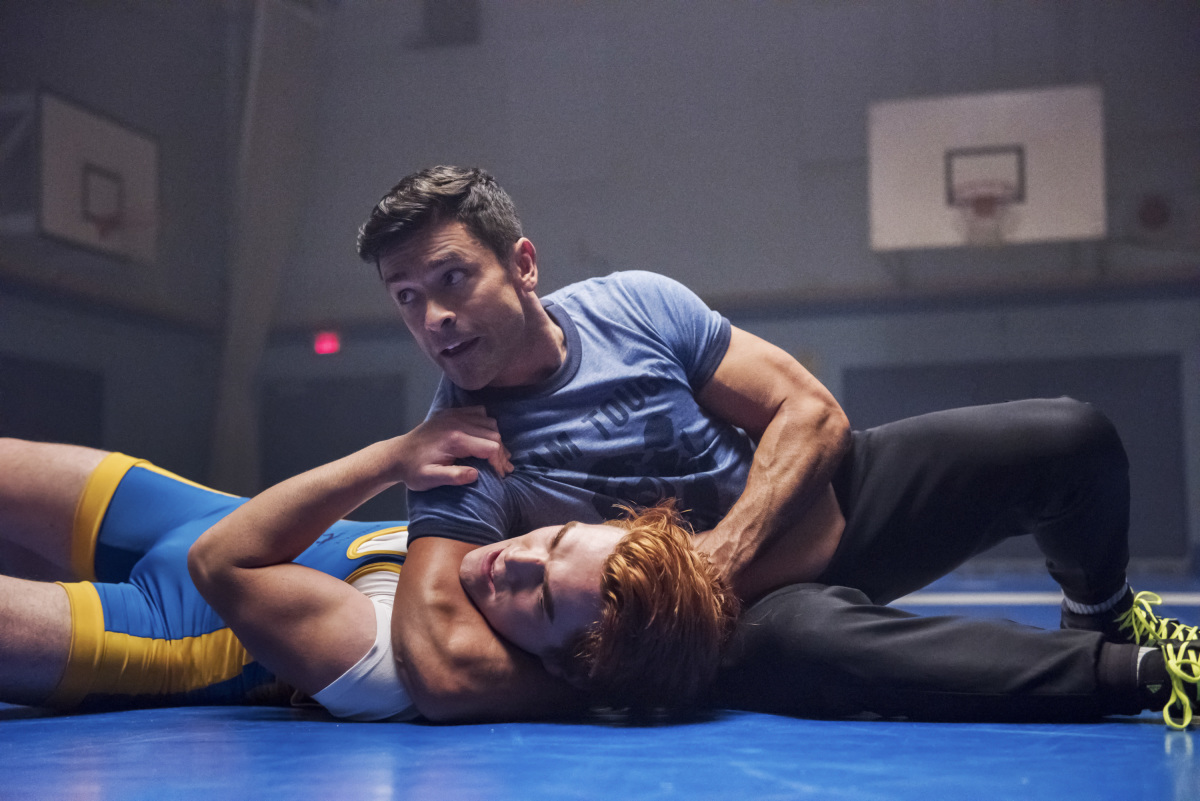 Oh boy. This episode was a mess, and unlike many of Riverdale’s messes, this one wasn’t even fun. It was, however, very, very uncomfortable.

“The Wrestler” is an episode in which, among other things (we’ll get to those), Riverdale has Hiram and Archie engage in a deeply gross (and unasked for) dick measuring contest. Tasked with getting close to Hiram by his new Fed Friend, Archie takes up wrestling (it’s Hiram’s favorite sport). On any other show, the absurdity of a teenage boy becoming the confidant of a grown man would be called out as, you know, absurd but not on Riverdale which sees nothing weird in any of this. Not even in an adult man challenging his teenage daughter’s boyfriend to a wrestling match and adopting a chorus about how Archie will never “win.”

Win what, Mark Consuelos?? Veronica? That’s your daughter, you weirdo! If you’re unsure of what we’re witnessing, Riverdale is quick to make it clear to you. This show is incapable of subtlety (sometimes, delightfully so), and we’re forced to watch Hiram, after watching Archie tank in tryouts against Kevin, declare Archie’s manhood deficient. Why should Hiram worry about Archie and Veronica being alone in her room when Archie clearly couldn’t be that satisfying of a sexual partner anyway? (Yes, this happened). You know what else happened? Veronica, to defend Archie’s honor or virility or something, gently corrects Hiram and informs him that Archie is actually super sexy.

Less repulsive but still irritating is Veronica’s languishing on the backburner of what could be a really awesome storyline for her. Her slow sojourn to the dark side could be compelling, especially as we watch her lose friends (like Josie) and decide that they’re the problem, not her criminal parents or her role in their shady dealings. But this is a fairly small story in the scope of the episode, and it’s somewhat confusing to see Archie getting a bigger slice of this particular cake. The episode’s final moments lead us to believe Archie may be more tempted by the Lodges than we expected, but if that’s the case, that’s quite a switch from Archie’s earlier determination to take them down, and that temptation already belongs to Veronica and is more effective on her.

Also making me uncomfortable (though not nearly as uncomfortable as everyone’s casual acceptance of Hiram Lodge skipping work to watch teenage boys wrestle) is Riverdale’s teen population just now figuring out American history. As founder’s day approaches, everyone’s in a tizzy to celebrate some dead white dude who “founded” Riverdale. In this context (and in many contexts in this here land of liberty), “founded” means “slaughtered the indigenous population to lay claim to their land.” Jughead can’t believe it. He’s shocked! Horrified! Aghast! Disgusted! Besides the fact that I have a hard time believing Jughead is ignorant of this fact (he’s the resident history buff isn’t he?), this is also a story Jughead really shouldn’t be at the center of.

On some level, Riverdale knows this. Toni takes Jughead to task for reporting on this very new information, transferring his burdensome emotions onto Toni’s relatively chill grandfather. This, at least, is a relief because not only has Jughead only been a Serpent for ten minutes, the ultra-righteous indignation over something he didn’t even know happened until a second ago is just like a newly woke white person trying to tell marginalized people how to respond to their marginalization. And it’s pretty evident who should be at the center of this story: Toni.

Unfortunately, Toni’s barely a supporting character, and Jughead is arguably Riverdale’s favorite person. Even though Toni’s the one making speeches at episode’s end, we also know this story doesn’t quite belong to her when Jughead’s the one instigating it and angsting over it. It’s not like Riverdale couldn’t choose to do this differently if it wanted to, and there’s still time for it to do that. Toni has the same comic roots as everyone else, and there’s no reason her role couldn’t expand to do this story justice, and I really hope it does. Besides, Toni’s just more interesting and a welcome reprieve from all Jughead’s brooding, and giving the Serpents something legitimate to draw attention to (instead of say, their jackets) is a nice change for them.

That being said, it feels a bit like Riverdale has lost its focus. The Black Hood, despite its flaws, gave the show something concrete to work with, but without him, it’s pulling itself in multiple directions with no connecting thread. Archie’s investigation into the Lodges, and Veronica’s slow descent into darkness is in a different world compared to Jughead’s newfound activism, though there’s potential for intersection with the Lodges doing their thing. But Betty’s on an island dealing with her Cooper family drama so I’m crossing my fingers hoping they’ll find a way to draw these stories together soon.

If and when they do, you may hear from me again, but as of now, this is my last review of Riverdale. My time has become precious recently, and I can’t find the time to watch and review a show which is, more often than not, disappointing. I’ll still keep an eye on it, and if anything arises that I simply must talk about, we’ll meet again back here.