The Guardians of the Galaxy films are fun. Moments of chaos turn into laughter and heartfelt exchanges even draw a few tears.

The day after the release of Guardians of the Galaxy Vol. 2, I was at the theatre, ready for what I knew would be a great film. I wanted to see the growth and development of each character’s storyline since the first film, but mostly I could not wait to see Rocket Raccoon. When I watched the first Guardians film, I watched it expecting to laugh. I knew from reviews that it would evoke more than just a chuckle or two. In the end, there was a largely unexpected outcome: I related on a personal level with the portrayal of Rocket.

It seemed crazy to me, as a 30-something, black female that I would identify with the emotional story arc of a foul-mouthed, CGI “vermin.” That understanding became much clearer after watching Guardians of the Galaxy Vol. 2, and I realized: I am Rocket.

The thought first struck me with an exchange between Rocket and Chris Pratt’s “Peter Quill” in the first film. A drunken Rocket, in anguish, shouted, “Well, I didn’t ask to get made. I didn’t ask to be torn apart and put back together over and over and turned into some, some little monster.” 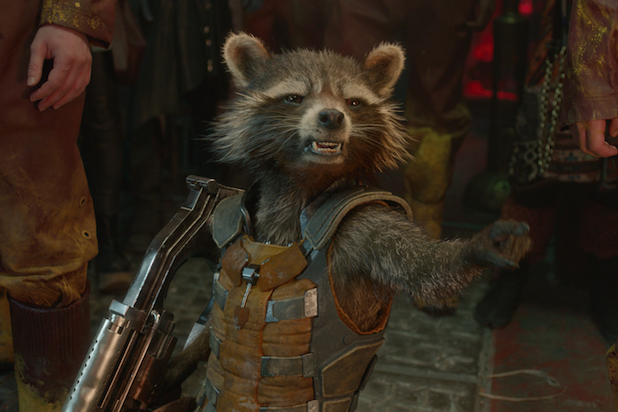 There it was. My jaw clenched. My eyes brimmed with tears. I felt silly. Then I understood. Rocket had never asked for the pain he endured earlier in his life and neither had I, just like millions of other survivors of childhood sexual abuse. The person I was in the wake of the sexual trauma, the woman I grew to be, was just as lost, hurt, angry and filled with self-hatred, like Rocket.

I did not know that Post Traumatic Stress Disorder was something that civilians could be diagnosed with until I was 33 and speaking with my therapist. The stigma of PTSD as a mental health disorder is slowly fading with increased awareness of symptoms and its association in society these days with military combat. I believed it was something only soldiers experienced. As I dug deeper and continued on my recovery and healing journey, I learned that studies and statistics show that victims of sexual abuse and sexual assault all experience traumatic coping mechanisms in the wake of these crimes. Not every soldier returns home with PTSD, but every sexual trauma survivor is forever changed.

If we look at the numbers, 1 seven percent of the U.S. population are military veterans and, according to 2010 Census data, this adds up to 3,241,809 veterans that will develop PTSD in their lifetime. 2,3 When looking at the entire U.S. population and subtracting out the veterans, 17,752,868 civilians will develop PTSD. 4,5 This means that civilians with PTSD outnumber veterans by more than five times. Causes include car wrecks, accidents, fires, natural disasters, and serious crimes such as sexual assault.

According to RAINN (Rape, Abuse, & Incest National Network), every 98 seconds an American is sexually assaulted and every 8 minutes the victim is a child. These numbers are sobering to digest. Millions of American men and women hurting from sexual abuse and sexual assault are coping in the best way they know how. Many are living with the symptoms of PTSD and not aware they are acting out because of the trauma.

That has been part of my journey. I have learned that the coping skills I developed after years of sexual abuse were from a child trying to deal with something she should have never known about as a five-year-old. I did the best that I could as a child. I suffered in silence for years, not reaching out to my family to make them aware of the abuse until I was 20.

The resulting behaviors, mood swings and an inability to maintain healthy relationships, were what I most identified with as character traits of Rockets. For those who have not seen the second film, I will not delve too much further into what we see and begin to understand about Rocket’s behavior, but we learn his façade is a defense mechanism.

Symptoms of Post-Traumatic Stress Disorder for sexual trauma survivors include repeated thoughts of the assault; memories and nightmares; avoidance of thoughts, feelings, and situations related to the assault; negative changes in thought and feelings; and increased arousal (for example difficulty sleeping and concentrating, jumpiness, irritability) according to the National Center for PTSD. Drug and alcohol abuse, codependency and sex and love addiction are frequently numbing mechanisms developed by survivors to cope with avoiding the pain of the trauma.

My life has been plagued by depression, anxiety, and a relentless pursuit of perfectionism to feel that it is okay that I even exist. The symptoms of PTSD are exactly what we see reflected in Rocket Raccoon’s portrayal. Director and writer James Gunn brilliantly crafted a character living in the wake of physical and emotional trauma to reflect the self-loathing, isolation, shame, guilt, and rage tendencies of PTSD.

Rocket’s personality appears on the surface to take the “I don’t need anything or anybody” mentality. He uses sarcasm to ridicule and deflect attention and repeatedly tries to isolate himself from the other Guardians. However, there are cracks in that furry, rough exterior that let us see the hurting creature inside. Rocket, despite all of his attempts to push others away, is actually a character deeply rooted in loyalty and love. We see this in his care and compassion for Groot, as both a baby and adult. We see this also in his connection with the burly and gruff Yondu. There is even a softer moment of reflection shown of Rocket at the thought of losing his friend, Peter.

Rocket Raccoon may be a fictional character but his behavior and coping mechanisms are very real to people. In July 2015, I launched a nonprofit organization to support adult women survivors of childhood sexual abuse and sexual assault. As I became an advocate in my community and began to share my story, I heard from countless women about their reflections of the same pain and lost behavior. We were addicts. We were alcoholics. We were standoffish. We hopped from one broken relationship to another. We did not know how to maintain healthy friendships or work relationships. We were however joined in the commonality of the pain we had experience and the fact that we are survivors.

Brenda McBride, LCSW, a friend and counselor who works with our organization shared with me something that helped me better understand why, in many cases years after the abuse or assault, so many of us are still struggling to cope. She said, “Trauma often leaves physiological imprints in our bodies and can be stored in the body. Trauma is not just an issue of being stuck in the past. It is just as much a problem with not being fully alive in the present. Trauma is not all in our heads.”

Rocket is not the only Guardians character to display PTSD. Each main character reflects it in some capacity. We see it in Nebula’s rage against her father. Mantis reveals the inner fear that fuels Gamora’s fighter mentality. We are reminded of it in Peter’s reflection of his childhood with the Ravagers. We understand it through Drax’s pain over the violent loss of his family.

But for me, it was Rocket Raccoon that felt very much like my kindred spirit.

Rocket finds his place with the Guardians. I encourage other survivors of sexual trauma to find their place to begin healing as well. Local support group meetings, counseling services, church groups, hotline help, are just a few of the countless resources, some at no cost, to help you to begin healing. Don’t suffer in silence. You know who you are and who you want to be.

Broken as I was for so many years, I am healing. Like pieces of a crystal vase smashed onto the floor, little bit by little bit, the glue of mental health support is restoring what was taken from my childhood and helping me to live vibrantly.

Rocket has his moment as a hero when he realizes he needs to lean on others to fight the battle. He cannot do it alone. We, as survivors can take a cue from this, and just by reaching out for help, become our own heroes.

The Toxic Side of Self-Improvement