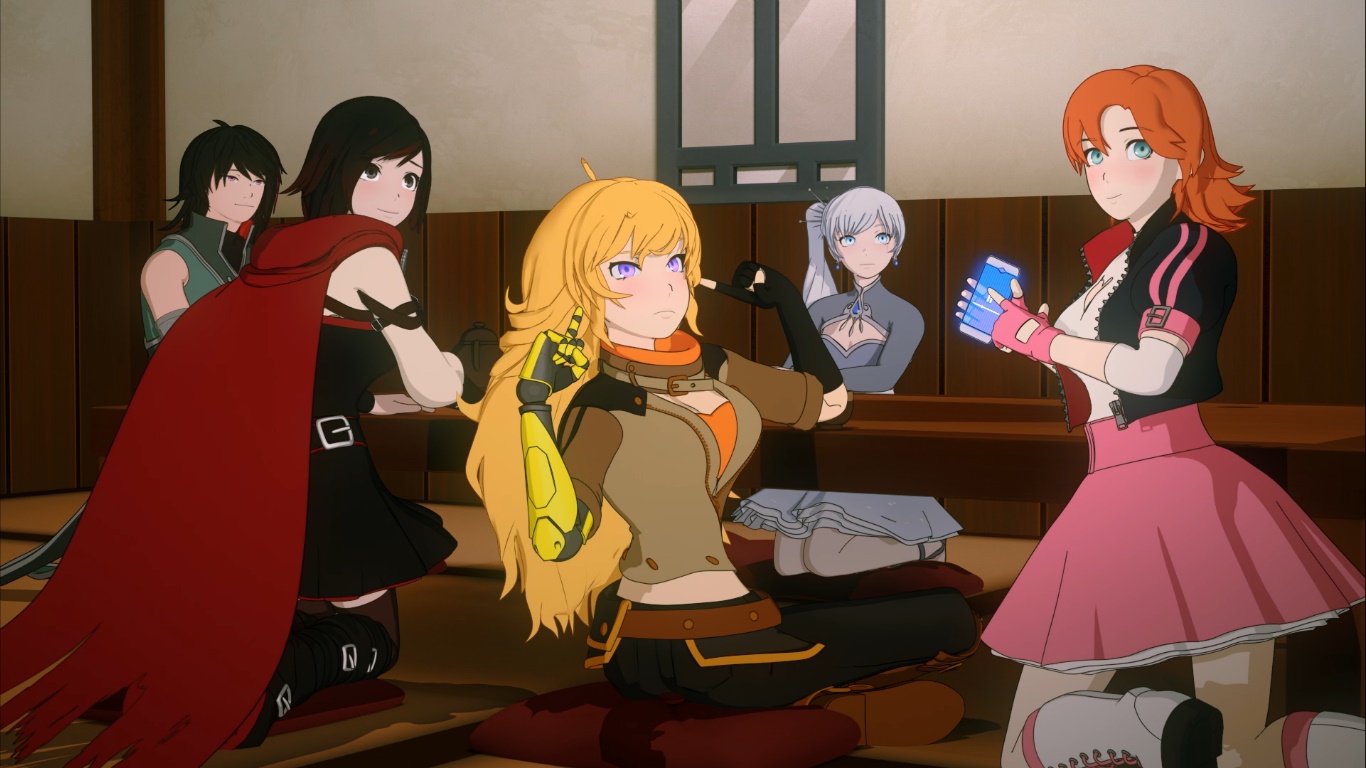 It’s been a while since the RWBY teens have all seen each other. They were separated after the fall of Beacon. They take the time to relax, eat and joke; reminiscing about the old days at school, before discussing more serious matters.

After fun and games and catching up, Yang doesn’t hesitate. She asks Ozpin point blank what he had done to her mother and her uncle. Ozpin comes clean; a little surprised that Raven divulged that information to her. Apparently, along with Ozpin’s reincarnation he possesses other magic. BIG REVEAL. Centuries ago, he’s the man who gave the four maidens their powers. The problem: his power is finite and diminishing. When he gave the four maidens their abilities it took a great deal of his power away from him. The remaining power he has is used to locate the new four maidens when the old ones pass away. Hence why he gave Raven and Qrow the ability to transform into birds. It’s so they can search for the new maidens more easily and efficiently. Qrow admits that it was a choice he wanted to make; both him and his sister at the time. Ozpin understands if Yang or the others would like to leave, but she decides to stay as long as he doesn’t keep things away from them or tell half-truths. And with that, the gang is fine to continue their mission. 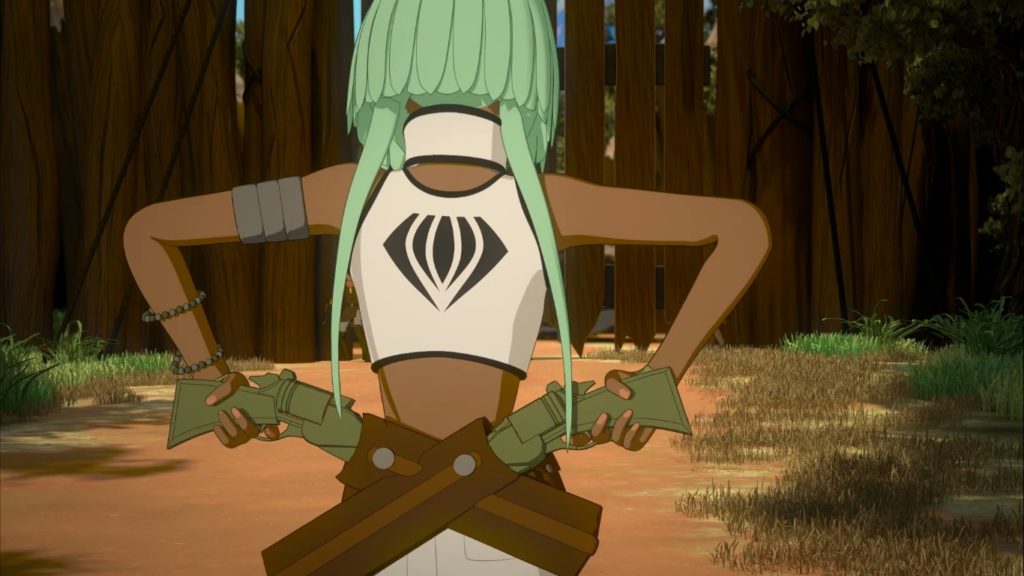 TROUBLE COMING FOR THE BRANWENS

The final scene of the episode shows that the villains (Mercury, Emerald, Cinder and Dr. Watts) arrive at the Branwen tribe hideout. A few episodes back, Salem sent them to persuade Raven to join them in taking down Haven. Can’t wait ’til the next episode, looks like we’re about to see Emerald in some action.

THE STORY OF THE 4 MAIDENS 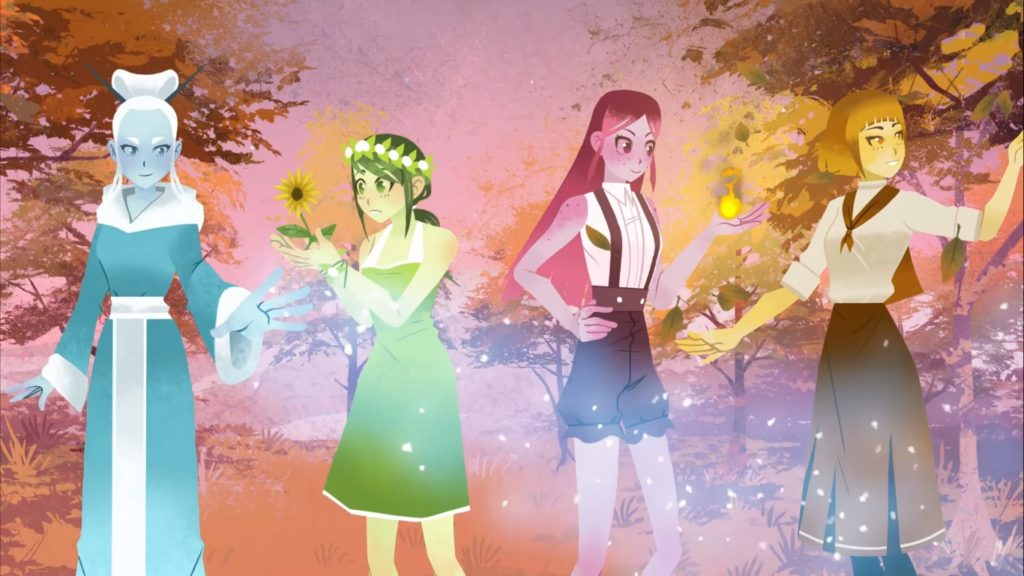 There’s a lot of talk about maidens. A couple of seasons ago, the story was explained. If you don’t remember, here’s how it basically went:

A lone wizard seldom had visitors at his small home in the woods. One day he found a maiden underneath a tree in front of his house. She said her name was Winter and she was on a journey waiting for her sisters. She sat in silence. The longer she sat the more he wished to share in her serenity and grew tired and went to sleep.

When he woke a second maiden appeared named Spring. To show her gratitude for the hospitality he had for her sister, she planted seeds in his garden.

Then he heard unfamiliar laughter. A third maiden appeared named Summer. She too was waiting for her sister. As it turned out, she was laughing at him because she found it funny he insisted on staying in his home. She persuaded him to come outside and for the first time in a long time, he left his home. The warmth of the sun brought energy and life and he felt much better.

At the end of the day, they prepared a feast. Winter set the table, Spring supplied the crops, and Summer prepped the meal.

The last maiden appeared named Fall. The wizard felt he had nothing to his name, but with the maidens help he now had everything he needed. He wanted to know why he was special and why they chose to do these things for him. Surprisingly, they replied that they didn’t do it because he was special, they would do it for anybody.

He summoned his magic and bestowed it upon the sisters. He said that now they can do so much more armed with the elements. They promised to carry on with their journey aiding others on their way. They only made one promise, to visit the wizard each and every year.

The take away from this story is that there was a man (Ozpin) who possessed magic and passed it onto four women.

Hmm. Personally, I don’t see the big deal that Qrow and Raven can turn into birds. I mean, *shrugs*. What’s more interesting, is the fact that Ozpin was open and his story matched Raven’s. If his story differed from hers, then I would question his credibility. So, this means that maybe, possibly, he can be trusted. But there are still some answers I need. Like, why did the Spring maiden (Vernal) agree to join the Branwen tribe? Raven was bad from the start and always had ulterior motives; I can see her being a traitor. But why would the Spring maiden also leave Ozpin?

Also, so… Qrow and Raven are twins. I did not know that.