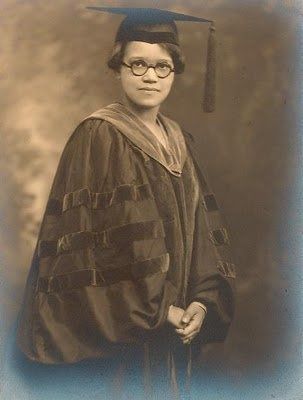 “Can you imagine looking for classrooms and asking persons the way, only to find the same unresponsive person you asked for directions seated in the classroom, which you entered late because you could not find your way?”- Sadie Alexander.

Sadie Alexander walked on the campus of one of the country’s most well-known universities and was blatantly ignored by her peers and staff. She entered college life with high hopes, eager to study economics. Yet during her first year, Alexander would have to battle racism amongst the typical challenges of a college freshman.

On January 2, 1898, Sadie Tanner Mossell was born to defeat the odds. She would grow up in the 1900s amongst racial segregation, discrimination, and even public lynching. Declared by her mother Mary Louisa Tanne, she was “destined to come into the world.” Through a climate of uncertainty Alexander’s life was molded by a legacy of greatness in her family.

It only seems fitting that Alexander would continue this legacy.

Her journey and triumph

Although Alexander had her heart set on going to Howard, her mother persuaded her to attend Pennsylvania University in the fall of 1915. While completing her undergraduate her experience was all but welcoming. She encountered racism and disrespect from all different angles. The library wouldn’t allow her to rent certain books, or they would lie about the availability of required text. The cafeteria denied her a hot meal because they refused to serve Black students. Radical slurs were often said as she walked past classmates. Her social life was grueling, yet she focused on her grades and allowed her hard work and dedication to shine through.

After graduating she became the first African American in U.S. history to receive a Ph.D. in Economics. “The Standard of Living Among One Hundred Negro Migrant Families in Philadelphia¨ was the title of her dissertation. She continued to break more barriers by becoming the first Black woman to enroll in the University of Pennsylvania School of Law. When she graduated with honors in 1927, she became the first Black woman admitted into the Pennsylvania bar. Despite her achievements, law school wasn’t a walk in the park. Many classes were only available to men and she continued to experience racism. Even with the aggression from her classmates, she was able to form a community during her time at Penn.

In 1923 she married Raymond Pace Alexander, and together they managed a private law firm. An issue they were both passionate about was the racially dividing issues in Philadelphia. Because of the unique challenges that African Americans faced much of Alexander’s work focused on civil rights and family law. In 1959, she opened her own law firm.

With her doctorate degree in economics, she spent a significant amount of time-fighting for the labor rights of Black workers. In March 1945, she gave a speech at Florida Agricultural and Mechanical College addressing these issues. Making profound statements such as:

“When labor, white or Black, native or foreign-born, understands that full employment means greater purchasing power for all people, which can be obtained only by giving every man capable of holding a job the right to work, labor will have solved its own problems…. The right to work is not a Black, nor a white problem but a human problem”

As an economist, she understood the power and benefit for the nation to have full employment regardless of race. Alexander said, “I need not state to you that full employment for all willing and able to work is also the solution to all over national difficulties.”

Alexander lived a long life, 91 years, and continued to fight against injustice to the very end. In her later years, she worked with the White House Conference on Aging appointed by President Jimmy Carter, to address the economic and social needs of the elderly.

Throughout Black history, there have been many ways to combat racism. Alexander exemplifies fighting hatred through the advancement of her education and political work. She is a reminder to all women to hold their ground. That if you find yourself in a room, surrounded by people who neither look like you nor support you, you still deserve to be in that room. When women take up space, and pursue their dreams, regardless of the barriers, they can achieve great things.