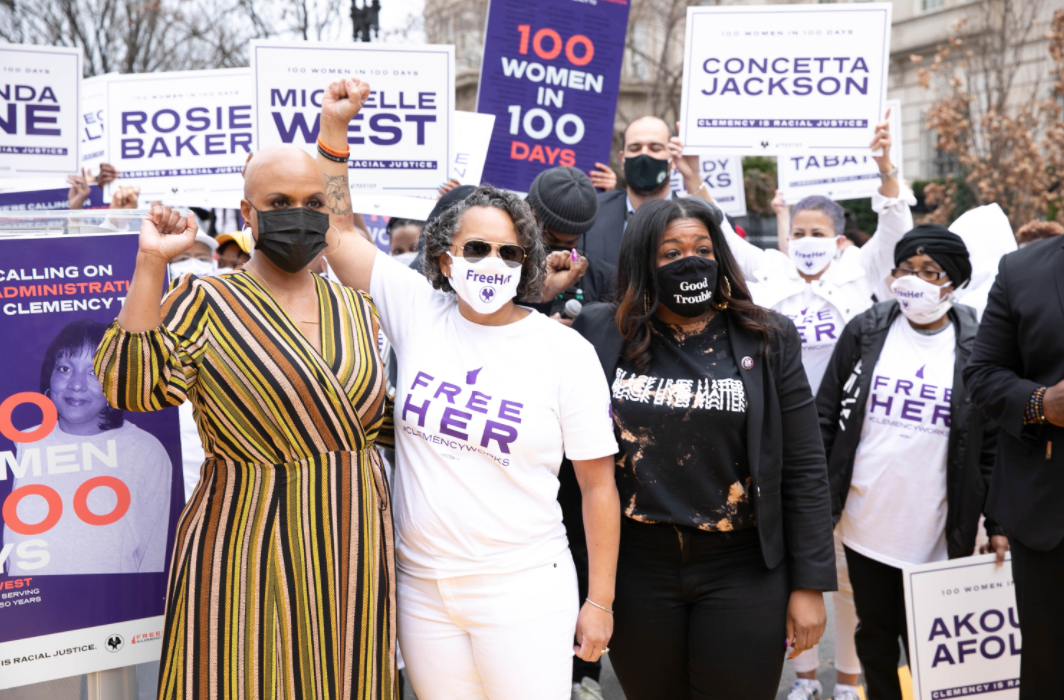 The statistics around Black women and girls and incarceration are staggering. The National Council for Incarcerated and Formerly Incarcerated Women and Girls is an organization founded by Andrea James that “works at both state and federal levels to end incarceration of women and girls.” James is a former criminal defense attorney who was incarcerated for 23 months. After this experience, she was inspired to partner with other Black women affected by the system to change it. BGN spoke with her daughter, organizer Sashi James, about this important organization.

Why was your mother inspired to create this organization?

When my mom went to prison in Danbury, Connecticut, in 2010, she was also a lawyer. So, she got to experience the other side of what it’s like being incarcerated. She and a few sisters organized themselves in the prison yard. They figured out there was about 100 years’ worth of sentences sitting together at that table. Prison had only caused further harm to them. When they came out of  prison, they realized that they were not free until all their sisters were free, and they had a mission to end incarceration of women and girls. So they started an organization called Families for Justice As Healing – Ending Incarceration of Women and Girls in Boston. That local organization is kind of the mother of the National Council.

On the federal level, Biden granting clemency to 100 women in the first 100 days. Right now that is our major push — bringing our sisters home and advocating for clemency because clemency is racial justice.

Granting mercy to women who have received harsh sentences. Clemency criteria is also for women who are elderly, who have served 10 years or longer, and who are sick and terminally ill.  It’s over 231,000 women incarcerated in the United States right now, and a lot of those women have children. Clemency would serve as an immediate remedy. So basically if you’re elderly, if you’ve been in prison for a long time, you would be forgiven for whatever transgression you’re in prison for. Just even thinking about how the system literally takes newborn babies away from their mothers and then sentences mothers to life sentences, the fact that Black and Brown communities are more disproportionately incarcerated than any other community, you know, it shows that not only do you not care about Black mothers, you don’t care about our children either. Clemency is saying we understand that you’ve served your time and today you’re moving forward to be reunited with your family. It’s a kind of forgiveness from the president, from the government, from the system. It’s just saying that we’re acknowledging that you’re moving forward with your life. All it takes is a single stroke of a pen.

What are the biggest challenges your organization faces?

What solutions are needed to solve the problems you face?

Having people in the neighborhood run for office and be elected. Then, when they make state budgets that include our community, be sure that they talk to the community about what we need. Right now, people who are really not a part of our community are making decisions for our community, without us being on the forefront. We’re the ones who are impacted by budgets. We’re always trying to figure out like, why do we only have one treatment center in a 50-block radius when we have so much harm, hurt, pain, and substance use going on? And mental health issues, but we only have one mental health center? Where’s the money going for mental health centers? Where’s the money going for substance use? It’s really important that we elect our people and our people vote for our people, so that way we can have advocates for our communities.

How can our readers support your organization?

They can support and sign our #ClemencyWorks for COVID-19 color of change petition #ClemencyWorks for COVID-19 | ColorOfChange.org, make donations to support us on our website The National Council. And watch, like, and share our new YouTube video, The National Council: 100 Women Say Their Names Video, which shares the compelling stories of some of our sisters.

As you work as an abolitionist, what’s bringing you the most joy?

Educating the community. We have Reimagining Communities, which is the infrastructure that we’re working on as we’re fighting to stop incarceration of women and girls, that also looks like women and girls not being incarcerated period. And creating alternatives or figuring out what communities need resources, where do those resources need to go, what’s causing community members to repeat transgressions, and what is the foundation of all those transgressions. So, Reimagining Communities is a joy. It’s really the baby of the National Council and in particular for me, I really enjoy it. I like to say that I’m literally a product of Reimagining Communities because I’m one of the children of the National Council. The sisters who were in prison in Danbury, they all came home and they wrapped their arms around me lovingly and just fought for me, day in and day out. They taught me what “different” looks like. It’s my duty to always go back into my neighborhood and reach out to my community members and my peers saying, “Hey this is what this looks like,” and trying to learn what people’s budget is or what participatory defense is and how to transform harm and how do we respond to things without calling the police. Just getting to the root of the trauma and the harm and the hurt and the pain and suffering that our communities are feeling that nobody is addressing. When we had a listening tour, one of the one of the most common topics that came up was, when women are sentenced to prison, nobody asks them, “What did you need, to not be here?” At Reimagining Communities, that’s our first question. What do you need to not land yourself in prison, or causing further harm to somebody else, or not harming yourself? Our joy right now is Reimagining Communities and just trying to grant clemency. It’s been a long fight.

Alfre Woodard On Getting Indigenous Culture Right in ‘Juanita’