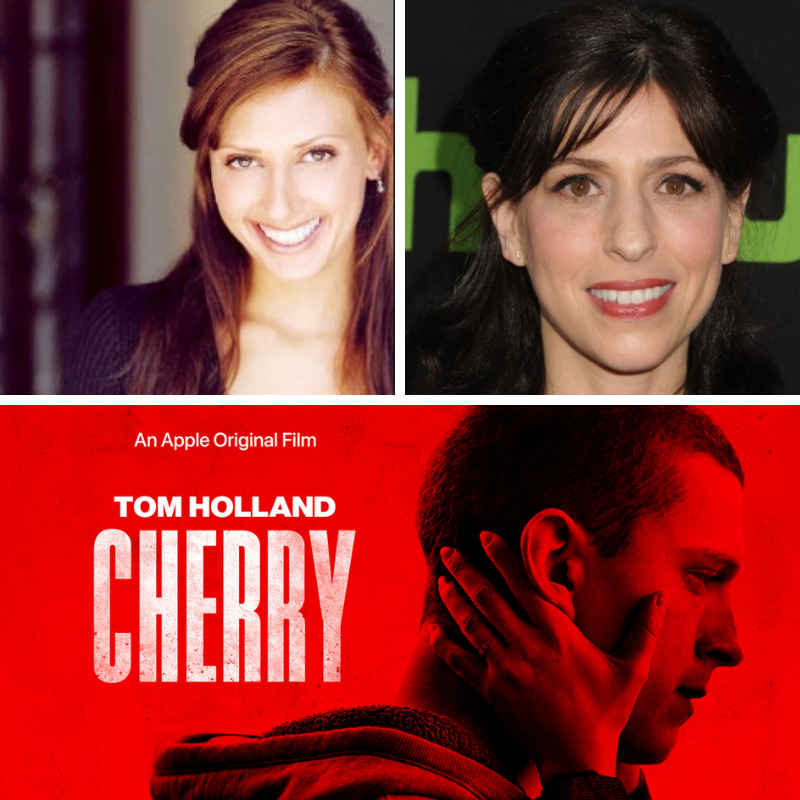 The highly anticipated Apple TV+ film Cherry stars Spider-Man’s Tom Holland as a college dropout who serves as a medic in Iraq and ends up an opioid-addicted bank robber when his tour is over. BGN sat down on zoom to chat with the award-winning co-writers of the screenplay, Jessica Goldberg and Angela Russo-Otstot.

Was this your first time co-writing a script?

Goldberg: We’ve worked together on another adaptation of a book. Angela’s a producer, but that relationship is almost like writing together so we definitely had that language when we started this project.

You have a great synergy together.

Russo-Otstot: I love working with Jess.

Russo-Otstot: And also being from television, I think we both really enjoy working with collaborators so it’s great to have a wing woman here, a partner…a friend.

Cherry was inspired by the novel written by Nico Walker. What was your process for converting the book into a screenplay, and how long did it take to complete the process?

Goldberg: The book is very poetic, very lyrical, very brutal. So for us, the first thing to figure out was how do we tell a story in two hours that’s satisfying and keeps you emotionally connected to this character who can sometimes be intense. Early on we decided to focus on a love story as the frame of the movie. So that was how we began.

Russo-Otstot: Once we identified that architecture and found a way to build a narrative that felt propulsive, we went back into the book and started pulling the details. It was almost like a series of science experiments. We were trying to find bits and pieces of certain characters that would work well in the context of another identified character, pulling different insights that the narrator had, and giving them to Cherry in the film but perhaps in a different moment that we had pulled from the book. So that was a really fun process. It took quite a while because we had to go back and check to make sure of our seeding and threading. Jess called it, “the math of writing.” We really wanted to honor the spirit of the book.

The film is called Cherry and uses color in creative ways. Along those lines, I noticed that in this working-class white-centered story, the majority of people in the film who represented systems, the bank tellers, the drill instructors, the date Cherry’s girlfriend Emily brought to the restaurant where he worked to make him jealous, were all played by Black and Brown actors.  Did you plan the ethnicities of the characters when writing the screenplay or did that just organically happen in casting?

With the working-class background in the film it really landed on me that a lot of the systems that were negatively affecting Cherry, particularly in the basic training scenes (the drill instructors), set some negative patterns of what a lot of white men in middle America seem to be going through. Was that inherently woven through the book?

Russo-Otstot: The drill instructors honestly, were actors, and some of them had experience in the military, which is part of the reason they came to those specific roles. They were incredibly informative in terms of allowing us to maintain a level of authenticity that we wanted. But also they were committed to the level of absurdism that the character Cherry was noting, about the entire process of basic training. But that is indicative of individuals who live in Cleveland and enlisted in the Army.

Goldberg: A lot of that casting was local.

Russo-Otstot: But the Benji character, that was from the book. Benji, being from Ghana, Emily’s date that she brought to the restaurant where Cherry was working. Cleveland’s an interesting city, because there’s a high ethnic population. There are many Eastern Europeans, but you have very pocketed neighborhoods that exist to this day. So there’s an interesting intersection of socioeconomic and cultural backgrounds.

I’m familiar with Cleveland. As I was watching the film it felt like Cleveland and the casting was spot on, which allowed me to believe in the characters and feel empathy for Cherry through the complex relationships to power. I love that two women wrote this film, two men directed this film, it’s a family affair, and at the heart of it all is a love story. Angela told this story with her brothers. Jessica, how does it feel to come along and be a part of this creative family?

Goldberg: It was really fun to be a Russo for a year. I’d do it any time. I think it’s like what you said about Cleveland. The first thing that we did was fly together to Cleveland. I do think part of what attracted the Russos to the book was the story that was so deeply personal of a place that got ravaged by an economic downturn and then it really got hit hard by the opioid problem. At this point, it’s hard to find an American who hasn’t been touched by addiction. We all felt that connection really strongly. But the thing that was so beautiful for me was that the Russo family is so creative and so open hearted. I’ve never really had this experience of writing. We’d sit down and we’d all read it together like we were doing a play. I came from writing plays, so that was just amazing and so exciting. We were encouraged to be brave, to take chances, to experiment and inspire each other. That was very cool.

Cherry has a pattern of self medicating and his family is absent. Where are they?

Goldberg: That’s one of the things I loved about the book, is that it’s a world that’s devoid of parental figures or mentors. It’s a post-9/11 generation book in a way. I think that’s how a lot of young people felt at that time. Both Cherry and Emily grow up in a world where they don’t seem to have anyone. So how do they make choices? That really interested me.

Russo-Otstot: I always imagined the absence of the parents is more indicative of the way they feel rather than the actuality of their circumstances. I doubt that Cherry has a close relationship with his parents. They’re present in some way, but they’re never present when he’s struggling. The only time we meet Emily’s parents is during a very tragic moment. For half of the movie, viewers aren’t aware of parental love.

The material is relatable to so many working class folks out there who deal with economic insecurity and make life changing choices like joining the military due to the inequality that’s prominent in America today.  How important was it for you to find the humor threaded through this story?

Goldberg: The movie would have been hard without humor I think. I mean, it’s a hard story.

Russo-Otstot: To outsiders, Cleveland is considered to be a dead end, and many who live there may feel almost as if they’re trapped. I say that as someone who has experienced it. You have to find a way to acknowledge the absurdism that’s surrounding you. There’s a dark humor that’s very prevalent in Cleveland. Yes, humor is vital for Cherry’s survival.