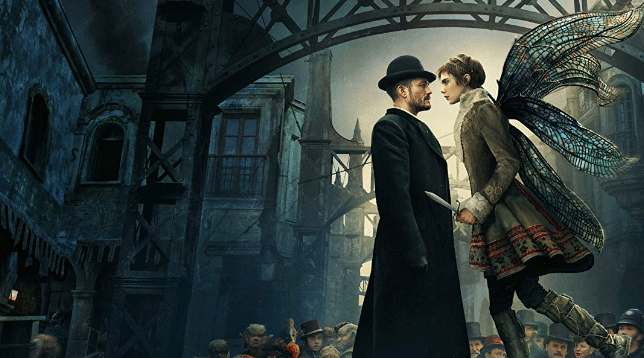 The series Carnival Row stars Orlando Bloom and Cara Delevingne. The show is set in a Victorian fantasy world filled with an assortment of mythological creatures. Portrayed as immigrants, the creatures have left their exotic homelands due to invasions by humans. The rules are strict and the creatures are forbidden to live and love freely. But, not all humans are bad. Orlando plays Detective Rycroft Philostrate who has a dangerous affair with Vignette Stonemoss, a refugee faerie played by Cara. A string of gruesome murders threatens the peace at The Row. Philostrate works the case while Vignette hides a secret that endangers the human world. 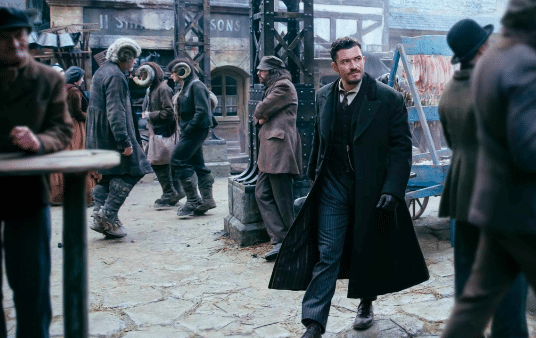 The show also stars Simon McBurney as Runyan Millworthy, an eccentric traveling showman, David Gyasi as Agreus, a mysteriously wealthy faun who defies social order by moving into an affluent human neighborhood, Tamzin Merchant as Imogen Spurnrose, a young woman looking to turn her family’s fortune around, Andrew Gower as Ezra Spurnrose, a neurotic son who has gambled his father’s fortune away, Karla Crome as Tourmaline, a quick-witted faerie poet driven from her war-torn land, Caroline Ford as Sophie Longerbane, a clever and mysterious young noblewoman, Indira Varma as Piety Breakspear, the regal and cunning matriarch of the family that rules the city of The Burgue, and Jared Harris as Absalom Breakspear, the imperious and secretive Chancellor of The Burgue.

During today’s press conference for Carnival Row, the panel mostly focused on three things: themes, attention to detail, and the personalities they are excited for audiences to see on screen. In attendance was Orlando Bloom, Tamzin Merchant, David Gyasi, writer Travis Beacham, and writer Marc Guggenheim. As we got started, the conversation immediately focused on some of the more timely themes of the show. The show itself is socially relevant, tying in themes of immigration and racism. “The show wrestles with the issues of time, telling the story of the struggles that people are going through, and gives it a human perspective,” says Bloom. One of the things television allows people to do is look at things and discuss those issues. Beacham had a lot to say on the subject — being one of the main writers of the series.

“I think a lot of the problems that we have as a society stem from the fact that we don’t talk to each other anymore. It’s considered rude to discuss politics. As a result, we all have placed ourselves in these bubbles. And the nice thing about art is it can maybe, hopefully, jumpstart some of those conversations. And, having those conversations is ultimately healthy for our society”, added Travis Beacham.

“Storytelling is an act of empathy,” says Guggenheim.

Visually, this show looks amazing with different species and magical creatures flooding the setting of a Victorian-era town. What came up in the discussion was the idea of the attention to detail that the show impresses upon the viewer. “The first time I got excited was when I walked down the Row,” says Bloom, “I was overjoyed to walk down Carnival Row and see the level of detail. It was cool because I don’t think I’ve ever seen this before; jars with animals that have been combined, the potions. I geek out over detail.” It’s a very immersive experience from what the teasers and cast would suggest. It’s big, diverse, and expansive.

Merchant was all about being able to showcase a version of a character that is the opposite of herself. Merchant described her character Imogen as someone who is a bit of a ball buster. “The female characters that we have on the show are all amazing. They are really complex characters and filmed beautifully. Very complex, multifaceted female characters. That’s a treat for me to play,” she says.

Bloom had a different take on his character, Detective Rycroft. “In reality, I wear my heart on my sleeve. It’s nice to embrace that masculinity that’s well balanced with a feminine quality. A quality of openness and empathy,” he states. Gyasi had an interesting perspective where he questions his character’s actions, genuinely wanting to understand how a person does what they do. “I’m interested in hierarchy or class,” he states. “ My character buys the biggest house in the richest area with cash.” It is worth noting that Gyasi’s character is a faun living in a human neighborhood. “How does someone do that,” he exclaims, “and then survive and make a success.”

We as the audience get to go on the journey with these characters. It should be a fun ride. A show with faeries, magical creatures, forbidden love, detective sleuthing, and timely themes seems like a show we should all get behind. Looking forward to another Orlando Bloom show to add to the collection.