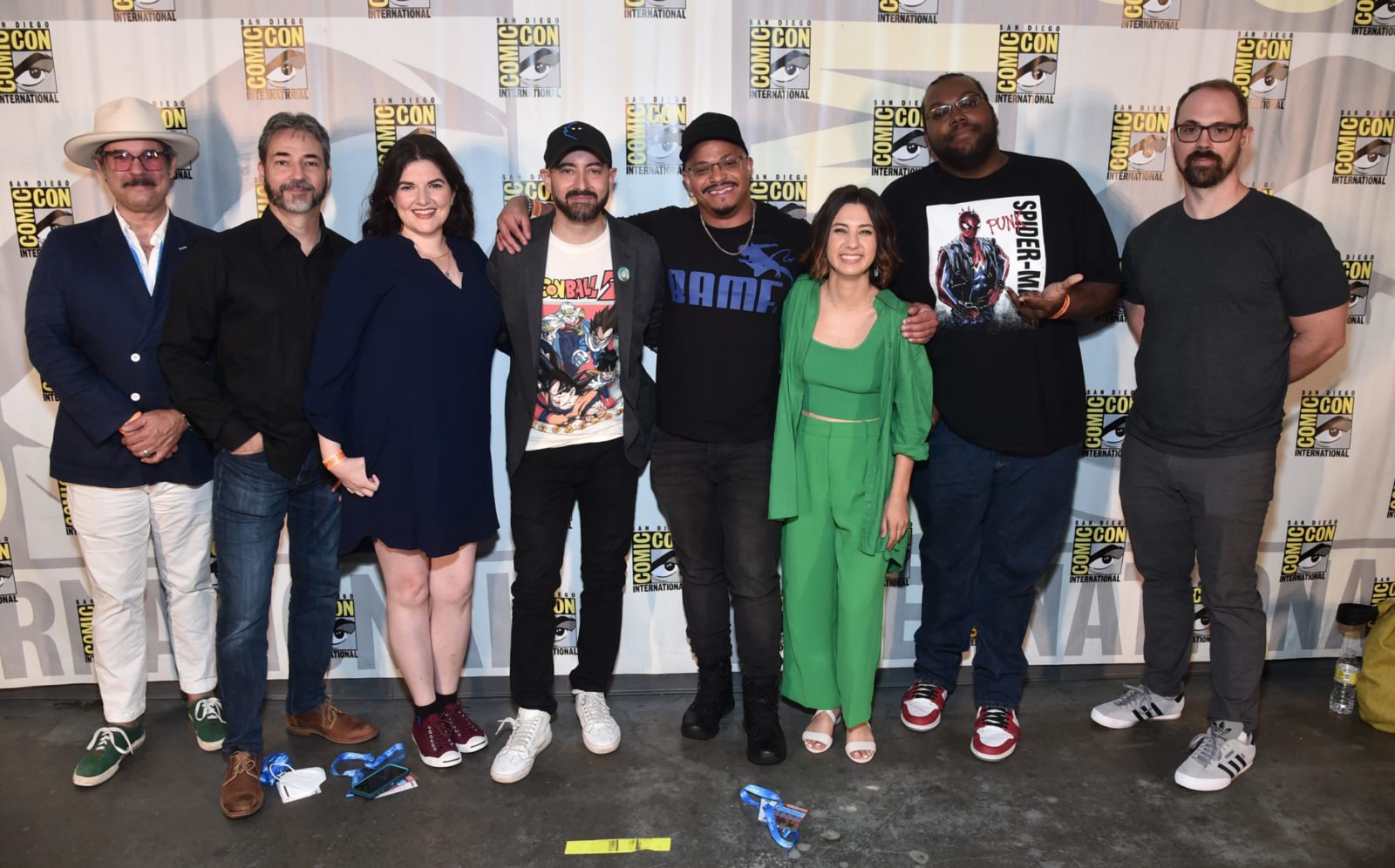 The lights dropped and Ballroom 20 of the convention center was pitch black as the notorious voice of the Watcher (Jeffrey Wright) began narrating the What If…? episode introduction. Suddenly, audiences were transported into the world of everything Marvel animation.

Black Girl Nerds got an exclusive look at the latest projects that the studio has in store — and that includes some multiverse-shattering Marvel animation updates.

One of the gems that Marvel shared was an episode of the upcoming Disney+ series I Am Groot, featuring everyone’s favorite powerful dancing tree taking a bath that goes somewhat awry. They also dropped the official trailer for the series and dished that in addition to the episodes releasing on August 10, the creators are developing five more episodes.

Creators Bryn Andrew and AC Bradley revealed the Season 2 trailer for Emmy-nominated series What If…? and shared that there will be a Season 3.

Bryan Andrews invited panel attendees to delve into the upcoming Marvel Zombies series and some of the zombie characters that they can expect to see, including: Hawkeye, Captain America, Abomination, Ghost, Captain Marvel, Scarlet Witch, Okoye, and more.

Some of the non-zombie team members include: Kate Bishop, Red Guardian, Death Dealer, Shang Chi, Jimmy Wu, a skrull biker gang, a team of Black Widows and Ms. Marvel (panelists teased that Ms. Marvel, Kamala Khan, will be a major player in the series). There will be even more comic book characters on the roster as well.

There was also some exciting concept art from Spiderman: Freshman Year, created by Jeff Trammell. He presented the cast of characters, and Ryan Meinerding provided the audience with a first-look at the new Spiderman suit for the series. Trammell explained that the suit reflects an early Spider-Man Peter Parker that was his own DIY costume. The suit itself is a blend of casual and techy. The image showed the teen in tennis shoes and a backpack paired with high tech accessories, most likely crafted by Peter himself.

They also shared some of the characters that fans can expect to see, including: Peter’s friend Nico Minoru, Lonnie Lincoln, Dr. Strange, Daredevil (who will be voiced by Charlie Cox), Unicorn, Chameleon, and more.

It was also announced that there will be a Season 2 entitled: Spiderman: Sophomore Year. This will be Marvel’s first animated Spiderman series under Disney.

Finally, fans were treated to a first peak at X-Men ‘97, which included a sizzle reel with the cast and creators from the original 1990’s animated show. Executive producer and head writer Beau DeMayo revealed an animatic AC piece that showed off an early concept rendition of an action sequence with the original X-Men theme music playing in the background. Winderbaum also shared that the series is already confirmed for a Season 2.

He recommends that followers of the show rewatch the classic episodes to prepare for the new season, as they will have some connections.

Without a doubt, each creative was glowing with pride as they spilled the tea on their upcoming Marvel projects.

Winderbaum reflected on how watching cartoons when he was growing up made animation hold a special place in his heart. For him, animation always seemed like the “logical” approach to creating a series with such a large number of Marvel characters and their multiversal dimensions.

However, Winderbaum noted that this mission would be impossible without the help of the entire visual development department that designs characters, looks, and the feel of film, animation, and live action projects.

Another key player that Tompkins introduced is Ryan Meinerding, who received a video homage noting everything he does to ensure Marvel projects look exceptional. Meinerding draws from comic book styles, develops concepts, magic, fire, and other unique visuals. A Marvel project veteran, Meinerding told fans that the process for live-action and animation visuals aren’t much different.

Speaking to the connection between animation and live-action, Lepore explained that I Am Groot will take viewers along for Groot’s coming of age days. His childhood will be similar to many other kids: he’ll get in trouble, experience things for the first time, and even experience some bathtime woes. However, it will also embrace the unusual and special experience that it is to be Groot. Still voiced by Vin Diesel in the Disney+ series, Groot will reflect the same charming character from the Guardians of the Galaxy movies fans know and love.

When asked if there will be any specific easter eggs from the Guardians of the Galaxy, Lepore dodged providing answers. It would seem that audiences are going to have to stay tuned.