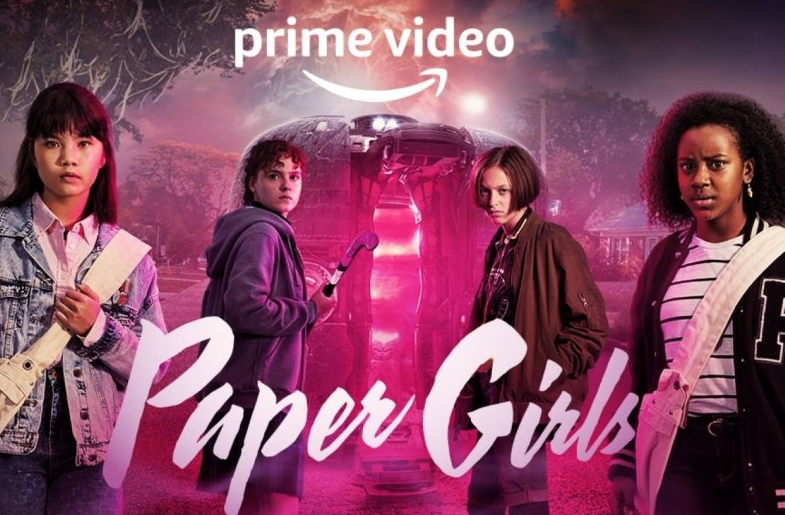 Paper Girls is one of the latest upcoming comic book based dramas headed to Prime Video. Based on Brian K. Vaughan and Cliff Chiang’s critically acclaimed comic book series of the same name, which has six volumes in total, Paper Girls will explore the idea of time travel, aliens, and friendship. Prime Video will release all eight episodes at once on their streaming platform on Friday, July 29, 2022, at midnight (PT).

Created by Stephany Folsom (Toy Story 4), Paper Girls is set in 1988 and follows a group of new friends, four 12-year-old girls, who meet the morning after Halloween while conducting their paper route. The shift is Erin Tieng’s first as a paper girl, and she meets Tiffany Quilkin, Mac Coyle, and KJ Brandman.

The quartet are soon unexpectedly thrust into a time war between two alien factions. Their encounter with the group leads them to travel through time in order to save the world. The film stars Camryn Jones as Tiffany, Riley Lai Nelet as Erin, Sofia Rosinsky as Mac, and Fina Strazza as KJ. The film also features Adina Porter (American Horror Story), Nate Corddry (For All Mankind), Ali Wong (Always Be My Maybe), Delia Cunningham, and Sekai Abenì.

The Comic-Con 2022 panel was moderated by Yvette Nicole Brown (Community), and had Paper Girls’ comic-book writer Brian K. Vaughan, Paper Girls’ illustrator Cliff Chiang, co-executive producer Chris Rogers, and castmates Camryn, Riley, Sofia, Fina, Nate, and Adina. The group blessed Comic Con 2022 fans with the official trailer and four clips from the series that features Adina as Prioress torturing a man for information, Ali as adult Erin finding her younger self in her house, the paper girls first meet up, and giant robots.

Here’s some of the takeaways from the Paper Girls panel this year.

Origins of the Paper Girls comics…

Brian K. Vaughan: I grew up in Cleveland, Ohio, as a kid. There was one summer where the paper boys who delivered our papers were suddenly and mysteriously replaced by paper girls. I just thought it was so cool that there were these badass 12-year-old children who were allowed to go out at four in the morning to deliver bad news to grownups. It was so interesting because they were sort of the first of their kind and also the last of a dying breed. I always thought they’d be an interesting protagonist for a story. Yeah, it’s been thrilling so far.

Vaughan: We have two groups. There’s one that’s very passionate about the times and how they change. Whatever happens is meant to happen. But, there’s another group that says, “No, screw that. We have the capability to go back and make something better if we can.” So there’s not really good guys or bad guys. They’re just different perspectives. These girls find themselves caught in between this incredibly complex conflict.

Adapting for the screen…

Chris Rogers: The first thing is, don’t blow it. It’s Paper Girls. It’s so beloved and rightfully so. I don’t think you do an adaptation unless you think there’s deeper to go in. Paper Girls has to happen necessarily in comic form for a couple of things very quickly. I think there are seemingly moments in life that we felt like with a TV show we could sit down and go over in eight hours. I think everything that I love about the comics are there, but hopefully we will surprise you with some new amazing moments as well.

Riley Lai Nelet: We met very similar to how our characters did on screen. We had been told not to meet prior to being on set. So, when we met for the first time it was a really special moment. We were like, “Hi!” and it just kind of clicked in. We became quick friends, and it feels as if the characters got to know each other while we being the actors did as well.

Camryn Jones: We bonded over ice cream a lot because every weekend we would go out to get ice cream for every major or minor celebration, just because we wanted to hang out. Then when we were on location, on the farm, our producer bought us laser tag, and we played laser tag on the second floor of this hotel. Nobody was there, but we were worried we’re going to get kicked out because we were yelling and flipping and running through the hallways. But I feel like all those little experiences together really helped us bond and our characters’ friendship grow.

Not about glorifying the ’80s…

Fina Strazza: The entirety of the ’80s are shown really hard. We really made sure not to glorify it because the ’80s was not the best for a lot of people. I’ve definitely been aware of that my whole life. My mom has told me that her teachers would say in her health class that HIV and AIDS were God’s way of “cleaning house.” It’s still prevalent today. Even watching Disney shows, the homophobia that circulates in television and movies and just clearly the pop culture of the time, it’s very apparent. With KJ’s story, I know that her arc is very important to a lot of people. I wanted to make sure that I approached it very delicately and made sure it was told truthfully and authentically.

We look forward to seeing these young ladies in action. Paper Girls will be available Friday, July 29, 2022, on Prime Video.