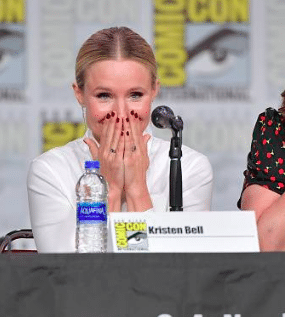 For the Ballroom 20 panel of Veronica Mars, audience members were shown the first episode of the new season coming to Hulu.

Happy Birthday, Kristen. It was announced that Hulu released all 8 episodes today, a week early for fans.  What’s still apparent after 3 seasons and a movie, the laughs are still there. Kristen is still the perfect embodiment of Veronica Mars and it’s hard to tell where the two separate. As Veronica and the gang embrace 2019, one of the standouts of this new season is the writing. Tailored to the ever-growing social media language and millennial presence — Veronica Mars shows us that there is still a place for Mars Investigation. 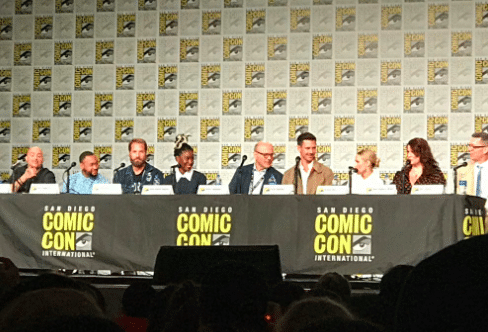 Some of the things that made Veronica Mars back in the early 2000s so special are still there. The father-daughter duo is still the best thing about this show. We need more of it. Veronica, Keith and the daddy-daughter duo that makes sense and they continue to riff off each other with the best comedic timing. Seeing Veronica and Logan together again on-screen was like no time had passed. The introduction to Logan in this first episode of season 4 is something out of a Bond film. Little swim trunks included.

I almost forgot how adult content this show is. But at the same time how awesome it was to have a girl like Veronica to watch on screen? When asked what age was appropriate for Kristen’s kids to watch the show, 13 seemed to be the general consensus.

The relationship drama, the crazy cases, the attractive men, and the wiity banter which gave the series its unique flair still remain.

After the premiere of the first episode, there was a panel discussion and star Kristen Bell said we are only here because you guys kept watching. 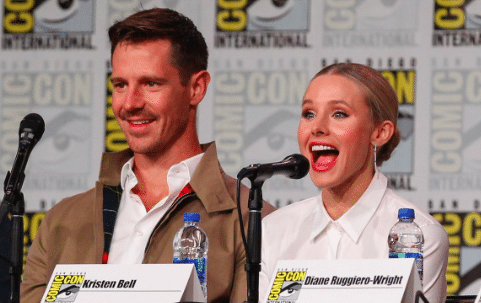 “Veronica like anyone else has commitment issues. She has inner turbulence. She hasn’t had a good example of a marriage. It is perfect now, so she doesn’t want to ruin it”, says Bell.

Rob Thomas adds, “Veronica said I’m never getting married sn one of her first lines. It is so comfortable, it is so easy to do. I got to show up for the first scene between Keith and Veronica in the office. Having rebuilt the Mars Investigations office to look exactly like it had and watch Kristen and Rico perform that scene is about as happy as I’ve ever been this past year. They take mediocre material and make it palatable. It is really fantastic.”

Newcomer Kirby Howell-Baptiste adds her sentiments, “Everyone has welcomed me with open arms. It felt like going to meet your boyfriends family.”

Kristen also shared what it was like working with Kirby, “I was beyond thrilled. She is so spectacular in every scene on camera and especially off-camera.

Percy Daggs III says, “The relationship with Wallace and Veronica are besties who don’t need to do too much. We come in and talk on twitter and play with the baby for a bit. Seeing Wallace as a teacher is one of those teachers who gives his whole heart. Happy to see him as the family man I would expect him to be.”

When Francis Capra was asked if Weevil was in love with Veronica Mars he adds:

“Early in the show, I would try to distance myself from who Weevil is. Each time we came back the show meant more and more to me. How I feel about Kristen in real life is how I feal about Veronica on the show. Of course, Weevil loves Veronica. You know how many times she has got him out of jail?”

It’s fair to say everyone loves Kristen and Veronica. Kristen wants to play Veronica until everyone in Neptune is dead.

Kristen also elaborated on Pony, “Rocco is cast in the part as Pony. He’s the most wonderful dog I’ve ever met. As a wrap gift he got me a pillow of his face. I got socks with his face on it.”

When Kristen was asked the fun question fu*k, marry, kill her choices were:

Kristen Bell also wanted to bring Veronica back for young daughters. When asked how has the role of being mommy influenced Veronica, here’s what she had to say:

“This show is a beast to shoot. I was hesitant to come back to Veronica. If I’m going to miss 6 months of bedtime stories to bring this character back to the screen it better be worth it. I’m so grateful to the writing team to write a woman like this. Being a mother has changed the way I view characters. I am a little more sympathetic to my characters.”

Director Rob Tomas binged Veronica Mars with his 13-year-old daughter. “It was great. It felt like I had written a how for my 13-year-old daughter. There will be fun people from our past, Max Greenfield, Ryan Devlin (Mercer Hayes), James Jordan (Tim Foyle and the janitor), Adam Rose, Cam Marino, and Darren Norris.

Hulu just launched all 8 episodes of Veronica Mars a week early and is now available for streaming.