When Cut Throat City was announced that RZA, better known from the Wu-Tang Clan, would be directing a movie about a heist set in New Orleans during Hurricane Katrina my first reaction was, why? Then, I got a chance to chat with some of the younger cast members at SDCC and it all became clear. I immediately wanted to see this movie in theaters. The look at the Black excellence surrounding the film is enough to get you to pay little mind to the fact that it’s another heist movie. Cut Throat City is directed by RZA and stars Wesley Snipes, Terrence Howard, Kat Graham, Demetrius Shipp Jr., T.I., Denzel Whitaker, Shameik Moore, and Rob Morgan.

During a roundtable discussion with Demetrius Shipp Jr., Denzel Whitaker, Keean Johnson, and Tyron Woodley, the group spoke about the film and what it was like filming this movie. It was clear this film made an impact on them for the better.

According to Johnson, Cut Throat City is “about four kids right after Hurricane Katrina. They’re seeing the whole city of New Orleans being built around them. They’re seeing the 9th ward, the only place being neglected, and the only place not being treated well and the only place not receiving any money. You start to see these young kids needing to make money for themselves and choosing a route they wouldn’t have to go otherwise, and they start robbing casinos for themselves.” 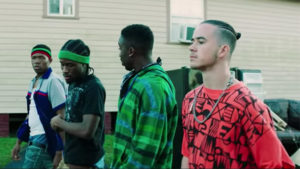 Right away, this seems like a different type of heist movie. It seems like we will be seeing the usual suspects of intense scenes, careful planning, and audacious crimes committed, with an eventual pursuance of justice in the end. But, it sounds like we will also be getting a heist drama with storylines and characters that will surprise and shock us. It sounds like we will be forced to face our own injustices and made to question our own morals.

The group also talked about how the robbing casinos was more metaphorical than anything else. “There’s a line in the film, that the first things being built after Hurricane Katrina was the casinos. Harrah’s was up right away and then the places that really mattered weren’t ever looked at. So it was us, kind of, sticking it to the man.” If anything, this film sounds like it will give us vivid insight into the social status, character, and values that define the changing environment. This film couldn’t be more relevant. It’s the gritty reality of the world and how it works rather than greed that makes this heist film stand out.

The heist genre has been called an adaptation of the western or the modern gangster film. It’s true that some of the actors in this film are known for their gangster type roles, i.e. 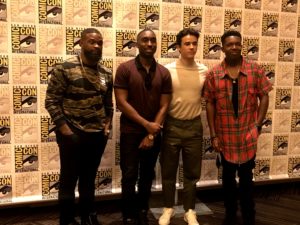 Terrence Howard, Wesley Snipes, and T.I., but according to the young generation, it’s so much more than that.

“I think it’s the characters that are telling the story that make it very different,” says Whitaker.

“It’s a relatable story. There’s something that actually causes it. It’s an American historical event that happened that led us,” says Shipp Jr.

“Also, the story isn’t about a bunch of thugs who get together and decide to go on heists. It’s about a group of young kids who’ve grown up together and don’t know what else to do,” says Johnson.

There is a line from the trailer, “We were underwater before Katrina”, that rings true for so many people living in New Orleans. The cast was very open to learning about it. Shifting away from the martial arts stories, RZA wanted to incorporate real people, real lives from the 9th ward, and he did. It was his goal to nail the aesthetic.

As Woodley put it, “nobody did a film about the catastrophe. Nobody really touched on it. That was a long time ago, so this is going to be the first time that somebody didn’t just go and participate in this huge tax incentive. They actually showed tribute and respect, and really told the story the way it should be.”

The film looks exciting and these guys feel truly passionate about the project. The official teaser trailer shows a glimpse as to why. The cast is talented, and the story looks exciting. It’s a new take on the heists films that I think I will enjoy.

Tyrese Gibson and Terrence Howard Star in ‘The System’