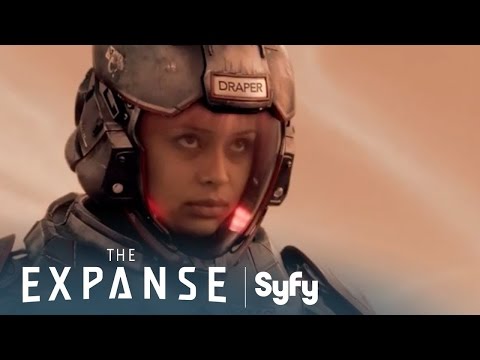 Recently, I was fortunate enough to watch the first four episodes of the Syfy Network’s second season of The Expanse. I’m a huge fan of Season One and even wrote about it for Black Girl Nerds back at the beginning of 2016. So, when Season Two came up for a critical review, I was as amped as a Martian Terraformer to once again be able to follow the story of James Holden and his crew of Belters and Martians.

In case you aren’t familiar with this masterpiece of space fiction, The Expanse is based on the novels written by James S.A. Corey (pen name of authors Daniel Abraham and Ty Franck) and takes place in a future defined by interplanetary politics, shady corporations, and socioeconomic hierarchies. In this future, the solar system is mined for ice, Mars has begun the slow process of terraforming, Earth is apprehensive of Mars’ growing military powers, and humans have physically evolved to live in the low gravity environments of asteroid belts (they’re called Belters).

While Season One of the Expanse was great, Season Two is fantastic! The acting is on point, the story is well executed, and the characters are rich and engaging. And on top of all this goodness, it shows us (people of color) existing in the future. In all of my years as a connoisseur of science fiction, I have never seen a future that includes so many people of color (PoC). Though it might seem ridiculous to be so excited over something like diversity (it’s silly to have to remind folks that we exist), it’s excellent to see a cast made up of at least fifty percent PoC.  The first four episodes of the new season (there are thirteen in all) include actors of African, Iranian, Greek, Egyptian, Mexican, Thai, Ojibwe, Chinese, and Samoan descent.

Another great thing about Season Two of The Expanse is its use of women. I don’t want to give too much away, but the way the series handles its non-male characters is excellent. This is particularly the case of Shohreh Aghdashloo’s character. Her powerhouse portrayal of Chrisjen Avasarala as a political mastermind with the smarts to outthink the likes of Little Finger and Varys (GoT) is delightful. I love this character, and you should too, as it is rare that women, especially older women of color, are portrayed with such power, grace, and dignity in the genre. Even when Avasarala occasionally navigates shades of gray in her pursuit of truth, you can’t help but fall in love with her wit and intelligence.

The other women on the show are equally as engaging and meaningful to its narrative. They exist in the world of The Expanse as intelligent, complicated protagonists, and utilize their knowledge of space aeronautics (Naomi Nagata) and warfare (Martian Bobbie Draper) to fight for what they believe in. They, my friends, resist!

Resistance. With the incoming Orange Administration and its blatant attack on people of color, women’s rights, and environmental laws, resistance has become a rallying cry for many. So, it’s not surprising that certain elements of The Expanse explore the concept of resistance. In fact, there are so many analogies that could be made between the world of The Expanse and the present political climate that I could probably write a 500-page thesis on the topic. But I’ll save that for another day and only say that the show explores belief systems, prejudices, government oversight, resource acquisition, immigration, indigenous cultural values that aren’t respected or recognized, the idea of being a sellout, and what one should do if things in government have gone so sideways that one can’t afford to turn the other cheek in denial anymore. I’m not saying that The Expanse is a show that is somehow making commentary on a particular orange that has taken office. I’m just saying that resistance is an unyielding theme in the second season and is one that I appreciate.

Should you watch The Expanse? I would say, “Hell Yeah!,” and give it 4.5 stars out of 5. If you haven’t watched Season One of the series, I suggest you get to work before February 1st shows up. In the meantime, prepare yourself for some sweet science fiction magic, because that’s what The Expanse is. Pure. Gritty. Space. Magic.