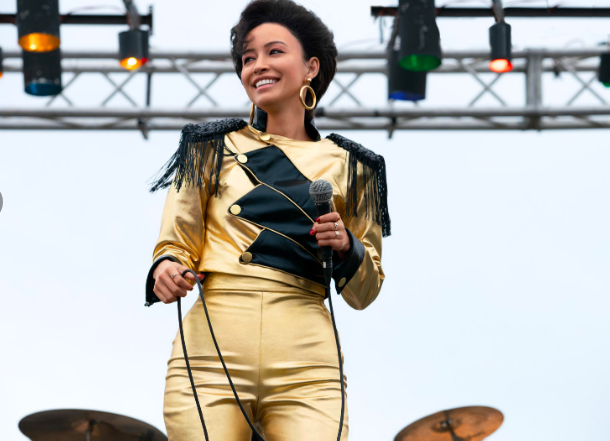 Selena y Los Dinos perform for a crowd at a restaurant that brings in a crowd of admirers, but Abraham thinks that they only did “fine.” On their way home, AB brings up money and how it will not be enough for the family to travel, new clothes, and to record a record. Abraham tells AB to figure something out or else the family won’t be able to eat. That is a lot of pressure on his children.

At high school, Selena is invited to Amarillo for a Hands Across America event for the weekend. Selena knows that her parents would never allow her to stay somewhere overnight because of band practice and stuff. Back home, Suzette is watching a show with Johnny Canales (Luis Bordonada), which the band was featured on but was made fun of for not being able to speak Spanish well. The family’s van is struggling to start. Marcella tries to help, but Abraham would rather take a loan than take from his own savings.

The band has a new guitarist, Roger (Paul Rodriguez), whom Abraham grills upon meeting. Suzette goes to get Selena for practice and catches the girl practicing to kiss on her hands. Abraham gets on AB about getting them a keyboardist, which AB states that he will get. Selena brings up singing upbeat songs, but Abraham smashes the idea because they are a Tejano band and he is trying to get them a record deal with Manny Guerra, who will be at the San Antonio Tejano Music Awards. He gives them a talk about not standing around for what they want — they have to go get it.

Teachers are concerned that Selena is not at school for a good portion of the week, which upsets Abraham to the point that he decides to pull Selena out of school, even though she is making good grades. I get the teacher’s concern for a teenager that is in a band working, rather than at school. The girl is only 15 by the way.

Abraham is not impressed with the songs that Luis Silva gave them, but AB doesn’t care. He is just happy to have them. Selena brings up going to Hands Across America, but Abraham shuts that down, stating her commitment is to the band. Yikes. Can’t girls just have fun? AB is informed by Silva’s secretary that the songs that were sent are not for their band, which means that they can’t use them. The family is upset by the news.

Selena talks to AB about how she understands what he is feeling but she also feels a spark when she’s on stage with her family. Abraham goes to ask AB what he is moping about. AB is upset about how he let the family down, doesn’t have a job, no money, or a life. Abraham inspires AB to write a song for the band instead, letting him know that he is capable of writing a hit song for them.

AB goes out to a bar and watches a band play. It inspires him to listen to each instrument and how they play, as their father taught them years ago. He writes a song and recruits Ricky Vela (Hunter Reese Peña), a keyboardist, to help with lyrics. Selena states that she can help with their look and lyrics, which Ricky points out is possible. The group record a song, “Dame Un Beso.” They go on to play this song for crowds of people, who enjoy it. It even gets play on the radio, which excites AB until Abraham points out that lots of bands have one hit. Marcella talks to Selena on her being a normal teenager, but Selena tells her not to worry, she’s enjoying what she does.

This episode really made me wonder if AB wanted to get into this life. Abraham puts a lot of pressure on him to make things happen, but I can’t help but wonder why Abraham couldn’t have done the work. AB is a young adult, and all he knows are the struggles of becoming a hit band. I don’t know, it just seems like they didn’t have a choice.