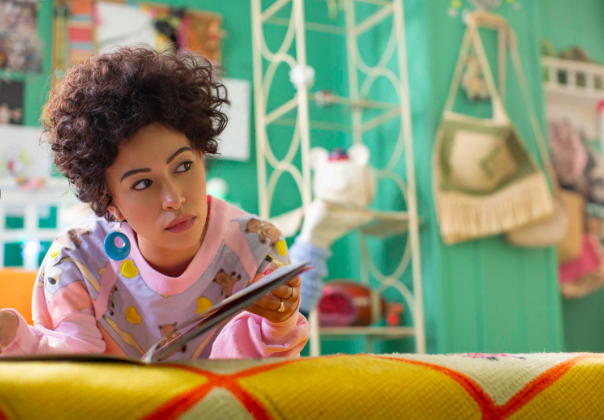 Corpus Christi 1988, Abraham surprises the family with a huge bus that is aptly named “Big Bertha.” A stranger pulls up taking pictures of the house and stating that they are interested in buying the house. Selena conspires with Suzette to go out to the movies so she can see her crush Jake but Abraham refuses. Abraham finds out that their house and several other properties are going on sale. While performing one night, AB catches the eye of a cute fan and Suzette notices. After the performance, Abraham catches AB talking to the fan, which is against his rules of mingling. AB clearly struggles with meeting people because he is always working. The band travels across the States in their bus that doesn’t provide heat or air conditioning. Suzette video records their time on the bus.

Abraham finally tells Marcella about the house situation, and she shuts down the idea of them living in their tour bus. He thinks that as long as they keep touring, they will be able to make ends meet. While in Idaho, they stop for the night to warm up, and Selena opens up about why she thinks they are here in the world.

Selena works on finishing her assignments, but Marcella is concerned about Selena losing her voice and insisting that she rest. The band finds out that the place they were to perform in Laredo has three bands against them. Abraham comes up with the idea for Selena to perform half a show and get an opening band for them. The band finds out that there is a lady’s night, which means fewer people at the club.

To push their performance, Abraham comes up with a meet and greet with Selena to take pics and sign autographs. With new clothes and red hair, Selena works the autograph table. Marcella points out that Abraham needs to be careful with how he speaks about Selena’s looks. Afterwards, Los Bad Boys, the local act, are setting up on stage and trying to impress Selena and the crew.

At the club, Selena y Los Dinos have a full house and are surprised that Los Bad Boys are bringing the house down. AB suggests that they continue to open for them until Selena gets better, but Abraham, forever the downer, thinks that they should worry about the opening act being better than them. AB is surprised by the same young fan from earlier. A man in a suit comes in and hands Abraham a CBS business card, so they can talk. Nice.

Back at Corpus Christi, aka home, AB goes out with the fan and her sister while Abraham makes moves to buy their house and both neighbors’ houses with a consolidated house loan. He makes moves before he called CBS? That’s a flex.

Quite honestly, I’m glad that AB is getting a social life. I hope that Suzette does, too. I say this as if I don’t know what happened with their lives already…