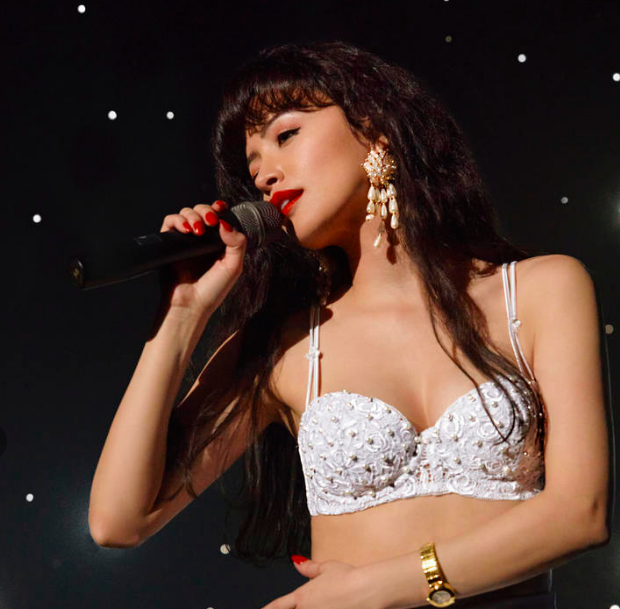 Big Bertha now has bunk beds, and the band has new roadies as well as new outfits for their different shows. Abraham gives the new roadies a talking to about the rules (insert eye roll here), and it just happens that the new guitarist, Chris Perez (Jesse Posey), arrives a few minutes late. Abraham isn’t impressed at all and doesn’t like him but instructs AB to clean him up at least. Just when Chris and Selena are flirting a bit, Marcella interrupts the moment. Abraham informs AB that Jose has called about the next album and wants three more demo songs, which means work for AB, who wants to enjoy it. But Marcella points out that Abraham doesn’t know how.

While on the road, Chris shaves his face and has to pull his hair back into a pony tail. Selena’s album seems to be flying off the shelves, and sparks are flying between her and Chris on stage. Suzette is not impressed. AB wakes everyone up early, thinking that he has a new song, but with everyone around, he’s got nothing. He really stayed up all night, stressed. We get a little more cuteness on the road between Chris and Selena as they bond over “more than words.”

Abraham happens upon the guys drinking and listening to music at night. He has a stern talk with AB who tries, and fails, to point out that the boys need to let off steam. Regardless of all this, Abraham tells him that the guys are on their time not their own. Also, AB needs a modern Spanish song ASAP. Better him not me.

Chris and Selena can’t stop duetting “More Than Words” while on the bus, thus annoying everyone. Pete and AB try to figure out a song while Selena, Chris, and Suzette drink a cup of hot cocoa and discuss Selena’s new moves. Selena states that she gets lonely on stage. Chris points out that she could always dance with Pete during the duets, but she shuts that down because she doesn’t think of Pete that way. Suzette points out that Pete is also in the band and that’s another reason not to be into him. I get what Suzette is trying to do, but sis needs to chill. Chris suggests back up dancers, which Selena loves. Pete comes up with an idea of using their English song and turning it into a Spanish song, which AB likes. AB comes up with a beat and the two get a song.

At the Tejano Music Awards, Selena performs “Enamorada De Ti” with a few back up dancers. She wins the entertainer of the year for the third time in a row. On their way home, Abraham puts more pressure on AB for more new tracks for Jose before they go to Miami. Selena and Chris get a moment alone, in the morning, on the beach. How romantic. Their talk about what is their next step is really a flirtatious way of them saying they want to be together without really saying it. Suzette happens to watch the exchange from afar.

Vangie and AB seem to be a bit strained when she asks AB to take a walk. That is weird. Suzette confronts Selena on her feelings for Chris and that Dad will never approve. Selena deflects by pointing out that Suzette likes Ricky, but it doesn’t really work. Later, Selena talks to AB about Chris liking her, which he agrees to but not after pointing out how Dad will react or how it will impact the band. He takes a minute before the band plays to ask Chris if he likes her, which is too weird for even him, but AB figures that he does. Pete and Selena dance on stage for the duet, which works well for their fans. Selena bedazzles a gift for Chris for his guitar. AB comes up with a new a song while on the road.

Marcella finds Abraham thinking about the next move and reminds him that things are going well and he needs to enjoy the now. The two enjoy a dance, alone, as they reminisce about the past. Their new song and dance moves are a hit on stage.

Selena sees Chris after a show and finally shoots her shot by giving him a kiss that he reciprocates. Abraham yells for them to come right away, the whole band. The two of them think that they were caught, when in fact, Abraham found weed on the bus. It is a roadie’s blunt, and he is kicked out right away. The next day, Selena talks to Chris about her feelings and how she doesn’t want to sneak behind her father or get Chris fired. The two decide to just be friends. Yeah, okay. Like that will work. The two listen to “More Than Words” away from each other.

I wonder if Abraham is the type that is over-protective of his daughters. Will Suzette ever make a move on Ricky or will she always be behind Selena?