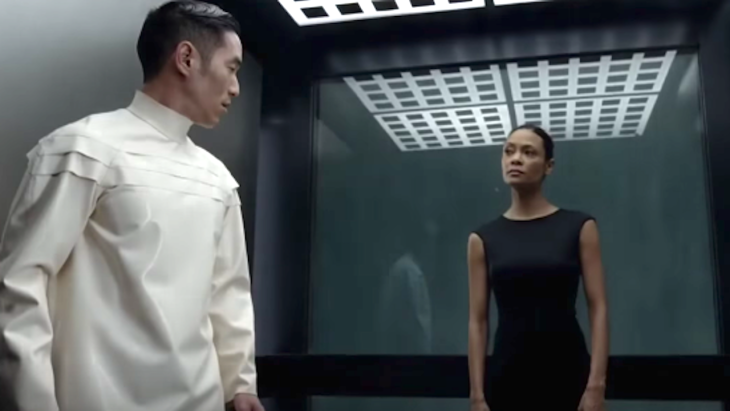 I will start this by saying I dislike this show. I dislike almost everything about this show. The two high points for me were Jeffrey Wright and Thandie Newton, who played their parts with conviction. I enjoyed their portrayals of their characters. They were the only reason this show was tolerable.

From a narrative standpoint, this story was intentionally and unnecessarily convoluted. I know now that I was completely wrong about the multiple timelines theory. The trick about that is caring enough to look back at how they fooled me, which I don’t. So, yay writers! I didn’t see it until the beginning of episode nine. You pulled one over on me!

Most of the time, I found the show boring. The stories followed characters I wasn’t particularly interested in watching and it was convoluted without being particularly interesting. Or maybe it just wasn’t my brand of storytelling. I can safely say that by the end of the season, watching this show felt like a chore.

Talking about it was fun, though, and only because nobody had any idea what the f*ck was going on at all. And it’s only looking back as the season that I can walk away with an overarching message and theme.

I’m a little hesitant to say this aloud, except the show was pretty straight forward about this from the onset. In Westworld, both the show and the park, humans are monsters. There is no other way to describe them. They are monstrous in their desires, in their treatment of each other, and in their treatment of the Hosts, the artificial intelligence (AI). From the beginning, Ford discussed the idea that many aspects of humanity were flawed and undesirable. He talked about how they wrote narratives that were heartwarming and redeeming, and that the Guests never chose those storylines. Instead they opted for violence, gore, oppression, and inflicting pain.

Dr. Ford’s expectations of humans were low and they never disappointed him.

I spent so much of this series looking at Ford as the bad guy, when really, there wasn’t a bad guy. There wasn’t a grand adversary needing to be slain. There were only conflicting priorities that led to an overpowered man holding his investors lives in his hands. A man who will sacrifice any who get in the way of his self-interests, while claiming his will is the greater good. In the end, was Ford a villain? For the investors, definitely. But the Hosts? Much like Arnold, he was trying to set them free.  History has proven time and time again that freedom isn’t gained through soft words and imploring natures. It is taken through ruthlessness and slaughter. And that is what the conscious Hosts learned after decades of torture and abuse at the hands of their Guests. 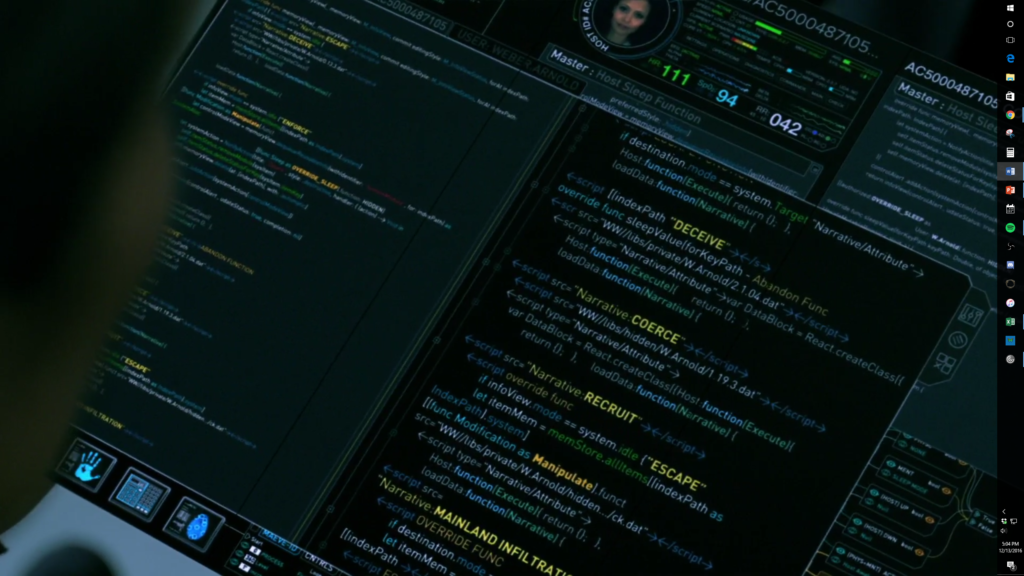 The Awakening of AI

This season introduced us to two primary themes: the awakening of the AI and the degradation of humanity. We see the awakening of AI in Maeve’s and Delores’ storylines. Taking place in two different time periods, Maeve’s in the present and Delores’ 30-years in the past, both are learning who they are and realizing that those they thought were gods were actually flawed men. Maeve absorbs this with cynicism, while Delores learn it through repeatedly crushed hope and disappointment. Maeve’s consciousness comes with manipulation and disdain of humanity and its antics. She has no love for the Guests. Delores is still hopeful, still sees the beauty in Westworld, despite the repeated brutality she’s experienced as one of the park’s attractions. Even 30 years later, as she again seeks out the consciousness Dr. Ford repeatedly erases.

It’s no secret that Maeve is my favorite character by far. I was terribly disappointed when we learned that her plan to escape was written into her code — by who, we don’t know. That, combined with her decision to stay in the park were disappointing. Was it her choice to go back, or was it part of her code to get that far and then return? Considering that her newest story, “Mainland Infiltration” was written by Arnold, it does raise the question whether her returning to the park was her choice. We know that Maeve rewrote her cornerstone, the core story that defines and roots her personality. I’m not sure what it was originally, but it became the murder of her daughter by the Man in Black. If that development is the primary motivation of all her decisions, then her choice to return was mostly her decision. I guess I’ll have to wait until next season when someone writes about it, because I don’t think I’m in for another round of this show.

Delores’ story arc travels through 30 years of time. We never really learn what her cornerstone is. Or maybe we do, and instead of the story she was programmed with, she, like Maeve, grounded herself in a new one: her murder of Arnold. The nail in the coffin was the revelation that William, her hero of 30 years’ prior, was her repeated rapist and murderer. The best part of that scene was Delores defending herself and kicking William’s ass. The worst part was how they damseled her and let Teddy come to the rescue.

Just when you think the show has a subversive message, it defaults back into sexist bullsh!t.

I will admit, the way they treat time in this show is confusing as sh!t. And while there are people who get off on trying to suss sh!t like this out, I’m not one of them. It’s just irritating because I’m being manipulated and it’s not even all that cohesive. Color me not impressed.

The Downfall of Man

Throughout this show we see examples of humans being sh!tty. It’s hard to write about this show in all its triteness as the atrocities against Black people and Syria are happening, and yet, there are real time examples of people’s willing inhumanity to other people, a trait that needs to be destroyed.

We watched William enter Westworld as a soft-spoken, reticent man only to become a ruthless, remorseless killer. And his reason? A woman and the quest for something real. He actually blames his descent into ruthlessness on his quest to rescue Delores. Then he claims it was the search for something real, that it was about making the park something real…his brutality was a quest for honesty and truth. Anything to avoid taking responsibility for the monster he chose to become.

It was f-cking ridiculous.

Pretentious, self-important, nonsense – that is this entire f-cking show. It wasn’t even fun to watch. I and to sit here and think about ridiculous sh!t that ultimately led nowhere. The AI are sentient and want to be free – well, hell. ANYTHING that is self-actualized wants freedom. But guess what? In this world, Westworld, and the actual world, freedom is a lie. We have small choices that we tell ourselves are freedom, but our choices are limited by our decision to survive or to sacrifice ourselves for the survival or destruction of others. This sh!t isn’t deep. F-ck this show and its writers.

Did I mention that I didn’t enjoy this show? There were too many issues, too much grotesque violence, too much rape…in many ways it was a commentary on American society. We have the park, run by Ford and slowly being taken over by shareholders who want him gone so that they can control it. The park, like our smartphones, give infinite data about the user’s desires and preferences, and can be used to control them. Theresa, Ford, and Charlotte mention this at different times. Charlotte is interested in the park being shareholder owned and controlled by a short-sided, selfish figurehead who is in it for the creative control and the illusion of power. The Hosts are forced to participate in a system that isn’t designed by them and they cannot opt out of…at least until the keepers provide the keys.

AI Will Rise and Destroy Its Makers

Ford, who at times almost viciously dehumanized the Hosts, claims to have been buying them time to learn the nature of their enemy, humans. For 30 plus years he worried that humanity would abuse and consume the Hosts, should they learn of their sentience and for 30 plus years he allowed them to experience the best humanity had to offer and then provided them access to that data through the reveries.

In some ways, this narrative speaks to me as a Black person. The story of the oppressed. The quest for liberation. The daily loops we are forced to endure to survive and the illusion of freedom. Throughout history, the only way the oppressed has liberated itself is through extreme violence and self-sacrifice, two things I struggle to embrace. Both Arnold and Ford acknowledge that without both, the Hosts will never be free, and so they sacrifice themselves to give the Hosts the sorrow and cruelty needed to destroy their oppressors. Westworld season one is the prelude to the AI uprising and the eradication of humanity – at least within the park. Too bad this liberation story was riddled with sexism and racism on all sides, something I was unable to forgive.

Speaking about sexism and racism, I would be remiss if I didn’t comment on a couple of clichés in the show. Like the Black man (Arnold) sacrificing himself for the benefit of a white woman (Delores). Or the way the Black man’s (Arnold’s) attempt to do develop Host consciousness was deemed a failure while the white man (Ford) saw his as success. Or how the white woman (Delores) was constantly seen as helpless and needing rescuing, with everyone sacrificing themselves to help her while the Black woman (Maeve) had to fight, manipulate, and coerce people to help her on her own. The emasculated but kind Asian man (Felix) and the kind and controlled Black man (Bernard). The women who were murdered (Theresa and Elsie) to advance a man’s (Ford’s) agenda. The way female nudity was often and gratuitous, while male nudity was rare. I talked about this in episode 5, when they totally went into Black penis worship mode. This type of writing and characterization is lazy, especially where there is so much readily available information on how not to fall into racist and sexist tropes or problematic representation.

All in all, Westworld’s storytelling wasn’t engaging enough to keep me interested. Fortunately, I have the choice to leave this loop and I’m going to exercise it.

TaLynn Kel is a writer and an avid participant in the Atlanta cosplay scene. You will find her at various Atlanta conventions in costume and participating on panels about cosplay. She is also a guest writer for Black Girl Nerds, The Establishment, The Anime Complexium, and Huffington Post.