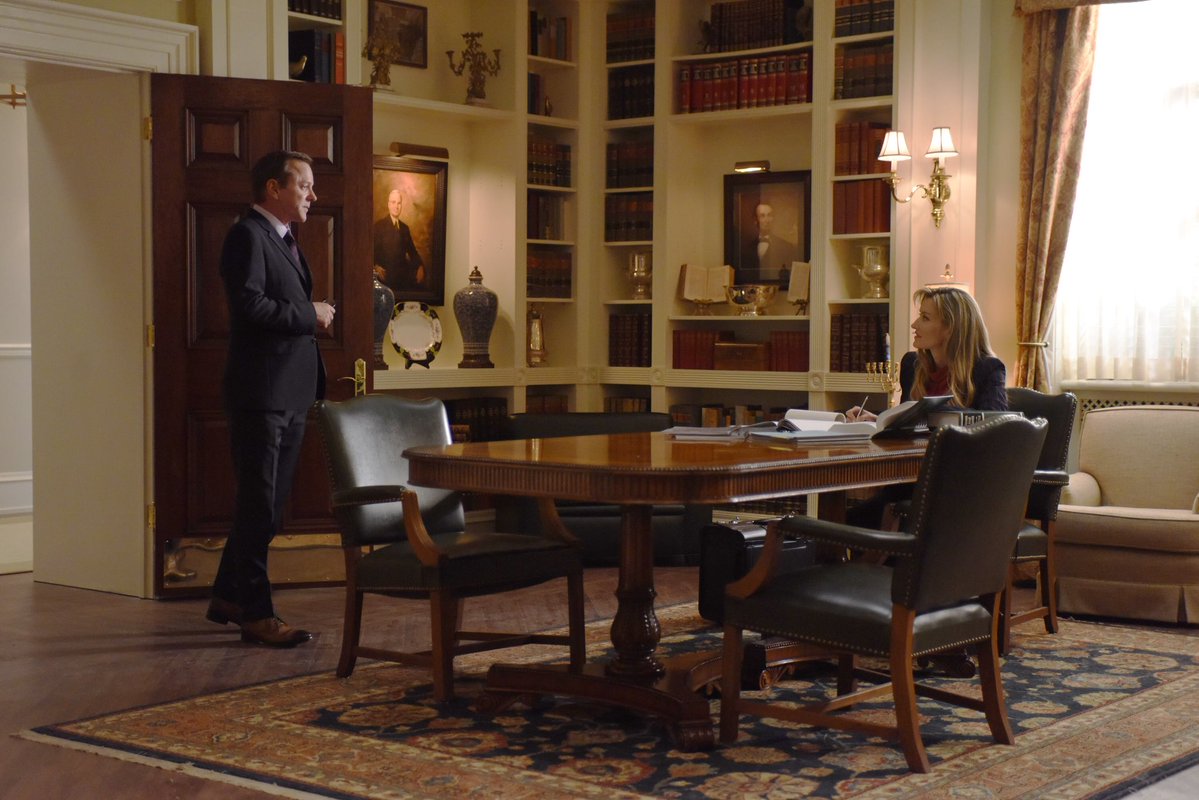 The much-anticipated winter finale of Designated Survivor has finally come. The height of the first half of season 2 has happened in the last few minutes, the other storylines are going crazy. I’m left feeling confused and unimpressed. What just happened exactly?

The episode begins with a wildfire that is spreading rapidly. The area is being evacuated, but then an occupied lodge is discovered. Inside is a religious cult who refuses to leave until their demands are met. The cult wanted their member’s child to be released from government control at a hospital and not forced to do a lifesaving surgery because it involves a blood transfusion. After attempts to talk them down, they decided to board the windows up with wooden planks to ride things out. I chuckled at that scene and even shouted at my television, “The fire will burn through those planks!!” Kirkman refused to give up and got Emily on board to help convince the baby’s mother to do a surgery on her child that didn’t violate her religious beliefs. It was nice to see another side of Emily, even though she is Chief of Staff and also an advisor to the president she is still a strong woman who can quote several verses from the Bible.

Back at the White House, Alex is still going on about her case, Kirkman decides to side with his wife and tells her to fight it how she wants. Alex and Kendra finally work with each other and come up with a plan to bait John into making the case open to the public. I wondered why it was so important for things to be public and then I quickly realized what a genius idea it was. By Alex speaking the facts of the case and how it would benefit John’s senate run, he would be pressured to throw the case out. Alex and Kendra banked on John wanting to protect his political image and they won. Finally, this case is over as it really didn’t have a purpose in the storyline; it was more of a haphazard tie-in for the last few minutes of this finale.

Speaking of purpose in the storylines, what the heck is going on with Damian? Things seemed to be all good — Hannah was seemingly falling for this mystery spy guy, who Chuck didn’t really like and Hannah never seemed to ask why. Now he’s suddenly the enemy. He’s been lying to Hannah, has ties to Russia and was caught on surveillance setting up a crime scene before Hannah arrived on site. Hannah is scorned once she discovers Damian’s deceit, not because she is heartbroken, but because he tricked her and Hannah is always on the job. Aaron (who is Chief of NSA btw, did we know this?) gives her permission to set up a sting and to bring him in for questioning. I knew this wouldn’t go well, Hannah confronts Damian on a bridge, and he tries to reach into his pocket so Hannah shoots him off the bridge into the water below. Then Hannah does something unbelievable, she just walks away. To make things worse, Damian survives thanks to his bulletproof vest while Hannah drinks her sorrows away.

At this point of the episode, the level of predictable moments let me down. Clearly, they made Hannah uncharacteristically unstable, that way she wouldn’t confirm Damian was dead. This now leaves the possibility that Damian could become the bad guy that has been missing on the show. Next comes the moment we were all waiting for, even though we all knew it was coming. Alex’s case that went on forever suddenly ended so easily and she was headed home, as she sits in the car alone BAM! A truck rams into Alex’s car in the motorcade.

I wanted to feel sad, to get upset that they took Kirkman’s wife away but I didn’t. The show never made me feel connected to her character. Alex’s character on the show never fully sparked my interest. She was either there to nag, start trouble, give the occasional pep talk, or complain about the case. Now that her storyline has wrapped I look forward to seeing what path the show will take. Will Kirkman stop being the people’s president? Will Kirkman seek revenge? Does Alex’s past have any skeletons that could haunt the White House in her death? And more importantly, is this the start or the continuation of a conspiracy to get rid of Kirkman as president?

On February 28th, 2018 Designated Survivor returns and we will see what direction they choose to go in. Here’s to hoping we get a more compelling storyline like in season 1.