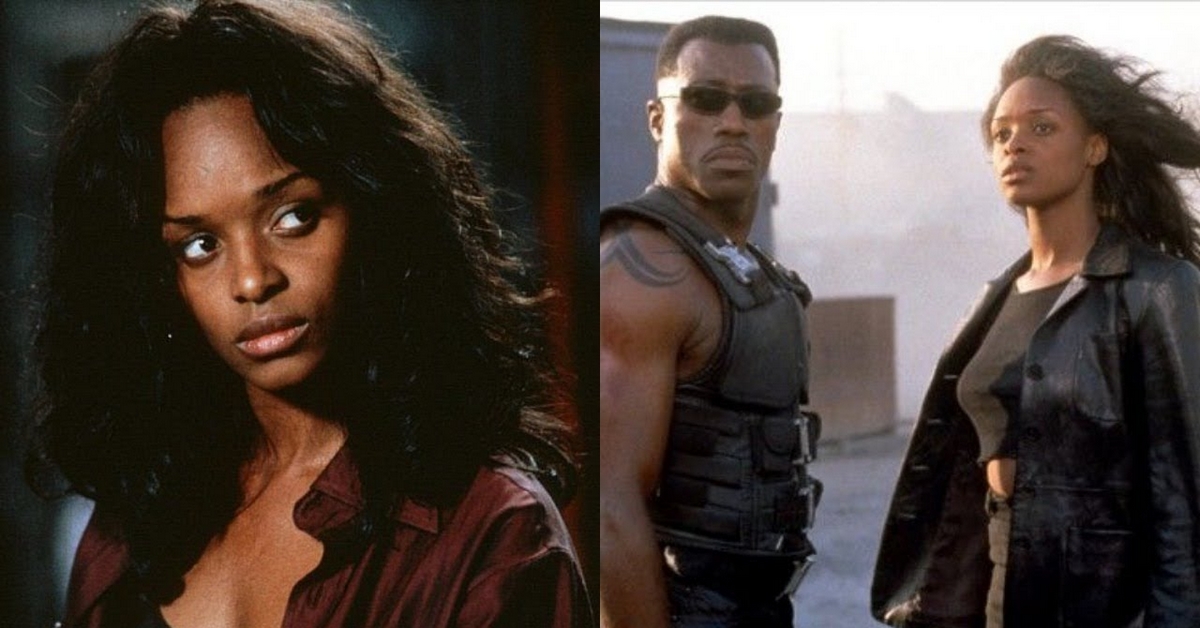 2018’s Black Panther introduced audiences to Letitia Wright’s Princess Shuri, a young Black woman whose genius in the STEM field rivals that of Tony Stark/Iron Man. Shuri’s appearance in the MCU and her possible ascension as the next Black Panther and perhaps the Queen of Wakanda inspired many young girls to be interested in STEM education.

However, Letitia Wright’s Princess Shuri isn’t the first Black female genius Marvel Cinematic Universe featured in one of their films. Before the MCU and 2018’s Black Panther, there was another Marvel movie that had its own female genius: 1998’s Blade, starring Wesley Snipes as the movie’s protagonist and N’Bushe Wright as Dr. Karen Jenson — a brilliant hematologist who found the cure for vampirism and a chemical weapon that kills vampires.

The character of Dr. Karen Jenson, portrayed by American actress and dancer N’Bushe Wright, first appeared in Marvel’s Blade in 1998, a film that heavily influenced the MCU as we know it to be today. A brilliant hematologist is plunged into an underground world of vampires after being bitten by a badly burned vampire (Quinn) who had been brought into the emergency room. Seconds after she was bitten, Blade arrived to finish Quinn, who managed to escape, leaving Blade with an awful dilemma: kill an innocent woman who’s inevitably going to become a bloodthirsty vampire, euthanizing a human whose fate is already sealed?

Blade decides to save Karen and bring her to his base, much to the disgruntlement of his human partner and mentor Whistler, who opposed Blade’s decision. Regardless, both Blade and Whistler brief Karen on the existence of vampires and warn her that she’ll become a vampire herself in a matter of days. However, Karen decides to put her wits to work and develop a cure for vampirism using her own corrupted blood as a sample towards possible healing.

She eventually manages to devise a cure for vampirism and tweak Blade’s serum, which suppresses the bloodlust he suffers from being a human-vampire hybrid. In addition, she also develops a biochemical weapon that kills vampires on a cellular level, literally making them burst. This bioweapon becomes particularly handy towards the end of Blade, when Deacon Frost, the movie’s antagonist, becomes impervious to physical attacks.

Karen’s discovery of a cure for vampirism is a pivotal plot point to the narrative of both the first Blade film and its sequel, Blade II, released in 2002. In the original, Karen offered a cure to Blade, which presented the titular hero with the dilemma of becoming a human, something he always wanted to be or remaining a monster that fights and hunts the monsters. In the second film, however, Karen’s cure for vampirism is used to cure Whistler, who was previously captured and turned into a vampire.

Despite Karen’s prominent role in the first Blade film and the significance of her antidote in the second, she is all but forgotten and never even mentioned in the sequels — a major oversight, especially when it comes to the story’s continuity or lack thereof. The cure for vampirism could be potentially weaponized to rid the world of vampires once and for all, and yet that option was never considered in the movies.

This incoherence in the narrative plagued the original Blade trilogy, which despite its shortcomings, proved a massive commercial success. By August 2012, the film rights to Blade reverted from New Line Cinema to Marvel Studios, with Wesley Snipes and Marvel discussing the actor’s reprisal of the titular role. Future plans at the time also included a potential crossover with the Underworld movie franchise, but that idea was discarded because of Marvel Studios’ plans to incorporate Blade into the MCU, this time with Mahershala Ali as the Daywalker.

The pre-production of the new Blade film is already in motion, with principal photography expected to begin in July 2022. Nothing much is known about the film’s plot, but it will release as a part of the Phase 4 MCU slate, sometime in 2023 or perhaps even 2024. Likewise, there’s minimal mention regarding the film’s cast, apart from its lead actor, begging the following question: Will and should Karen Jenson make an appearance when Blade is officially incorporated in the MCU?

According to comic book history, Dr. Karen Jenson isn’t a canonical character whose history is embedded in the Blade comics. In fact, the brilliant female hematologist doesn’t even originate from the comics; the character is created solely for the first Blade film. While the MCU’s adherence to the principle of Chekhov’s gun and comic book canon does strongly suggest that we might not see Dr. Karen Jenson in the traditional role that we’ve come to know her in from the original Blade film, this doesn’t take the character out of the running yet.

The MCU’s and Marvel’s obsessive love for easter eggs, teases, and throwbacks may very well suggest an appearance from our vampire-curing Karen in an upcoming movie as perhaps a completely different character (Blade’s mother, perhaps?). The fandom would undoubtedly love to see her in the upcoming Blade and are even fan casting different actresses for the role, including the character’s original actress N’Bushe Wright. Unfortunately, while reprising a role in a Blade future flick is possible, her reprisal of the role does remain highly improbable, given that Wright resigned acting. With all that said, Disney has developed a peculiar methodology for convincing actors to accept a role, and it almost exclusively includes a piece of paper with a substantial number of dollars written on it. So there might be hope for Dr. Karen Jenson after all.

The integration of Blade into an existing MCU roster is another exciting topic for discussion, given how MCU centered on Earth-616 until now, while Blade originates from Earth-26320. The upcoming Spider-Man: No Way Home and Doctor Strange in the Multiverse of Madness seem to be solving that particular problem by teasing and introducing the multiverse into the MCU, which could help “grease the wheels” for Blade’s crossover into the upcoming cinematic phases. It’s worth noting that the upcoming video game Marvel’s Midnight Suns feature Blade in the same universe as the Avengers, so the idea of Blade coming to Earth-616 isn’t as novel an idea as one would think.

Conclusively, Karen Jenson could prove a fantastic main cast character. Her discovery of a cure for vampirism could pose as another moral quandary for the future Blade to wrestle with and avert a possible vampire-induced crisis in one of the upcoming movies. Unfortunately, no one but Disney and Marvel Studios knows what future cinematic phases hold. It’s too early to provide any concrete facts, other than the fact that the upcoming Blade movie cast its lead actor — Mahershala Ali — and that it’s currently in its pre-production phase.