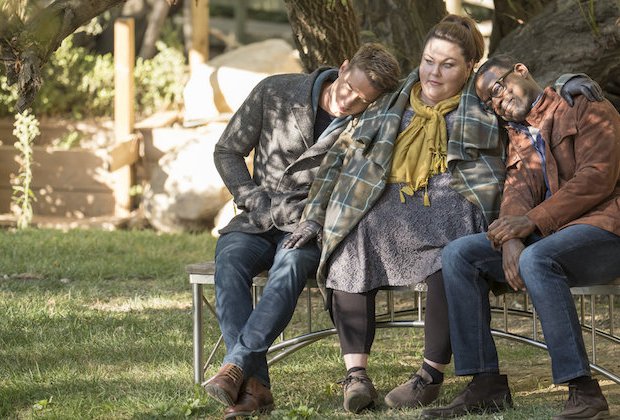 On this week’s episode of This is Us, America goes to therapy with the Pearson’s and it is rough.

In the mid-season premiere, we pick up one month after the events of the finale.  Asshole Kevin is in rehab following his DUI arrest, Kate is beating herself up about letting it happen, and Randall is woosahhing his way through not murdering him for endangering the life of his daughter, Tess.  The episode begins in flashback with the Pearsons preparing to go on a trip to the Poconos.  Kid Randall just got new glasses, Rebecca is subtly (and not so subtly) trying to manage Kid Kate’s weight, and Kid Kevin is away at football camp.  When Kid Kevin returns from camp mid-family vacay, he feels left out, a feeling that carries significance as the episode goes on.

In present day, Rebecca, Miguel, Kah-Toby (not sure if I’m sold on that ship name) and Smooth R&B head to see Kevin in rehab.  After an awkward reunion, Kevin’s therapist, Barbara (played by Kate Burton of Shondaland fame) suggests meeting only with the immediate family, leaving the spouses out. Beth, who was not at all happy about seeing Kevin to begin with, can barely contain her excitement as she shuffles Toby and Miguel out for a day at a local bar.

The therapy session starts out polite as Kevin apologizes to Kate, Randall, and Rebecca for his selfish and reckless behavior.  After some encouragement from Barbara, however, Kevin confronts his family on the role they play in his assholedness.  To everyone’s surprise, he reveals his issues may not merely be rooted in the death of his father but what transpired before his father died — particularly how he felt Rebecca favored Randall and Jack favored Kate leaving him languishing in the middle (or as the show’s episode title suggests “The Fifth Wheel”).  Kevin also drops the bombshell that he feels his tendency towards substance abuse (and Kate’s struggles with her weight) may be inherited from Jack, who struggled with alcohol.  Mandy Moore’s performance is heart-stopping as she defends Jack’s memory and takes issue with Kevin and his shit-talking therapist Barbara for pointing out a problem Jack ultimately beat.  Rebecca insists Jack was perfect and his death is what they are all struggling to overcome.  She notes neither Randall nor Kate will/have had their father for major life events.  When Instigatin’ Barbara points out that Rebecca failed to acknowledge how Jack’s death impacted Kevin, Kevin calls out his mother for never giving him as much attention as Randall and Kate.  Randall jumps in to defend his mother calling Kevin spoiled, further fueling Kevin’s anger at the connection between Randall and Rebecca.  Kevin painfully insists that Rebecca admit she loves Randall the most.  It is hard to watch as Rebecca breaks down and admits what we all know: Kevin was, and is, an asshole, and because of that she may just like Randall a little better (though she loves them both the same).  Through tears, she also reveals she harbors anger toward Kevin for leaving her after Jack died.

Wait, does this mean Randall doesn’t go to Howard?

Kate anxiously watches on with her hand to her face and tears in her eyes. She is pretty much all of us watching this beautiful family implode from the weight of all that has been left unsaid. 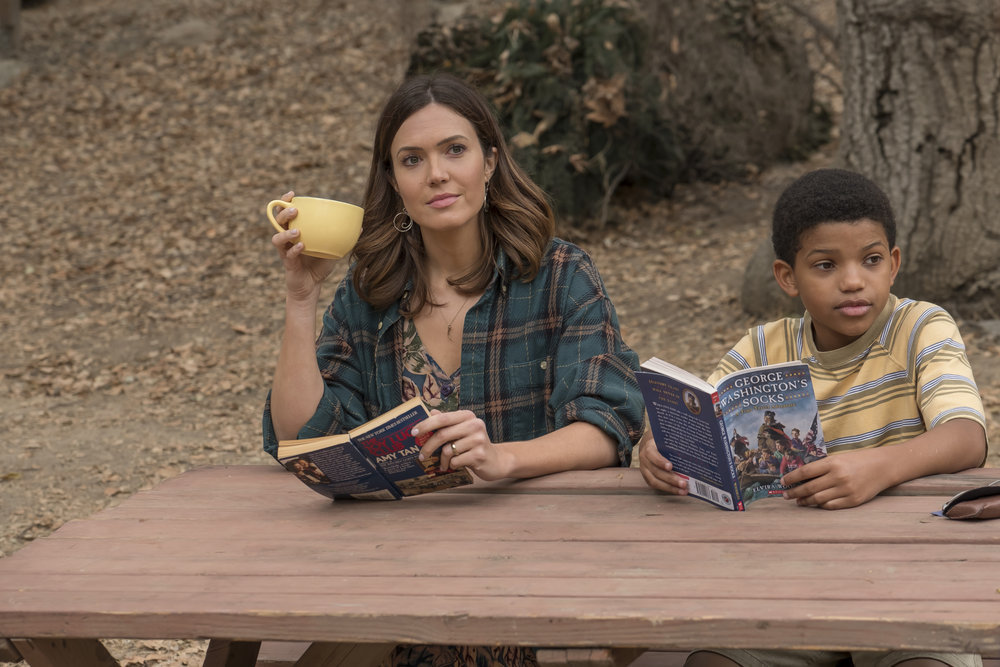 Meanwhile, in a bar nearby, Toby, Beth and Shady Miguel lament on being labeled “the others” (with a Lost reference and everything).  Toby, who is becoming oddly hot to me (don’t judge me, I’m a personality girl) confides in the other… others that Kate’s been eating secret Fried Chicken, and he is worried about how she is coping with her miscarriage and Kevin’s downward spiral.  Beth reveals that she feels resentful of the bond the Big Three and Rebecca share over losing Jack.  Miguel shuts them all down by stating the obvious: he is the shady dude that married his dead best friend’s wife (which we all know is only acceptable after the requisite fifty year mourning period and a vow of abstinence).  Beth and Toby agree over alcohol and cheesy fries that Miguel wins.

Back at therapy, Kate, Randall, and Kevin snuggle it out on a bench.  They acknowledge though they each have their own truth, they still love each other. Also, that Randall is Rebecca’s favorite. Obvi. Later, Rebecca and Asshole Kevin have time alone and she insists they had “moments” that were special for the two of them. Cue the flashback to their family vacay when she found Kevin sleeping on the floor of her and Jack’s room after he came in during a thunderstorm. There was no room on the bed because Kate and Randall were already there.  Rebecca sweetly snuggles up with Kid Kevin on the floor so he wouldn’t be have to sleep alone.  In the present day, Kevin sort of agrees, saying he “didn’t have an unhappy childhood” which is kind of like saying the food at a restaurant “wasn’t nasty.”  You may not have died eating it, but I ain’t going there. Rebecca acknowledges that Kevin’s childhood probably wasn’t as good as she thought.

I loved SO much about this episode.  The characters felt whole and real, the writing was excellent, and the acting was stellar.  I felt like I understood each character’s motivations — even Asshole Kevin.  This episode’s standout was definitely Mandy Moore. Although we had some great SKB moments and Justin Hartley and Chrissy Metz gave me all the feels, Moore’s gut-wrenching portrayal of a mother acknowledging her failures and widow stuck deifying her husband was perfection. She gets my vote for all the damn awards. All. of. them.

Next week, it looks like we will finally answer the question we have all been waiting for: was Miguel scamming on Rebecca this whole time she was married? Well, one of the questions… Miguel is definitely on my list of folks that need a good back-handed slap. Compassion aside, Kevin is still at the top.