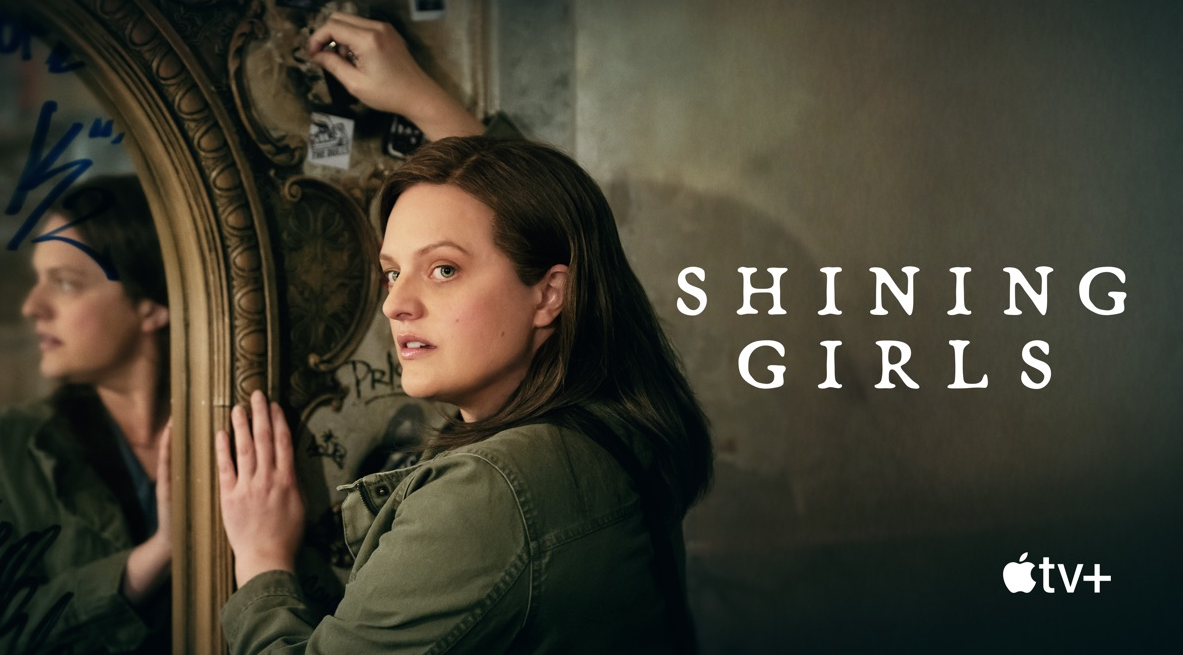 Apple TV+’s new series Shining Girls is an adaptation of the novel The Shining Girls by Lauren Beukes. Starring Elisabeth Moss, Wagner Moura, Jamie Bell, and Phillipa Soo, the series visualizes a time-traveling thriller that will have you enthralled to the very end.

Silka Luisa was at the helm, adapting the popular novel for Apple TV+. Along with a production team of mostly women, Luisa has created a serial killer story where the women are the focal point. The survivors finally have some say in their fates. While she’s mostly acted as a producer, Luisa’s passion projects like Strange Angel and The Wilding have prepared her for her first time as showrunner.

The series follows Kirby (Elisabeth Moss), aka Sharon, a young aspiring journalist who was attacked in the ‘80s. Since the attack, she experiences unexplainable shifts in her life. She keeps a journal with important facts, like whether she owns a cat or a dog, and her husband’s birthday that she just woke up to find.

It’s all very disconcerting, and you instantly feel for Kirby and her plight. A murder in the city that mimics her own causes her to investigate and find the killer before he strikes again. With the help of Dan (Wagner Moura), a down-and-out journalist trying to make his way back to respectability, Kirby tries to finally get back the control she’s lost.

I had the pleasure of zooming with showrunner Silk Luisa about the series themes.

While reading a synopsis for the book, it mentioned that Harper (Jamie Bell) had to commit the murders to continue traveling. I know that is different in the series and to great effect. Can you tell us about other changes made?

The message of the book and the themes are very much the same, but I changed the structure. The book is structured so that you’re with Harper for a substantial amount of time, and with multiple female points of view.

I focused on Kirby’s point of view because she is the character I felt most connected to. In doing that, I actually changed a lot of the mythology to work better for that structure. Much of the reality shifting comes from having an incredibly subjecting point of view.

I really did like that it focused on Kirby. It was good to hone in on one person’s experience, especially with her being the sole survivor.

I wanted to talk about trauma more pointedly. All of the mythology was built to mirror the aftermath of her trauma. All these years later, how you, out of nowhere, can just have that violence come and upend your world. It’s very isolating.

What was it like creating the timeline? We go in many different directions. What was the process like?

It was challenging [laughs]! I’m not gonna lie. In a writer’s room, if you try and really crack time, it will not work. You’ll spend days just spinning out. So the way we approached it was to keep it from a very subjective point of view. We only experience time in our narrow view. So it was always, ‘Okay, I’m with Kirby, what was her Monday? What’s her Tuesday?’ For each character, we had different charts about their own chronology.

Kirby wakes up and has several things different about her life. What do you think this says about the future, is it predetermined? Do we have a little more control over it? Or is it somewhere in the middle?

I believe the whole show is about reclaiming your narrative and finding agency. So personally, like my personal philosophy, I feel like you can always change. Just like other people can affect your string, you can affect your own string and alter things in your own life. I’m a big proponent of having agency.

I also love that it was set in the ‘90s. Not just for the nostalgia trip, but the mechanism of no cell phones and the cars and the clothes.

We did a lot of research in terms of getting the ‘90s accurate. That was really important because a lot of it was from my memory, but the series is set in a very specific place. I’m from Miami, not Chicago, and it’s set in a newsroom. It’s its own ecosystem. The lack of cell phones is fantastic for a mystery. We toyed with making it modern-day to make all of our lives easier, but having a mystery where you don’t have Google and you have to actually do door to door reporting-

Yes! I was incredibly nostalgic for it. It’s so tactile. It gets you out and really talking to people.

Another nostalgic thing I enjoyed was the way Kirby was regarded as a woman. It was so interesting because although a lot has changed… not a lot has changed. It’s interesting to think about the fact that if you’d pitched this movie back in the ‘90s where it didn’t glorify the bad guy, it probably wouldn’t have gotten made.

One thing I think Lauren’s book did beautifully was it felt like it wasn’t about the action and violence of the trauma, it was more about the aftermath. It really gave voice to the impact of the attack. It was really tricky carrying that through in terms of Harper.

I didn’t want him to be a very sexy serial killer or act like he was really smart or exciting. Kirby is the anchor. However, we spend a lot of time with him so we still have to develop him as a character and try and understand why he is the way he is.

A lot of talent contributed to directing including Elisabeth Moss herself.

Yes! We had three directors, Michelle MacLaren (Breaking Bad) who did x episodes, Lizzie (Elisabeth Moss) did two episodes and Deanna Reed, who’s fantastic, did four episodes. This was my first-time show-running which is its own experience and feat.

There were a lot of elements that were new to me, but at the same time, I’ve worked on the show for five years. So by the time we got to set it felt like I was ready. The show is in my bones. I couldn’t be more fortunate that the first thing I had was something that felt really personal, it just felt like the right thing.

Shining Girls will premiere on AppleTV+ starting Friday, April 29, 2022. Be sure to check out our season review!

Review: The Struggles Are (Sur)Real in AppleTV+’s ‘Roar’