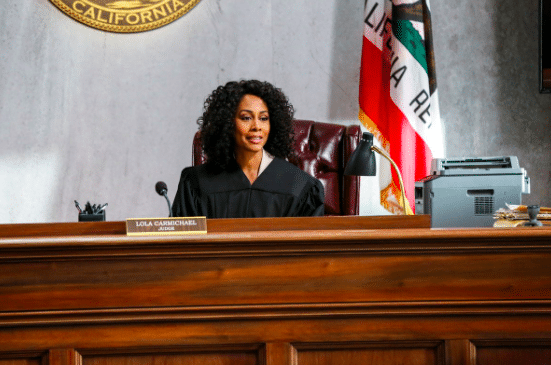 Actor Simone Missick has moved from fighting crime to enforcing criminal justice in the new CBS ordered series All Rise.

It was announced today that legal drama will premiere on CBS and CBS All Access. Back in March, Deadline reported that Missick will play Lola Carmichael. Over the course of her impressive career as a Deputy District Attorney, Lola was known to be independent, formidable and, occasionally, wildly impulsive. As a newly appointed judge, Lola suddenly has more power. So she doesn’t sit back on the bench; Lola leans in — immediately pushing boundaries and challenging expectations of what a judge should be.

The series scrutinizes the topsy-turvy world of judges, prosecutors, and public defenders and sounds like it’s perhaps All Rise is going to do for the world of legal eagles what Grey’s Anatomy did for medical surgeons.

Simone Missick is most notably known for her role as Misty Knight in the Marvel TV series Luke Cage on Netflix. Last year the series was canceled amid rumors that Disney + will pick up the show on its new streaming platform. For Luke Cage fans, sadly this is not the case as of yet. Disney + earlier this year announced its programming slate for both year one and year two. There was no mention of Luke Cage nor the other Marvel TV shows such as Jessica Jones, The Punisher and Daredevil — also canceled — were mentioned.

All Rise is from Warner Bros. Television in association with CBS Television Studios