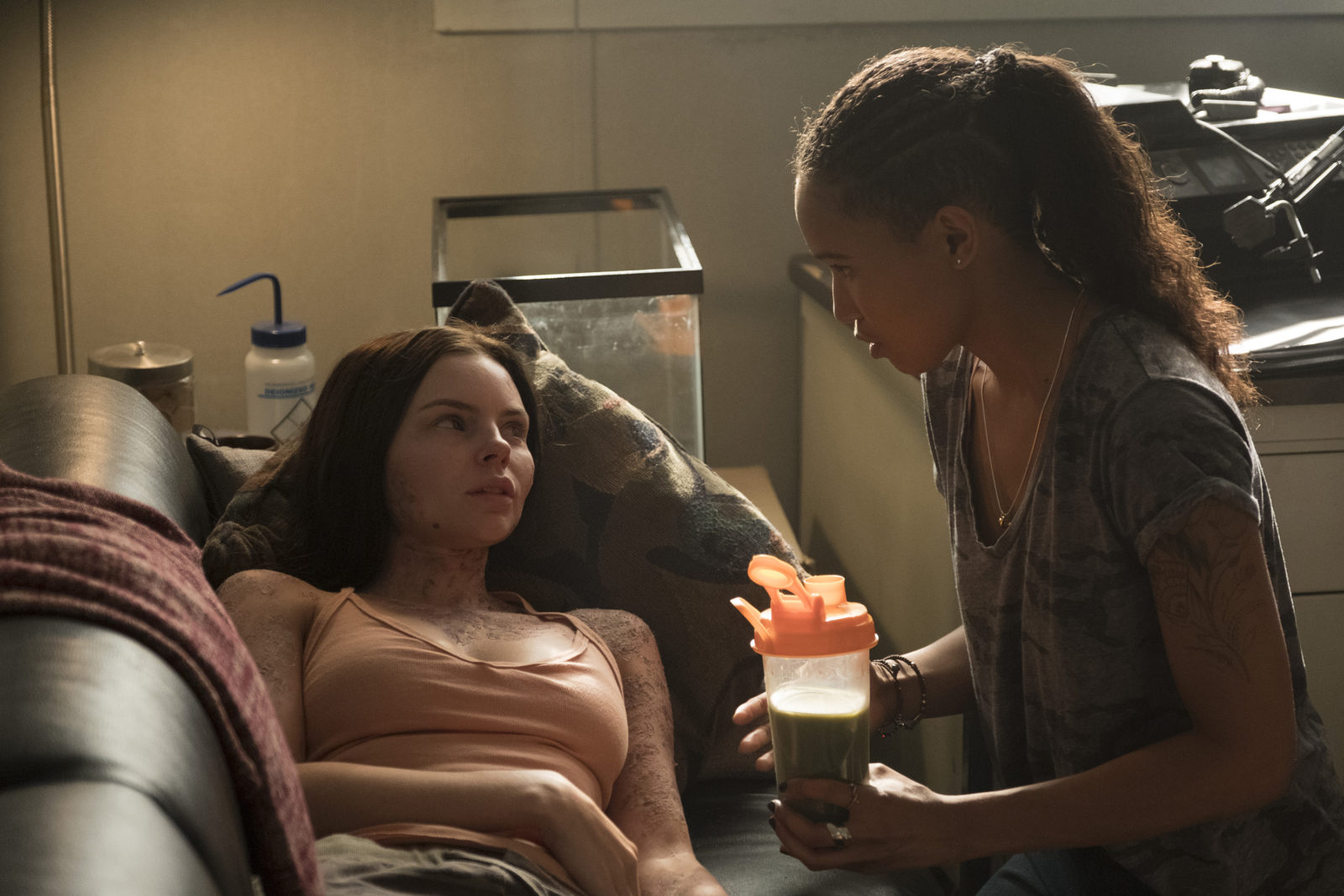 When Siren opens, we see Ryn’s sister is going through another DNA extraction. Unfortunately for the scientists, she’s had just about enough of it and hops out her tank cutting a bloody swath through the lab. Chris is woken up by the commotion and sees it as his chance to flee. As if there weren’t enough reasons to hate these military guys, it seems they’ve done nothing to actually heal Chris. They were just monitoring him. His tummy still has a hole in it. Awful.

The installation goes on lockdown, but Chris stumbles blearily and injured through the corridors until he runs into Ryn’s sister, freshly metamorphosized. They escape together by driving out the front gate of the facility while it’s on lock… you know what? This show is ridiculous and I’ve chosen to embrace it.

All things considered, Xander and Calvin have actually done a fine job on their end of the investigation. They hit a roadblock last week because they vacillated between taking bold risks and being overly timid while following their lead on Chris. They’ve been so close to blowing this thing wide open almost as soon as they began their investigation. When we meet them in this episode of Siren, their stakeout of Nurse Donna is stretching into the wee hours. They have their doubts but they’re determined.

Helen is a mermaid. … I think. If so, I’m ferociously curious about why she stays on land.  I wonder what her real connection to the Pownall family is. I can’t tell if the smell of the salve was so strong on Helen that Ryn knew to look for dry patches or if she saw something new she had missed before in Helen’s face. The “old family recipe” could have tipped her off too since she’s super intelligent.

This week’s theme is loyalty and sacrifice. Ryn feels responsible for getting Donna caught because she ventured too close to the surface for food and Donna followed her. That’s why even as she’s on death’s door she refuses to go back to the sea without her beloved sister. Xander and the gang are overjoyed to have Chris returned to them after all they sacrificed to get him back. Chris doesn’t even know Donna but immediately feels protective of her even as he’s severely injured. It makes sense that he has a group of ride or die friends when he is so loyal to Donna, his fellow escapee.

Ben and Maddie have to sadly sacrifice their time with Ryn. As she said, “land, bad.” Well, at least it is for her and mermaid Donna so off they go back home to the ocean.  Maddie and Ben look so sad when they see her swim away because now that she’s reunited with her sister, they figure she’s gone forever. Luckily, there are six more episodes so don’t be so glum, kids! I suspect things are about to get more interesting than you can even handle.