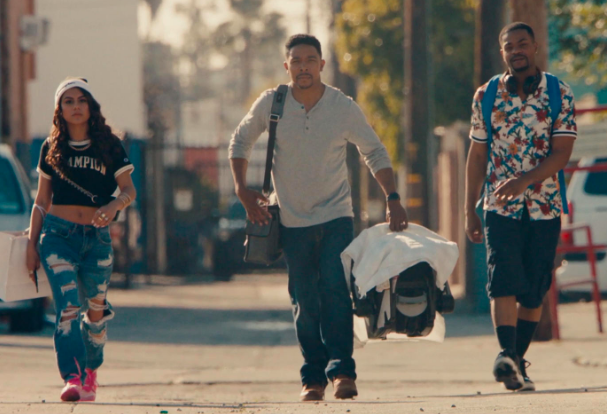 Devin rolls up at the next line searching for Nori and bumps into Bobby and Cole. Cole already has his pair, and he won’t let the storage thing go. Devin finds Nori and informs her that he needs to make cash ASAP, $300 to $5 grand. At first, she brushes him off but gives him instructions of what shoes and sizes to buy. Gia is there and questions his motives but lets him slide.

Outside, Nori wants Devin to meet one of her buyers. Bobby begs to join in and Devin concedes. Their first customer happens to be Stuey, and yes, he is quite the nerd. Stuey examines the pair of shoes and nearly puts them on, but pays $600 for one pair. He also discloses that he got fake brands, too.

Nori has quite the knowledge on fake and real brands for shoes. As the trio makes their way, Stuey shows up and requests that he shadow them. Nori agrees only if he pays fifty bucks an hour. He agrees, and I admire her hustle. Their next stop is a store full of wall to wall brands. Bobby attempts to shoot his shot with an employee but misses. Badly. Nori is able to get into the back, switch a pair of shoes for a few new pairs, then gives Devin a box for $600 with an instruction to go to a shoot flip the current shoes for Off White Jordan 1s, then bring them back to the store for a guy name Sean for his friend.

Of course, Bobby doesn’t care once they get to the shoot. He convinces Devin to go for another pair, Red Octobers, which would cost a lot more. Devin needs to stop listening to this man. Bobby convinces Devin to make a profit rather than breaking even. Just as they make the switch, their plug at the shoot is caught selling shoes on the spot. She is fired right away. The two men catch up on good times and discuss wearing shoes as opposed to buying them for display. Somewhere else, Nori and Stuey are finding him real brand shoes while also kind of becoming friends. Nori opens up on how the first pair of shoes were a pair of Retro Jordan 1s that were owned by her dad. Since his passing, she has been looking for them. Stuey’s awkward response is about selling his brother’s Xbox, getting beat up for it, and he’s been looking for it since. Poor child.

Devin and Bobby bring the Red Octobers to Shawn and find out that there is paperwork involved then a waiting period for the shoes to sell. Shawn was ready to buy a pair of Off-White Jordan 1s for five grand but the guys didn’t bring them and he has five pairs already. Devin gets them for five grand on the spot while Bobby tries to get more out of it.

At home, the dishwasher is broken. Christine informs him that they will be using a portion of their vacation money to buy a new one. She’s sure to find out soon. Devin is desperate and asks Nori for another shot, but there’s no other clients with that kind of cash. Bobby rallies the two to join him to search for the Zeros. Apparently, they are an urban myth, but Bobby shows them evidence of the pair around the world and decades. Stuey happens to be there for the presentation and wants in, but Devin never wants to hear from Bobby again. The group disperses, and I actually kind of feel bad for Bobby. He keeps messing up for his friend, but he’s really trying.

Bobby keeps calling Devin over and over again while Devin is at home enjoying movies with his family. Then he shows up to Devin’s house. Devin gets out inconspicuously, tells Bobby to leave, reminds him that Christine doesn’t like him. Bobby wants to know if Devin has thought of the plan to find the Zeros and reminds Devin of a store that they thought of five years ago. Bobby is still holding on to the dream. Devin wants Bobby to leave or he will call the cops. Instead of his dreams, Devin joins the workforce.

Devin had a good hustle there and almost got back his money. It’s clear that he is under a huge influence of Bobby. I’m sort of rooting for the guy to get the money back. but a part of me believes in dreams, too. Blame Disney, but why can’t the two guys have their own shop for tailored shoes? It may be difficult with kids and a wife but possible.